Pumps supplier to commission new slurry pumps at Gauteng mine

Hans Merensky – the prisoner of war

12th September 2014 Ninety years ago, almost to the day, South Africa’s pre-eminent geologist, Dr Hans Merensky, made one of the most important and phenomenal mineral discoveries anywhere in the world when he identified a section of the platinum-group-metal-rich Bushveld Igneous Complex near the town of Lydenburg,... → 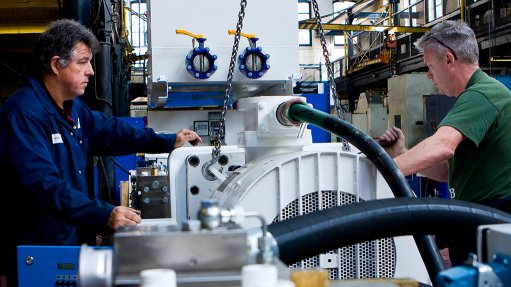 By: Pimani Baloyi     12th September 2014 Scotland-headquartered specialist slurry equipment solutions provider Weir Minerals has been focusing on enhancing its growing pump portfolio by ongoing investment in research and development (R&D) with a focus on improving material technologies to increase wear life and offer clients a lower... → BRAVO RANGE Bravo pumps can operate over the complete pump curve, not just one specific duty point, which means that it can be used in numerous applications within its range

12th September 2014 Southern African Pump Systems Development Association (Sapsda) chairperson Mathys Wehmeyer advices the mining industry and other users of submerged pumps to take into account the actual cost incurred when buying these pumps. “When purchasing a submersible pump, like any other capital equipment,... → 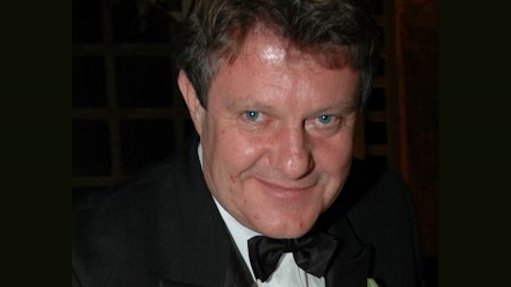 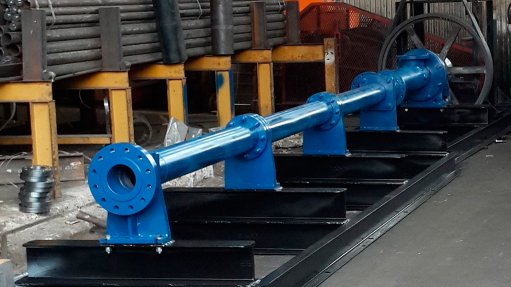 GE812 Instead of having several stages of pumps at each level of a mine, the GE812 can manage the full workload of an entire mine

20th June 2014 Engineers at Glencore-operated Boschmans colliery, in Mpumalanga, have installed 4", 6" and 8" Victaulic Style SC77 flexible couplings in both the pump systems and the large runs of pipes throughout its plant, says Boschman engineering foreman Danie Botha. The installation-ready couplings... → By: Donna Slater     13th June 2014 Local pumps supplier Aquapump’s ARO series of air-operated diaphragm pumps, manufactured by diversified industrial company Ingersoll Rand, are suitable for use in mines owing to the pumps’ lightweight construction and ability to be used in a dusty environment, which is often the case with mines,... → 13th June 2014 The XST series of centrifugal pumps, made by China-based pumps manufacturer Leo and distributed in South Africa by pumps supplier Raptech, features a robust design is suited for mining applications that require circulation and the transfer of clean and chemically non-aggressive water or other... → 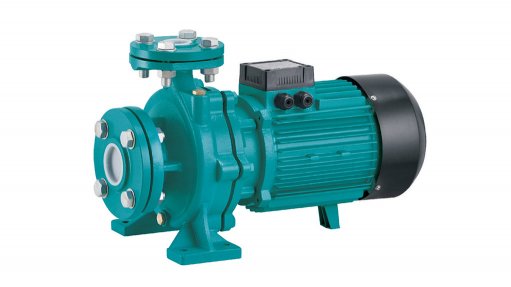 USER-FRIENDLY The rear-entry feature of the XST pump enables the impeller, the control valve and the motor to be extracted without disconnecting the pump body from the pipe 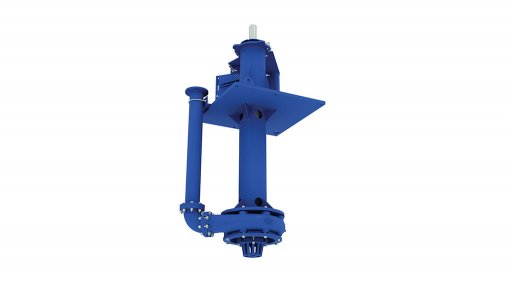 VERTICAL PUMPING The pumps allow for interchangeability of wet-end components 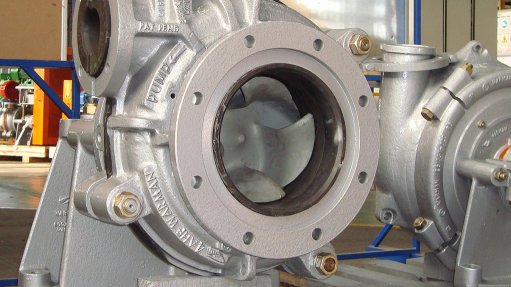 13th June 2014 The current acid mine drainage (AMD) crisis in South Africa, coupled with the impending scarcity of natural resources in the country, and the enforcement of environmental legislation, such as the National Environmental Management Act, is forcing industry stakeholders to take a closer look at the... → 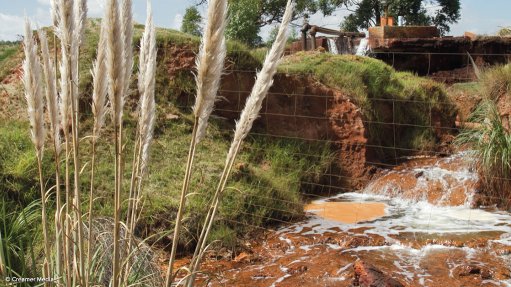 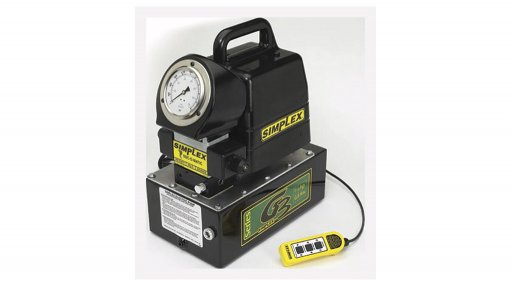 13th June 2014 The KZN series of US-based pumps manufacturer BJM Pumps’ heavy-duty submersible slurry pumps is designed to pump slurries to within a few inches of the bottom of pits, sumps or other areas that require pumping, owing to the pumps top discharge capability. → 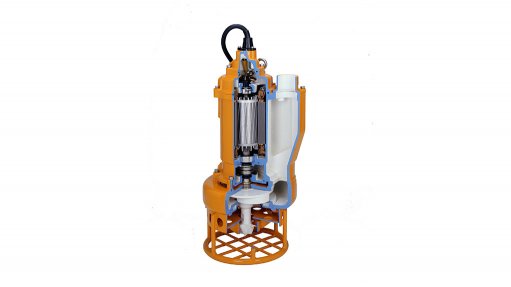 AGGRESSIVE APPROACH The agitator puts heavy solids into suspension, pumping the material away with the liquid

By: Donna Slater     13th June 2014 Centurion, South Africa-based pumps manufacturer Hazleton Pumps proprietary range of Hippo slurry pumps, for which Hazleton is the sole manufacturer and repairer, underwent power-differential testing in May, 2014 at a specialised testing facility, before a shipment of pumps could be delivered to... → 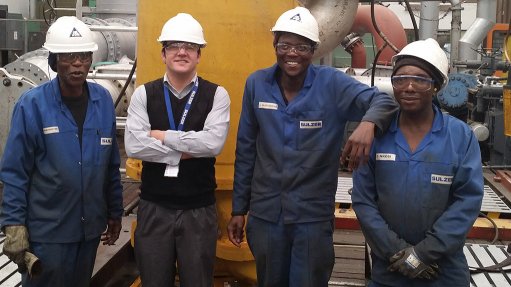 TESTING BEFORE SHIPMENT Recent testwork conducted on the Hippo slurry pump, which usually operates at 980 rpm, increased to 1 183 rpm when the power supply was switched to 60 Hz

2nd May 2014 West Africa-based pumping solutions provider West Africa Pumping Services (Waps) will take advantage of its third appearance at the West African Mining and Power Exhibition (Wampex) to showcase its pumping equipment and spare parts offering, as well as provide details about its ongoing pumps... → Seamless bend pipes to be showcased at Wampex

By: Pimani Baloyi     2nd May 2014 Germany-based polymer processing company STAR will showcase its seamless piping solutions at this year’s West African Mining and Power Exhibition (Wampex) at the Accra Convention Centre, in Ghana, from May 28 to 30. STAR develops and produces large-diameter polyethylene (PE) and polypropylene... → 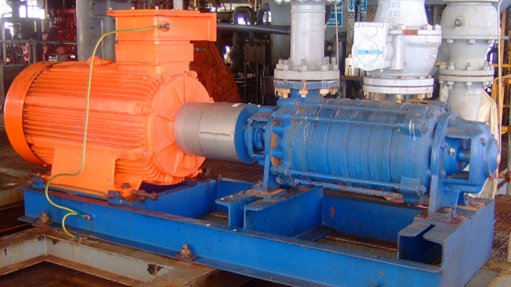 WATER PUMPS Sunbabsco will this year showcase ITT Gould’s proprietary pumps, which are ranked among the best in the world for the mining industry

Production-monitoring products to be showcased at expo

By: Pimani Baloyi     2nd May 2014 South Africa-founded and -based electronics and software solutions manufacturer Accutrak will exhibit its latest mobile-enabled software that allows mine production managers to trace real-time production volumes on a smartphone mobile device at this year’s West African Mining and Power Exhibition... → By: Chantelle Kotze     28th February 2014 South Africa-based slurry pump specialist Pump and Abrasion Technologies (PAT) aims to establish its presence in the African market more securely this year, specifically in the copper and gold markets in Zambia and Ghana, while servicing its existing contracts and expanding its contract base on... → 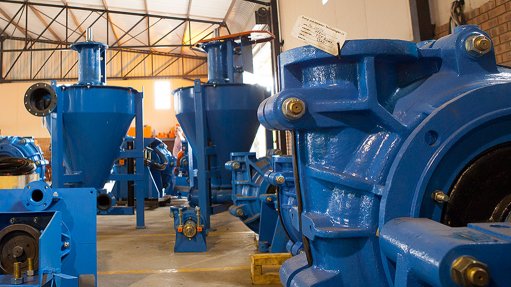 By: Carina Borralho     7th February 2014 The mining industry requires cheaper, but more reliable pumps that take up less space and use less water, which is what the TRVX pumps range from Pompetravaini offers, Air & Vacuum Technologies sales and marketing director Mark Burn tells Mining Weekly. He adds that, owing to the predicted... →

7th February 2014 Local developer and manufacturer of mining pumps and generic spares Unique Engineering is experiencing a rapid increase in the demand for replacement components. “In some instances, customers are saving as much as 40%. We believe that, owing to the weak rand, this trend will continue, and this is... →

Company reports on benefits of a peristaltic pump

7th February 2014 Pump manufacturer and supplier Verderflex says that peristaltic pumps in the mining environment have the ability to use less energy, require less space and reduce negative impacts on the environment. Peristaltic pumps are based on the altering compression and relaxation of a hose or tube drawing... →

By: Carina Borralho     7th February 2014 South Africa-based slurry pump specialist Pump and Abrasion Technologies (PAT) in November launched its Battlemax pump range in Zambia through an exclusive partnership with pump solutions company Tri-Pump.  The company highlights this as the largest market roll-out ever attempted by the Battlemax... →

30th August 2013 South Africa-based pumps manufacturer APE Pumps reports that it has completed the manufacturing of two vertical turbine pumps for return water duty at the Namoya gold mine in the Democratic Republic of Congo (DRC). APE Pumps has orders of R8-million at present, with the Namoya pumps making up... →

Training courses to be held in Cape Town in October

30th August 2013 The inaugural meeting of South Africa’s pump cluster, incorporating seals, couplings and motors in both the mining and industrial sectors, was held on February 7, and saw the cluster planning to take advantage of localisation opportunities, specifically those emanating from state-owned power... →

By: Zandile Mavuso     30th August 2013 The Department of Trade and Industry’s (DTI’s) initiative to designate industries for domestic production – where procurement is conducted by public entities, including State-owned enterprises – has motivated the inception of the pump cluster in South Africa. →

Effective use of valves, pipes and pumps could cut mines’ energy consumption by up to 40%

By: Leandi Kolver     14th June 2013 Valves, pipes and pumps that are installed and maintained effectively in pipelines could reduce mines’ energy consumption by between 10% and 40%, says valve and pipe manufacturer Rexus Trading MD Allistair Balutto. However, the skill of understanding the principles of how valves, pumps and basic... →