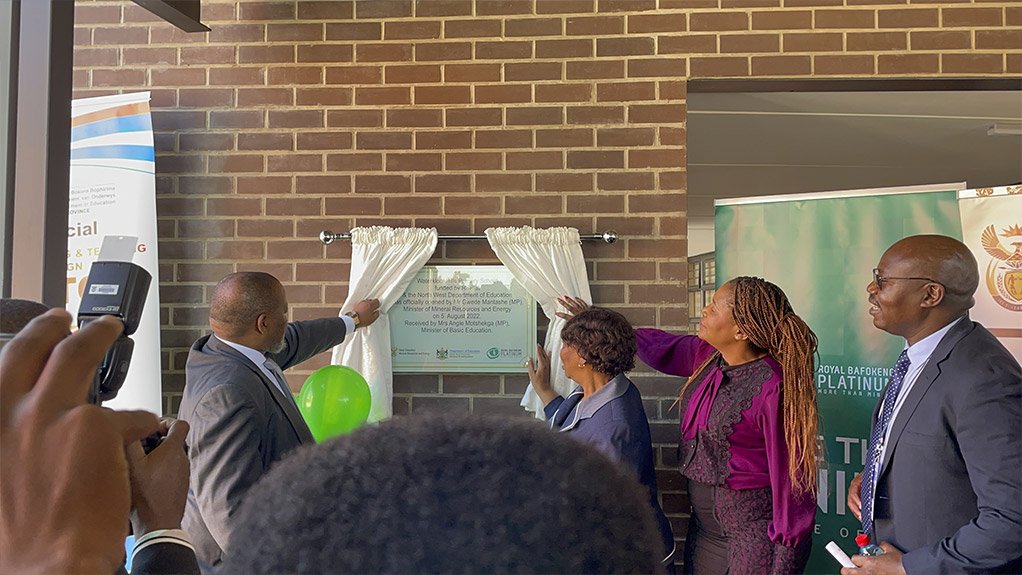 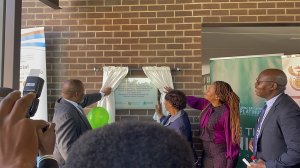 Platinum group metals mining company Royal Bafokeng Platinum (RBPlat) has provided a tangible example of its philosophy of “More than Mining”, by partnering with the North West Department of Education (NWDoE) to officially open two newly built primary and secondary schools at Waterkloof Hills Estate in Rustenburg, in the North West.

“[The union] did not demand [these schools]. Their members conceptualised the idea and reasoned with the company. Once we bought into their reasoning, we obliged and engaged the North West Department of Education,” he stated at the schools official opening ceremony on August 5, 2022.

The department did not have any resevations, and in 2019, RBPlat and the NWDoE entered into an agreement on an equal financial contribution basis to construct the much-needed primary and secondary schools.

RBPlat’s vision of providing home ownership for employees came to life in 2013, when it broke ground on the milestone project at the estate.

“By 2019, more than 5 000 people were living on the estate and the high number of children justified the construction of a primary and secondary school. Thus, the project was born,” stated Phiri.

RBPlat realised the importance of empowering communities to sustain themselves beyond mining activities.

“This community empowerment can best be achieved through education and the programmes that accompany that. Our investments in education over the years have included building classrooms and infrastructure, information and technology installations and upgrades, teacher development programmes, tertiary education bursaries and graduate programmes,” he said.

The construction project included a 1.5 km link road between the estate and the R24 at a cost of R13-million, which was fully funded by RBPlat.

The site clearing and civil works took place in December 2020, with the buildings having been constructed over the following 12 months, from January 2021 to January 2022. The schools were handed over to the department on time and were ready to launch operations at the start of this year.

The primary school welcomed 470 learners across Grade R to Grade 4, while the secondary school currently caters for Grades 8 and 9, with an enrolment of 375 learners. Plans are in place for additional grades to be phased in over the next few years, ultimately accommodating about 2 000 learners from the estate and the neighbouring suburbs.

The schools are fully equipped with state-of-the-art resources, with all classes having interactive smartboards, projectors and laptops for the educators.

RBPlat has further pledged R2-million to equip the school's libraries with books and associated learning materials, as well as the library systems, access control equipment and laptops.

“All the new, modern technology that is necessary for libraries will be installed by RBPlat,” Phiri announced during the ceremony.

While RBPlat was responsible for the successful and timeous completion of the construction of the schools, the schools will be administered by the NWDoE as per the relevant legislative protocols.

“Our partnership with the NWDoE has resulted in the successful construction of these two new schools, which will serve not only the children of our employees residing in Waterkloof Hills Estate but also those from the surrounding community. Our purpose has always been to create economic value that can be shared with all our stakeholders and this project offers a legacy of sustainable benefits, through quality education, for our next generation of leaders in our communities,” said Phiri.

“In our department, we have adopted a theme which simply says ‘it takes a village to raise a child’. This means that we cannot succeed alone and without the involvement of all other stakeholders.

At the official opening, the two schools were handed over to Basic Education Minister Angie Motshekga, by Mineral Resources and Energy Minister Gwede Mantashe.

“The infrastructure helps develop children and transform the future of our country,” Mantashe said at the unveiling.

“In the mining industry, we have something called a social and labour plan – a concept of mining companies making a social investment where they operate. It’s a fee they pay for their survival and protection, and not a favour. Mining companies must pay their social licence to communities where they stay,” he noted.

The Department of Basic Education welcomed the construction of the Waterkloof Hills schools, as it ensured that the infrastructural improvements were in line with norms and standards.

“This is now the benchmark for all new schools going forward,” Motshekga enthused.

Phiri concluded the handover by confirming that RBPlat is leaving a legacy, one which he could not be more proud of.

“It is now up to the Department of Education, the teaching staff, the learners and the parents to carry this legacy forward and ensure that our children are given every opportunity to succeed.

“RBPlat has made a difference beyond mining – we have impacted lives and are contributing to future generations in the most impactful way possible: through education,” he concluded.