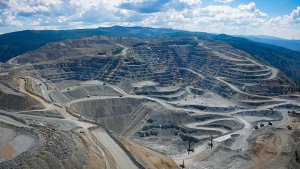 TSX- and ASX-listed Copper Mountain Mining has announced a new life-of-mine (LoM) plan, which includes a proposed mill expansion to 65 000 t/d, for its 75%-owned namesake mine in southern British Columbia.

The proposed expansion, which builds on the 45 000 t/d expansion currently under way, moves Copper Mountain to about a $1-billion asset value, says CEO Gil Clausen.

“In two years, we have more than doubled the mine life, grown the mine's productive capacity, increased net asset value and significantly decreased cash costs. Following the completion of this 2020 technical report, we will further refine the capital estimates of this project in preparation for a development decision."

The initial capital cost required to increase throughput to 65 000 t/d is currently estimated to be about $123-million, plus $25-million contingency for a total of $148-million.

The 65 000 t/d expansion plan includes the installation of a high-pressure grinding roll circuit, the addition of a fourth ball mill, a regrind verti-mill, additional rougher and cleaner flotation circuit capacity, and electrical system upgrades. The existing SAG mill will be retired.

The current plan assumes completion of construction by the end of 2023 and commissioning at the beginning of 2024.

On average, the expanded mine will produce 139-million pounds a year of copper-equivalent.