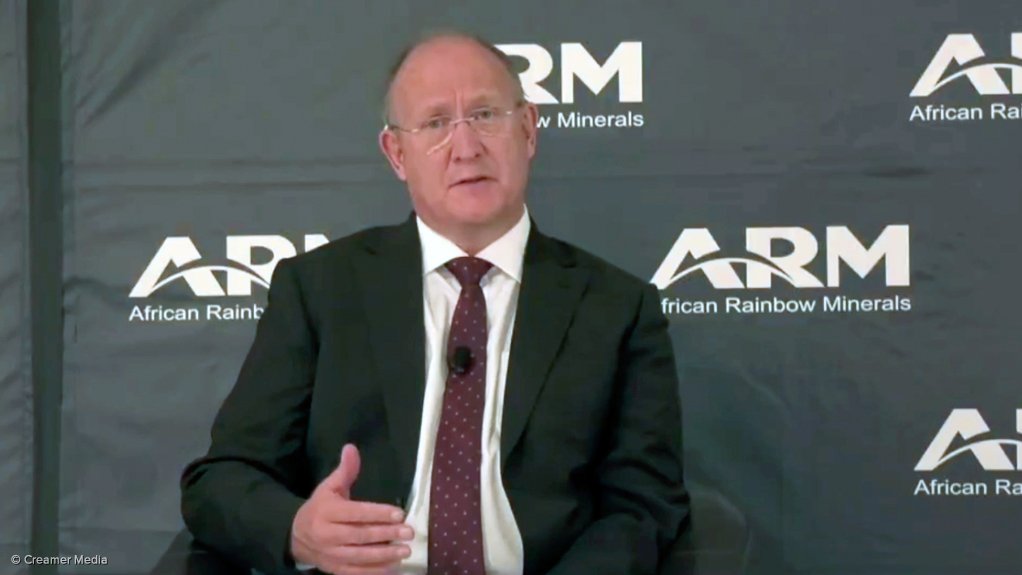 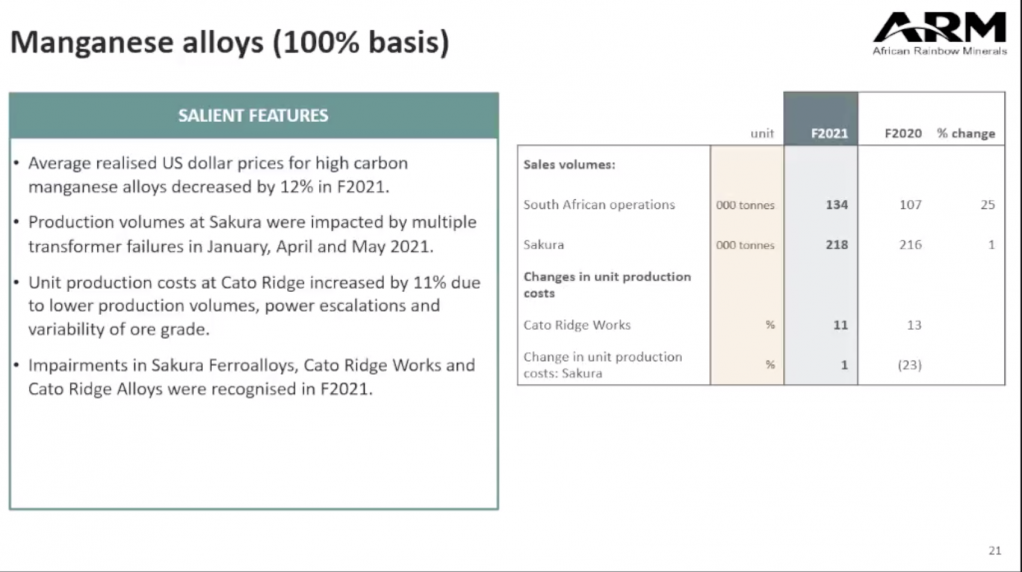 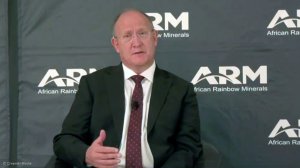 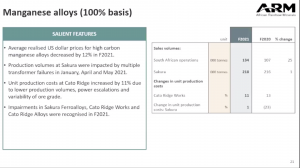 JOHANNESBURG (miningweekly.com) – Diversified mining company African Rainbow Minerals (ARM) is looking to upgrade its private rail siding from 60 t to 100 t rail wagons so that it can transport manganese ore to the Port of Saldanha in a much more efficient way.

Currently, the private rail siding at the Black Rock mine in the Northern Cape can only take a maximum of a 60 t train wagon.

“If you just do that maths, from a 60 t to a 100 t wagon, we’re get very close to our five-million tonnes,“ said ARM Ferrous CE Andre Joubert in response to questions at ARM’s presentation of record financial year 2021 results.

Transnet Freight Rail is also going to do some work on the rail from Hotazel to Sishen.

“On the manganese side, we’ve got to be careful that we don't oversupply the market. But again, in that regard, we’re monitoring the situation very carefully and we’re working again closely with Transnet on this,” Joubert added at the presentation, covered by Mining Weekly.

Assmang has very good grade of manganese ore, which reduces carbon emissions when used in the further beneficiation process.

In response to an analyst question on the potential for more direct partnership with Transnet, Joubert said ARM did not envisage going beyond the upgrading of its private siding, working with Transnet to ensure that railing all the way to Saldanha was carried out in a much more efficient manner.

“Transnet will do the same number of trains but every train will take more material down and that will be hugely beneficial to us.

“Just for the record, in Assmang we don't use any road transport whatsoever and we assess the market conditions regularly to make sure that we’re in good balance with what the market demand is,” he added.

On the water issues suffered by the company, Joubert described the effort made as being huge.

He said that ARM Ferrous,through Assmang, was taking a major leadership role in water in the Northern Cape area as part of a special project team assembled by Minerals Council South Africa.

“We’re really driving that process hard, having literally daily meetings with the Sedibeng Water Board and through that with the project teams involved in the Vaal Gamagara Water Supply Scheme upgrade.

“We’ve had meetings with the previous Minister, even meetings with the new Minister, and we’re also putting our own skills set in. The Sedibeng Water Board has allowed us to do a full audit of the water pipeline system. In that, we identified critical elements in that water pipeline to upgrade it and fix it. Yes, we did have a very bad run on that water from January, but since June we can see a significant improvement in the water outflow there.

“I think that going forward, water will always be a huge risk in that part of the world. But with the interventions that we’re leading there and in support with Sedibeng Water Board and the Department of Water Affairs, I can already see a turnaround in the water supply and through that process collectively again, like we do with Transnet, we can assist the water board; and we are doing that and we’re seeing the benefits of the improved water supply system.

“We’re also doing a lot of work for inter-mine water. We can already see the improvements that is bringing forward and I believe that we’re going to see a much better supply of water going into our Northern Cape mine, specifically Khumani iron-ore mine and also the Black Rock manganese mine,” Joubert said.

The Black Rock manganese mine modernisation and expansion project are more than 90% complete.

Once the underground ore handling systems are commissioned, the mine will realise the efficiency and productivity improvements, which will lead to lower costs and over time allow the mine to ramp up to five-million tonnes a year.

“We haven’t managed to capitalise on that because unfortunately we lost our transformers, which failed on us and had to be sent away and upgraded. They are currently finalising them and they are flying them back in. We hope to commission by the end of September so that we can start up the second furnace at Sakura,” he said of the beneficiation that takes place in Malaysia.

In response to Mining Weekly, Schmidt reiterated that South Africa was endowed with the highest grade manganese and held a significant portion of the manganese market.

“But we also have to follow the supply-demand fundamentals, and you don’t want to chase your own tail and put prices down. The market dynamic is a key component,” Schmidt said.

The next manganese challenge, said Schmidt, would be to study how successful integration would be and whether there was an opportunity to look at integration and instead of just exporting, whether opportunities to beneficiate locally had not resurfaced following Assmang’s exit of the alloy business in South Africa owing to high Eskom electricity prices.

“We’ve seen how we had to exit the alloy business over time and how that dynamic has changed but that does not mean that new technologies do not come forward and there’s again an opportunity in local manganese alloy production.

“What’s important for manganese overall is, because we’re land bound and because of the logistics costs of getting to the port, we must make sure that we utilise rail and not use truck transport, which is very expensive.

“The combination of that is important. Thus, consolidation now makes sense. There are a lot of shallow openpit assets that ultimately have to go underground whereas all of our manganese assets are underground resources.

“But recently good quality is in demand, we need to see whether we can balance that as a group and whether manganese in a consolidated form would make sense provided we get the rail allocation accordingly and do not oversupply the market,” said Schmidt.

ARM executive director Thando Mkatshana said that the short-term coal supply contracts signed with Eskom about 12 months ago had not been renewed.

“We do from time to time assess the best opportunity to sell our coal, with the preference on the export market where applicable. However, given the challenges that have been raised with regard to Transnet Freight Rail’s performance, there is an opportunity to sell some of the coal domestically,” said Mkatshana.

ARM’s domestic coal sales were 40% lower in the 12 months to June 30 and its export sales volumes were 1% down. The mine has significant stockpiles which ARM intends monetising as demand improves. Production costs at the GGV mine were up 17% to R506/t and up 7% at the PCB mine to R520/t.

“We also recognise that we have got what we refer to as transitional obligations in South Africa and worldwide. There are hundreds of millions of people who are still in industries that have to decarbonise and we have an obligation, particularly in South Africa as well as in Africa, to work with all stakeholders, provide workers with skills and expertise for the new industries that are emerging and also to ensure that the commitment we have to keep this planet safe are effectively implemented,” Motsepe said.