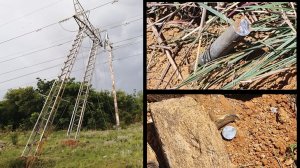 Eskom CEO Andre de Ruyter has confirmed that the collapse of a distribution-line tower providing power to the coal conveyor system at the Lethabo power station, in the Free State, was a “deliberate act of sabotage”.

The sabotage occurred at about 18:00 on Wednesday November 17 and was implemented in such a way as to ensure that the tower collapsed on to a second distribution line, providing double redundancy to the conveyor system.

Eight of the H-frame tower’s 24-mm cable stays were deliberately cut either with a hacksaw or an angle grinder, and the tower was also directed to fall uphill so as to deliberately damage the second distribution line.

Had it not been for the efforts of the utility’s distribution staff to restore power supply to the conveyors via an innovative engineering solution, Lethabo would have shut within six hours of the incident.

This is significant as Lethabo is Eskom’s best-performing coal plant currently and if its 3 600 MW capacity had been lost on Wednesday night, far more intensive load-shedding would have been declared.

In fact, De Ruyter said that Stage 6, or 6 000 MW of rotational cuts, would have been necessary on November 17, instead of the Stage 2 that was implemented.

Eskom is working with the Hawks unit within the South African Police Service to investigate the incident, which occurred in an area that has never before been considered a cable theft hotspot.

De Ruyter said the fact that nothing was stolen from the site also pointed to sabotage, rather than an economic crime.

He declined to speculate on the motive, saying only that it was “extremely disappointing” that certain individuals would actively seek to increase the intensity of load-shedding and its negative economic consequences.

Eskom also refused to comment further on a forensic investigation under way at the Matimba power station, in Limpopo, where three units tripped on November 17 when a team working on the dry-cooling fans at the power station allowed an extension cord to drop on to the transformer at Unit 2.

This resulted in a flash that tripped the station board, shutting off cooling to Units 1, 2 and 3, causing the three units to shut down.

De Ruyter said previously that he had difficulty believing that the incident was entirely coincidental.

The utility would beef up its security in and around its power stations in light of the incidents, but would not be drawn on the type of actions it was taking or how much it would spend on the security effort.

De Ruyter did indicate, however, that infrared drone technology was being deployed along with intelligent camera solutions, while new private security companies were also being employed at various power stations.

Asked whether sabotage could trigger the blackout that Eskom had been assuring the public was not likely, given the deployment of load-shedding to safeguard against such an event, De Ruyter said he did not want to create undue alarm.

“[But] can we cope with any concerted attack, and I think it’s appropriate to use that word, on a number of key elements of our system simultaneously, I don’t think that is a scenario that we want to contemplate.

“We have mechanisms in place to avoid a total blackout, load-shedding being the primary mechanism we use but, of course, we can only lose so much capacity.”

He said that the Lethabo incident had highlighted the utility’s vulnerability, particularly given its extensive transmission network, involving more than 390 000-km of lines.

Besides Eskom’s internal security efforts, there was thus also a need for the State security and law enforcement agencies to play a direct role in identifying the threat, as well as the culprits, and in ensuring that they were apprehended and prosecuted.