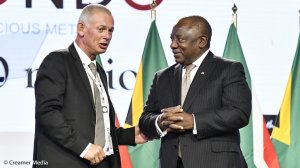 JOHANNESBURG (miningweekly.com) – Platinum group metals (PGMs) mining and marketing company Impala Platinum (Implats) affirmed at the South African Investment Conference on Thursday that it would commit close to R50-billion to its Southern African capital investment programme over the next five years.

The investment capital would be targeted at the group’s mining and processing assets, across stay-in-business operations and new growth projects, the JSE-listed platinum major, headed by CEO Nico Muller, stated.

“Southern Africa is the world’s largest source of primary PGMs supply, and Implats’ investment in increased beneficiation capacity and extended life-of mine (LoM) development at several of our operations will position the country more competitively as a global mine-to-market PGM producer,” Muller said in a release to Mining Weekly.

Implats has committed up to R12-billion over the next five years to expand its South African and Zimbabwean smelting and refining facilities, which would, it said, benefit the region’s production, reduce its environmental beneficiation capacity footprint, and bolster increased local beneficiation.

An initial $521-million (R8.2-billion) would be invested in the expansion of existing Zimbabwean smelting capacity and the construction of a sulphur dioxide abatement plant to mitigate air quality impacts.

Access to hydropower would be supplemented by electricity provided by a 35 MW solar plant, which would be expanded to 185 MW in a phased approach. This would improve the environmental footprint of the Zimbabwean smelting facilities.

This expansion will accommodate an additional 600 000 oz of six element (6E) PGM ounces a year, which post-smelting would be transported to Implats’ South African processing facilities for further refining and in support of local beneficiation.

The extra smelting capacity would service new Implats projects and provide additional treatment capacity for third-party customer requirements. In addition, the increased concentrate production from Implats’ Zimbabwean operations would be brought to South Africa to refine at the group’s Springs refineries, in Gauteng, thus contributing to South Africa’s beneficiation of precious metals.

Moreover, Implats would invest a further R4.4-billion into improving its South African processing facilities. Some R500-million, the release stated, had already been approved to expand treatment capacity by 10% in the medium term at its base metal refining facilities in Springs.

In addition, feasibility studies into further capacity expansions at Implats’ South African base and precious metals refineries were well advanced.

LIFE-OF-MINE EXTENSIONS TO SUPPORT ENDURING BENEFITS FOR ALL STAKEHOLDERS

Implats also confirmed that it would invest more than R8-billion across its South African mining operations over the next few years – including attributable capital at its joint venture.

This investment would extend the LoM at existing producing mines and secure employment, entrenching South Africa’s status as a stable and sustainable global PGMs producer and supporting enduring benefits for all Implats’ stakeholders.

In partnership with African Rainbow Minerals, Implats had committed R5.7-billion to the construction of a new Merensky project at the Two Rivers’ Platinum Mine.

Implats has a 46% stake in Two Rivers, but 100% of the 180 000 oz of the 6E PGM project's production will be treated through the groups’ smelting and refining facilities.

A R5.1-billion investment at Implats’ Marula mine will increase the operation’s LoM by about 17 years and expand capacity by 40 000 6E PGM ounces a year.

Together, these projects will increase local beneficiation by about 220 000 6E PGM ounces a year from 2028 onwards.

Together with several other LoM extension projects at the group’s Impala Rustenburg operation, Implats is confident in its ability to both sustain and grow total refined supply of 6E PGMs from its Southern African assets over the next decade.

Implats’ proposed acquisition of Royal Bafokeng Platinum (RBPlat) would, the release stated, provide benefits for South Africa. The transaction would, it added, create sustainable employment in the North West province and deliver meaningful extensions to the expected LoM of Impala Rustenburg and the acquired contiguous assets of Boschkoppie and Styldrift.

“The proposed RBPlat transaction will secure a Western Limb production base to enhance and entrench the region’s position as the most significant source of global primary PGMs production, and it will deliver tangible socioeconomic benefits for the region, its communities, and South Africa,” said Muller.