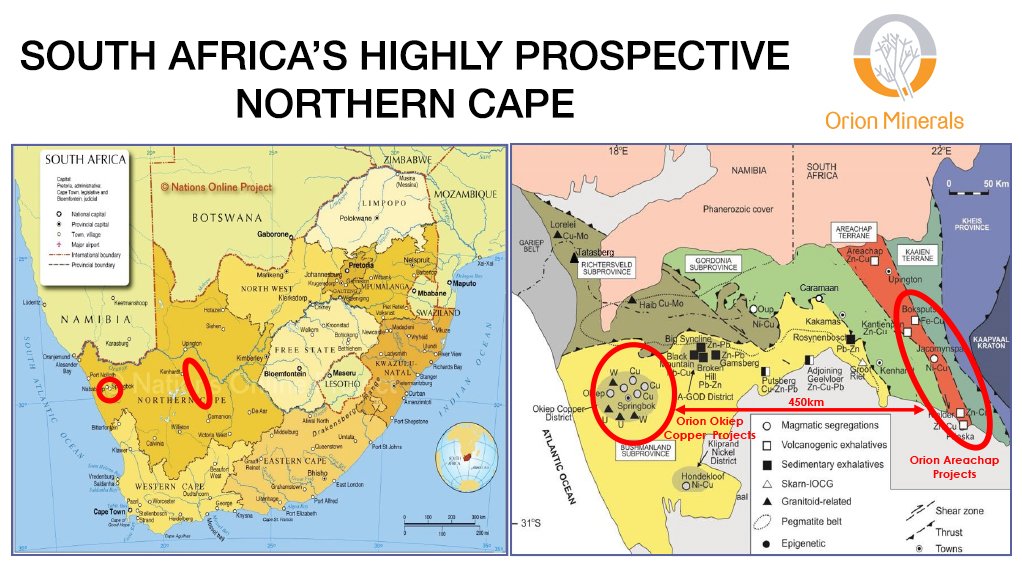 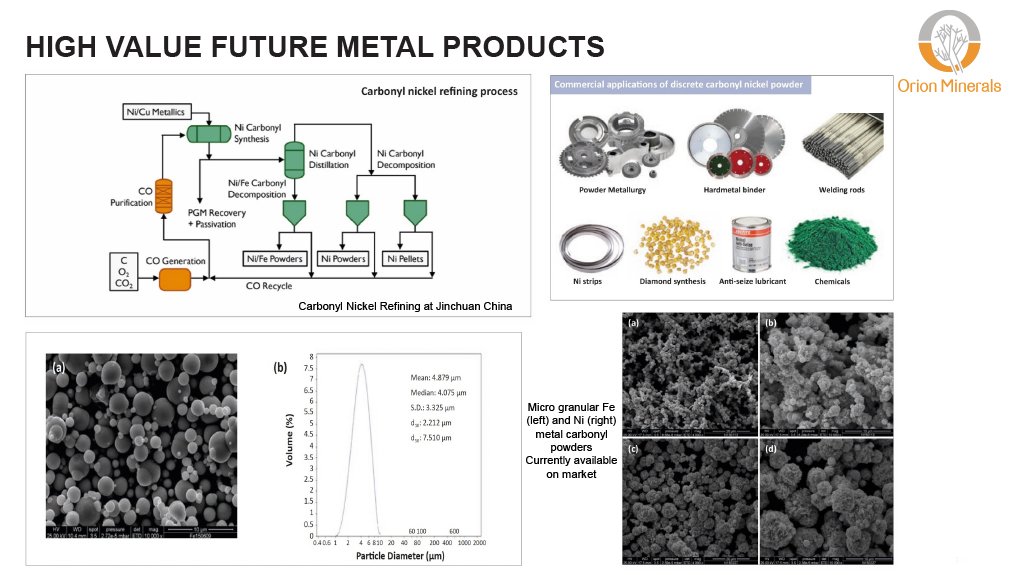 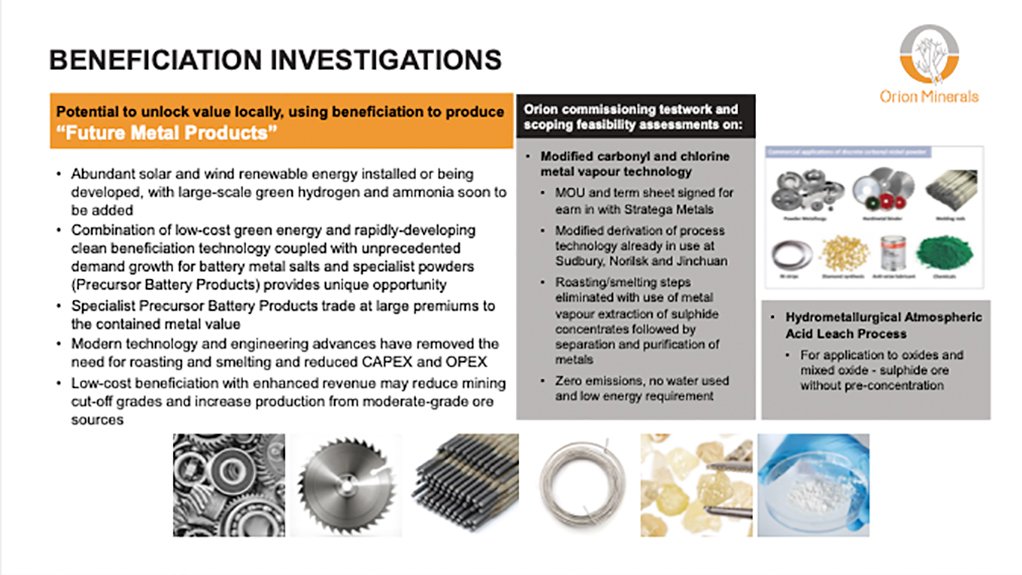 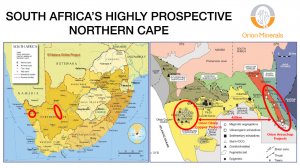 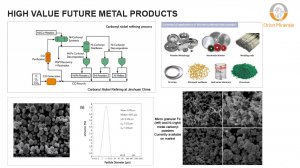 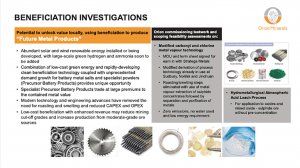 JOHANNESBURG (miningweekly.com) – A mine that produced some of South Africa’s best copper and zinc concentrates back in the day is capable of being brought back into production in 19 months after reconstruction go-ahead.

Only a very little portion of equity is still required for the restart of the Prieska copper/zinc mine, which Anglovaal discovered in 1968 and operated for 20 years.

“This is going to be a big game-changer for us,” Orion Minerals CEO Errol Smart told the Resources Rising Stars 2022 Gold Coast Conference in Australia this week.

“We’re going to be mining that openpit and the pillars for the first three years before getting into the large orebody – a big, lazy slab of 9-m- to 30-m-thick mineralisation that is folded but easily mined in fantastic mining conditions,” said Smart.

“It’s within our means to get under construction within the next six months and be in production 19 months later,” he added.

Anglovaal mined the steeply dipping limb down to 970 m, a point at which the orebody rolls over and flattens.

This resulted in a critical decision having to be made in the early 1980s, which resulted in Anglovaal deciding against investing in new infrastructure at a time of political change in South Africa and opting to move up to the Zambian Copperbelt.

In the asset the now-defunct South African mining major left behind, the Sydney- and Johannesburg-listed Orion has drilled up 30-million tons of compliant resources.

“It’s open in every dimension. Some of the highest grade and thickest intersections that have been drilled on this orebody are on the edges of our current compliant resource. We’ve got downhole electromagnetic surveys which show that the orebody continues,” Smart told the conference covered by Mining Weekly.

Some of the nine-million tons of remaining pillars contain more than a million tons in orebody thicknesses of up to 49 m.

“We’re going to be able to extract by putting in backfill because all our mining is going to be with cemented backfill,” he said.

A full bankable feasibility study of the fully permitted project is complete and Orion could go on site tomorrow and start building the Prieska project.

The challenge up to now for the $100-million Orion was the initially calculated $500-million to turn the project to account. But this cost has been slashed overwhelmingly to $200-million by opting to mine the openpit and the pillars ahead of going full tilt into virgin orebody, slowing dewatering plans, which allowed for the plant to be half-scaled to 1.2-million tons a year.

Lining up the $100-million company to finance the now $200-million project has been considerably easier, with the first $140-million already secured through a streaming arrangement and giving up 4.5% of revenue over 12 years to secure another $87-million. Moreover, South Africa’s Industrial Development Corporation (IDC) this week finished its due diligence, which is linked to $20-million from the IDC.

“Now we’ve got a very small little portion of equity that is required to build this mine. It’s within our means to get under construction within the next six months and be in production 19 months later. This is going to be a big game-changer for Orion and it changes the entire economic outlook for Orion.

The first job of Boksburg-born University of the Witwatersrand geology honours graduate Smart, 55, was as a geological stope observer at Vaal Reefs Gold Mine.

At this week’s conference on Australia’s Gold Coast, he began his presentation by emphasising the exceptional opportunity of working in South Africa’s Northern Cape, which makes up 30% of the surface area of South Africa while hosting only 3% of South Africa's population.

The area where Orion has its projects, which also includes O’Kiep, has produced more than 2.5-million tons of copper in the last century but currently produces none – not because there are not large volumes of it left but because it was abandoned in the 1980s and 1990s as we went through low metal prices while government and mining systems were changing in South Africa.

In this prolific mining area, India-based Vedanta Zinc International is building an eight-million-ton-a-year milling operation that will produce half a million tons a year of zinc, to become one of the biggest zinc production hubs in the world, Smart noted.

Orion itself has tied up two mineral belts that are 450 km apart with what he described as “a complete smorgasbord of minerals”.

“It’s incredible. There almost isn’t a mineral that cannot be found on our ground, that hasn’t been mined on our ground – copper, zinc, nickel, gold, rare earths, lithium, beryllium, tungsten and almost everything, and we managed to go in at a time when nobody was active and we got a first-mover advantage," he said.

Orion has 3 500 km2 of mineral rights in the area and has flown the first high-powered electromagnetic (EM) airborne exploration survey – “and every hole that we drilled on an EM target has hit base metal sulphide mineralisation”.

“You don’t have to be a genius. It’s actually very easy to do it in the Northern Cape,” Smart, who chairs Minerals Council South Africa’s junior and emerging miners' leadership forum.

Abundant solar and wind renewable energy is installed or being developed, with large-scale green hydrogen and green ammonia soon to be added.

There is excellent opportunity to deploy environmental, social and governance (ESG) across the entire value chain, from time of discovery all the way through to producing precursor battery mineral products on site.

Modern technology and engineering advances have removed the need for roasting and smelting and reduced capital expenditure and operating expenditure, opening the way for low-cost beneficiation with enhanced revenue that may reduce mining cut-off grades and increase production from moderate-grade ore sources.

Orion, which has become a flagbearer for modern junior mining in South Africa, has about four-billion shares in issue – “yes, ouch, eventually we will do a consolidation, but not until we are in production”, Smart insists.

“We’re not going to be doing a share consolidation now because that’s not going to be good for us. Our largest shareholder, Tembo Capital of the Netherlands has a 23% shareholding. They are very supportive shareholders. They really understand the geology and they’ve been great all the way.

“Delphi Group, a German investor group, with 13.1%, again very supportive, and between Tembo and Delphi, basically 40% of our share register is European based and registered.

“We’ve also got IGO Limited of Australia on our register with 3.5%. Their geologists love this because the reason why we went to the Northern Cape is because we had been very active in Australia’s Fraser Range belt and did a joint venture with IGO in Australia.

“IGO geologists recognise that what we do is identical geology – the same major rocks, the same geotechnical setting, the same types of deposits, and when you look at the drill core, you’d swear that you were looking at a drill core out of the Fraser Range,” said Smart. Orion chairperson Denis Waddell’s Tamey Holdings of Australia holds 2.8%.

The 30% of Orion shares on the JSE register are fully fungible with the ASX with 30% of the shareholding South African, 30% Australian and 40% European, with a growing European influence.

There are some big names on board including Tom Borman, a former BHP CFO, and Godfrey Gomwe, a former CEO of Anglo American Coal, both people who know the South African environment.