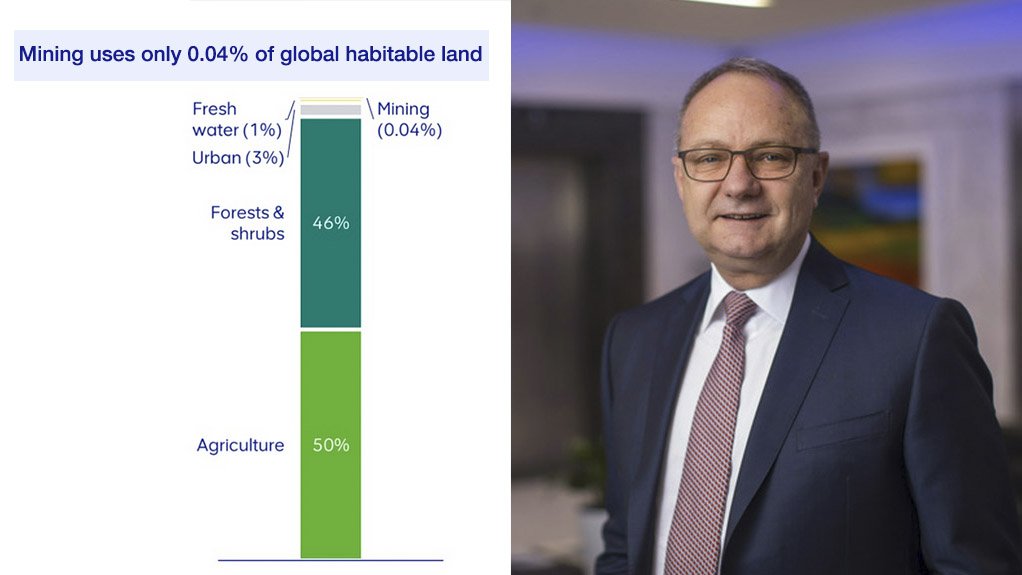 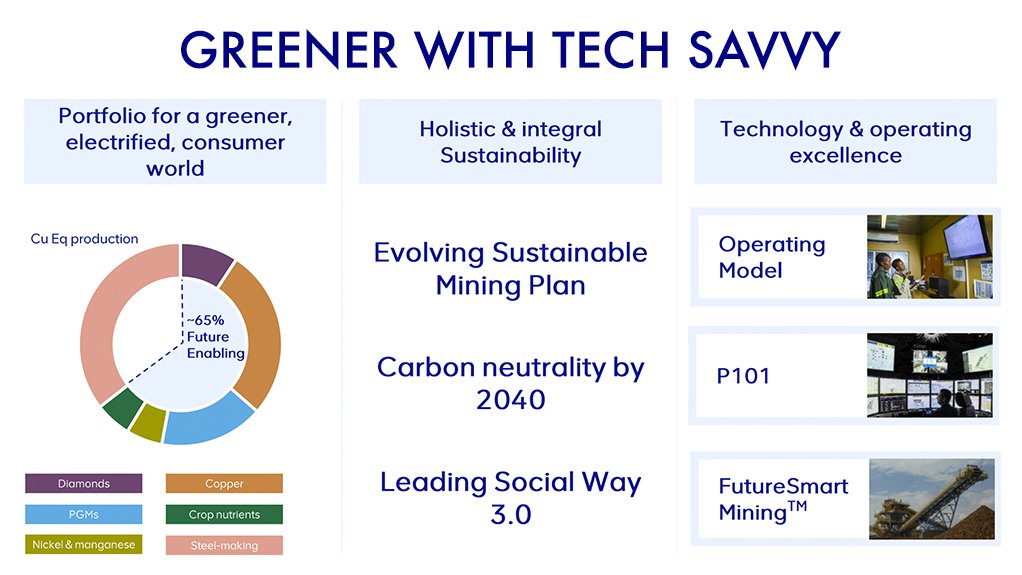 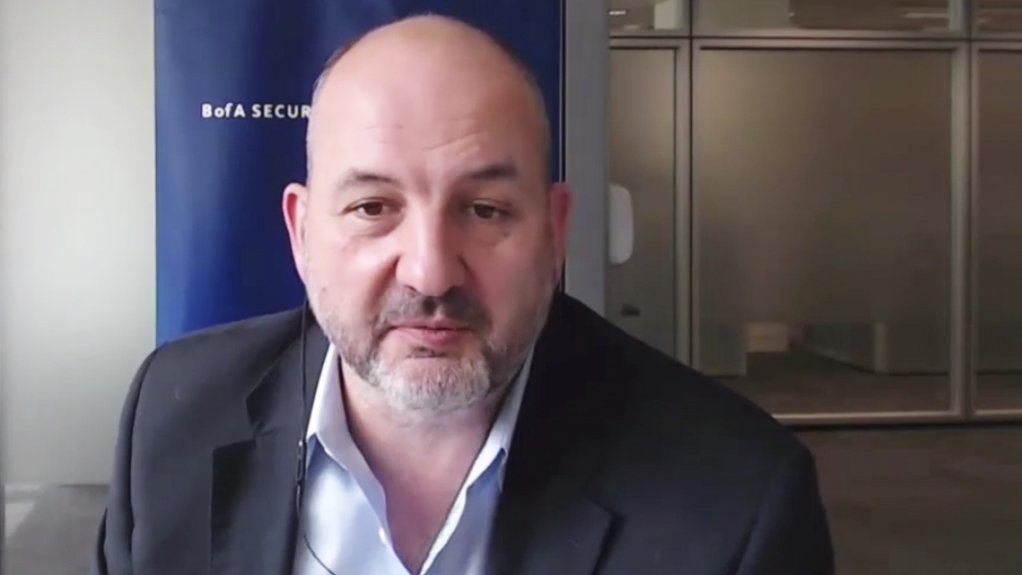 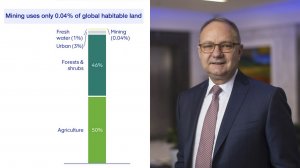 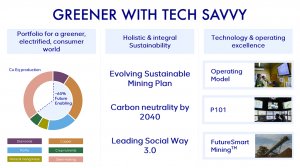 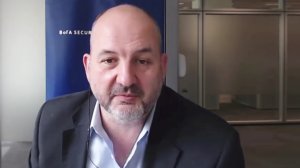 JOHANNESBURG (mingweekly.com) – Recent generations have defined the environment as a critical issue for humanity and climate change represents a new and sharper focus that exceeds any single global issue that we have seen in centuries, Anglo American CEO Mark Cutifani has told the Bank of America Securities Global Metals, Mining and Steel Conference.

Moreover, when viewed in the context of the Covid-19 pandemic, the fragility of the human species becomes an even more compelling case, Cutifani said in his presentation covered by Mining Weekly.

“For us as an industry, the transition to a decarbonised society ­– and what that means for both demand and supply for our products – becomes the defining issue of our time.

“At Anglo American, we will be part of the solution, we will provide commodities necessary for that transition. We’ll fulfil our obligations in a responsible way while ensuring that we make a real difference within the local communities that we partner,” Cutifani said.

While mining’s physical footprint was a small 0.04% of global habitable land, compared with the 50% agricultural footprint across the globe, mining’s commodities were absolutely key in decarbonising energy and improving the environmental footprint right across the globe – “and that includes increasing biodiverse areas,” he added.

“For us sustainability in every sense of the word provides us with a platform to improve our long-term value proposition.

“We’ve got a broad portfolio of assets and new opportunities that we’ve developed and we're thinking for the short-, medium- and the longer term.

“Within the context of our purpose to reimagine mining to improve people’s lives, we believe the delivery of sustainable returns to shareholders, employees and societal stakeholders is an imperative that will define the long-term success of our business.

“In defining what we need to deliver, we’ve been crystal clear. In talking to shareholders, we target a better-than-ten percent pre-cash flow yield on capital employed through the price cycle as the prime measure of our effectiveness as business managers.

“We believe that in the last 12 months, we’ve again overtaken our major competitors in terms of our aggregate cost position across all of our commodity positions so that our margins are continuing to grow and today we are the most competitive of the major miners across the sector.

“This is what we think about when we come to work every day and our purpose and ambition drives our strategy and its execution. Our portfolio is now focused on quality assets with a continual tilt towards future enabling commodities,” Cutifani said.

“We think the mining industry – and we as a company – are perched on the edge of quite a material opportunity.

“In the shorter term the world has stimulus packages estimated at between $10-trillion to $20-trillion over the next ten years, many of which are focused on metals-intensive infrastructure.

“We also face growing population over the medium to longer term that will need food, energy and shelter. The middle classes will grow and associated wealth effect will reach an even larger and more diverse population pool,” he added.

Sixty five per cent of Anglo’s portfolio by value and over 90% of its growth capital is on future-enabling products. The other 35% is its high-value-in-use iron-ore and metallurgical coal assets. (Also see attached graphic.)

“Our integration with our ESG strategy is unique in the industry and its evolution has taken us past our competitors and certainly set the most aggressive carbon-neutralisation targets in the industry.

“Our sustainable mining plan is a first in the industry by being carbon neutral by 2040 and, by the way, we’ll be the first with major truck that’s powered by hydrogen that we’ll have on site in the third quarter of this year in South Africa,” Cutifani reiterated.

Fairclough: On coal you’ve announced the spinoff of your South African thermal coal assets, you’re investigating an exit from Colombian thermal coal, how do think about metallurgical coal from here and will investors forgive you for building a new metcoal coal mine?

Cutifani: As you know, the Thungela resources demerger is going well and will be done in June. I’d expect that Cerrejon will be done in the next 18 months, if not sooner. In my view, the conversations between the three partners is moving up pretty rapidly so I think it’ll get done. Regarding metcoal, I think you’ve got to think very differently.  Think we’ve got to be careful that we don't end up being simplistic in responding to trends. The one thing about thermal coal is that, as an energy source, oil and gas are always going to be competitors to keep that fossil fuel space open for themselves. In my view it was always going to be tougher for thermal coal and it wasn’t a big part of our business. So that was an easy call. Regarding metcoal, we’ve got high quality and the world needs metcoal to produce steel, which the world needs to decarbonise our economy. So, anybody who talks about getting rid of metcoal in the next ten to 15 years is really, I guess, on a different planet. We need metcoal to produce the steel to decarbonise the planet and over the next 15 to 20 years, it will progressively be taken out of the supply chain. So, our resources will last to about 2035-2040. We won’t go building or growing the business beyond that period. We’ve got so many other options because of the products we produce. We’ll tend to focus in those other areas for new capital. We don't have a new metcoal mine on the drawing board. We’ve got some areas that we’ll continue to invest in to sustain the business, but I wouldn’t think we’d be a significant metcoal producer beyond 2035-40.

The company delivered nearly 4.2-million tonnes in the December quarter, down from 6.3-million tonnes during the previous period in 2019. It expects its output to rise in 2021, targeting a production of around 24-million tonnes this year.

Fairclough: Let’s talk a bit about platinum group metals (PGMs). We have the internal combustion engines fading over time, versus the emergent hydrogen economy, which should pick up the torch. How does Anglo think about this issue?

Cutifani: When we think about the future, we still will have internal combustion, you will have battery vehicles, particularly the small run-around city type applications, particularly what we’re seeing in China, and you’ll see the larger-scale hybrid hydrogen driven fuel cell type vehicles that we see in commercial applications, SUVs, those types of vehicles. At the moment, we think that from a PGMs consumption point of view, in the next 15 years, we could double the consumption of PGMs in a range of sectors. The other big trend that we think is occurring is the development of the material sciences with digital technology, which you can liken to horsepower being applied to the periodic table. We think a big beneficiary in that are PGMs. For example, the use of palladium in batteries supporting a 30% increase in charge intensity and cycles, because of the more robust construction of cathodes and particularly the connection points. We think that research is critical. That’s why we floated off, with a number of other investors, our platinum venture capital fund and certainly the sorts of things we’re identifying are very encouraging and showing very significant potential for PGMs in a whole broad range of applications. So, we’re very excited.

Fairclough: Your shares are cheap. Your balance sheet should be quite quickly net cash. Are there limits on how and when you might implement a buy-back?

Cutifani: The most important conversation for the board at the half-year will be about more returns to shareholders. I would think in the first instance we would likely go the route of a special dividend. We won’t change the 40% on the basis that we won’t change the discipline. We’re not going to go out and blow the money. The nice thing is that we’re obviously in a strong position and it’s getting stronger by the day and obviously when we get to the half-year, I think we’ll have some constructive conversations with shareholders.