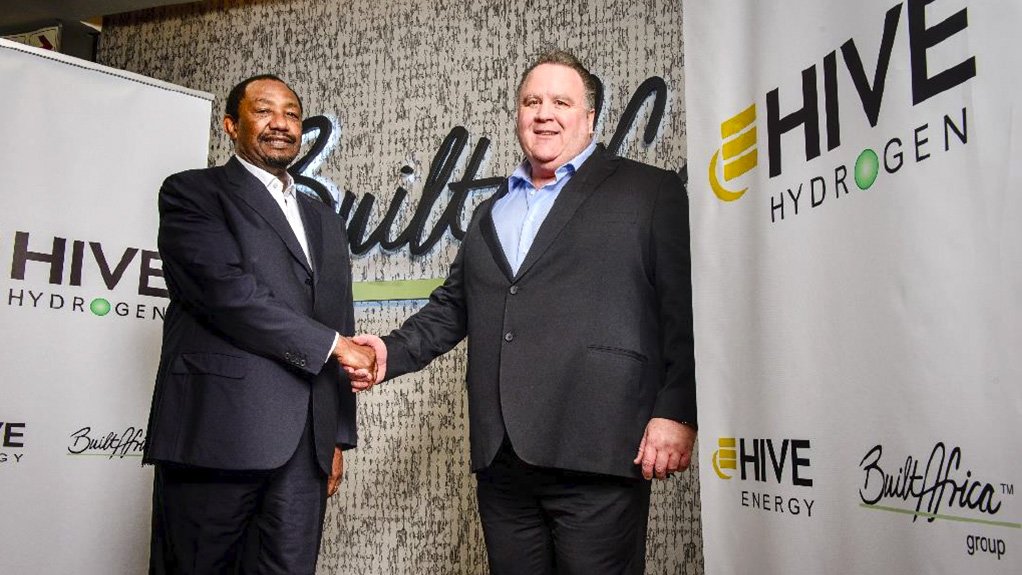 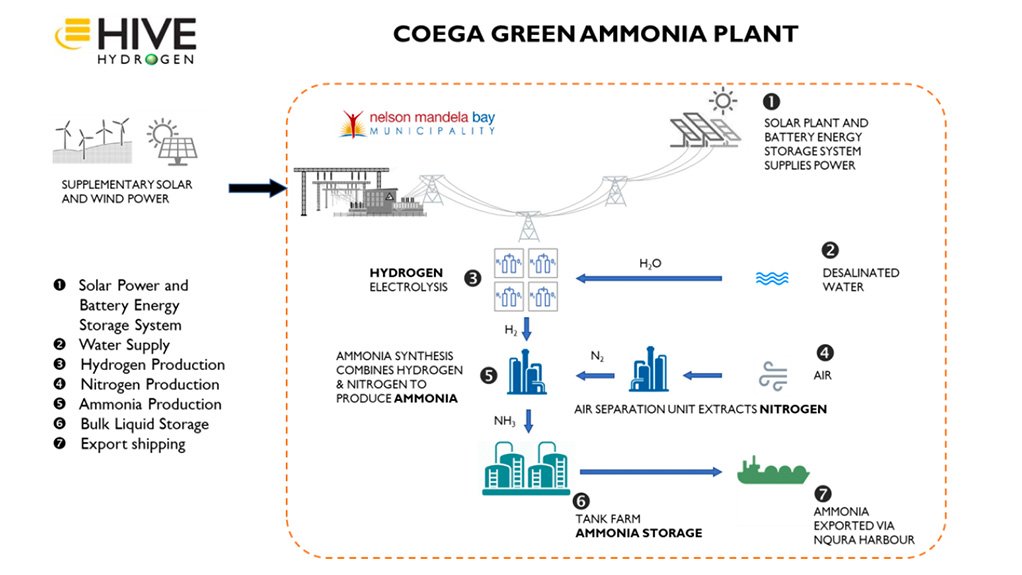 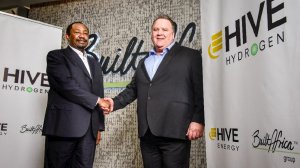 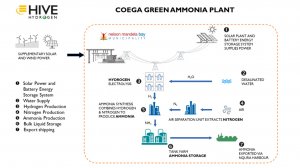 JOHANNESBURG (miningweekly.com) – Hive Hydrogen and Built Africa – together as Hive Hydrogen – as well as Linde plc, through its wholly owned South African subsidiary Afrox, have teamed up to establish an exciting green ammonia export plant in Nelson Mandela Bay, in the Eastern Cape.

The proposed 780 000 t/y, $4.6-billion green ammonia plant – with its own dedicated green power supply at the Coega special economic zone (SEZ) alongside the Port of Ngqura – is a significant South African response to the world’s need for green solutions to limit the devastating impact of climate change and to deliver on COP26 commitments.

The renewable energy and energy storage component alone will be substantial.

The announcement of the project coincided with a separate visit to the Coega SEZ of representatives from the trade and economics section of the delegation of the European Union to South Africa and the European Investment Bank to explore opportunities for further trade and investment collaboration, including investment in green hydrogen.

There is a huge surge in demand for ammonia globally to meet current agricultural, chemical, and mining requirements and this, together with the future switch to green ammonia as the main fuel in the maritime industry and for coal substitution, makes this the perfect time to invest in this commodity, Afrox and Hive Hydrogen stated in a media release.

“This certainly heralds a new era for the country in its commitments to greener solutions for industry. The pure scale of the project and the clean technology being used is truly remarkable,” Gcabashe enthused.

Hive Energy UK, which has been working on renewable energy powered green hydrogen and green ammonia projects since 2019, is very pleased to have reached the critical milestone of completing the prefeasibility study for the project, together with Built Africa and Afrox.

“We can now confidently announce our collective aspiration to move forward to final investment decision and commencing the development of this world leading project at the Coega special economic zone,” said Hive Energy CEO Giles Redpath.

Afrox CEO Schalk Venter drew attention to Southern Africa being one of the few regions around the world with “very favourable conditions for green hydrogen and ammonia production and export”.

Nelson Mandela Bay Mayor Eugene Johnson hailed the project as being a breakthrough for South Africa and Nelson Mandela Bay in the global drive for sustainable green industry and expressed the city’s pride to be leading the way and working closely with Hive Hydrogen and Afrox to establish the ammonia plant and its green power requirements.

“The investment in job creation, training, new and clean industry, and the significant community benefits that this brings will be a great boost to the transformation programme we are planning for the region,” Johnson added.

Hive Hydrogen is being supported by InvestSA, a branch of the South African Department of Trade, Industry and Competition, with specific investment facilitation through the InvestSA one stop shop mechanism.

InvestSA head Yunus Hoosen emphasised the recognition of the Department of Trade, Industry and Competition of the importance of the green hydrogen sector in contributing to increased investment and industrial development opportunities.

The department’s work in this regard, Hoosen said, was coordinated through the High Level Panel on Hydrogen, established by Trade, Industry and Competition Minister Ebrahim Patel.

Hive Hydrogen described the 9 003 ha Coega SEZ as being a foreign direct investment destination of choice and a leading SEZ on the continent.

In line with its strategy, the Coega SEZ is building a platform for sustainable investments in South Africa. Its focus on sustainability strengthens the value proposition for investors of the future.

All sustainable investments benefit from the Coega SEZ’s modern infrastructure, government incentives, certified systems and processes, one-stop-shop systems supported by InvestSA, and proximity to two seaports, including the deep-water Port of Ngqura.

As reported by Creamer Media last month, the government of Namibia has announced the selection of HYPHEN Hydrogen Energy as the preferred bidder for a $9.4-billion green hydrogen project to be developed in the Tsau//Khaeb National Park, near the coastal town of Luderitz, in southern Namibia.

HYPHEN is a joint venture between Nicholas Holdings Limited, a strategic investment and infrastructure project developer, and ENERTRAG South Africa, a unit of an independent German energy company that has a portfolio of renewable energy projects and which has also been producing green hydrogen since 2011.

The bid involves the building of a vertically integrated project able to produce 300 000 t/y of green hydrogen and green ammonia for export into regional and global markets from 2026 onwards.

Once the feasibility study is concluded and the project reaches financial close, HYPHEN will have the right to construct and operate the project for a 40-year period.

The project will use desalinated water, part of which will be supplied to communities in nearby Luderitz.

Using renewable energy, sea water is desalinated, and hydrogen is extracted from it through an electrolysis process. Nitrogen is simultaneously extracted from the air utilising an air separation unit. The hydrogen and nitrogen are then combined through ammonia synthesis and green ammonia is produced. The ammonia is cooled, liquified and stored for export.

When ships arrive in the port, the liquid ammonia is dispatched directly through a pipeline from the storage tanks and loaded on to the ships.

Interestingly, the ships themselves are on their way to being powered by green hydrogen – again with a possible South African link in that AP Ventures, an Anglo American-linked investor in breakthrough green hydrogen technologies, is helping to fund the development of green ammonia-powered ships and other transport applications. Maritime decarbonisation is one of the biggest environmental challenges in the battle against climate change.

The global climate change imperative limiting global warming to an increase of no more than +1.5ºC by 2050, has been driven overwhelmingly by the switch to renewable energy which provides the cleanest and lowest cost power source.

As fossil fuel and carbon-heavy power generation is phased out, hydrogen – which is produced from sea or fresh water using electrolysis powered by renewable energy – has been widely recognised as the ‘go-to green fuel’ and the most important global economy driver of the future.

The International Renewable Energy Agency or Irena believes the production of hydrogen from renewables has the potential to deliver 19 exajoules (EJ) of energy in 2050.

Some 16 TW of solar and wind power generation capacity – 120 EJ – may be needed to generate green hydrogen or related products from electrolysis by that point – compared with total renewables production of just over 1 TW currently.

The production of a very large volume of hydrogen from renewable power, in combination with hydrogen storage, will help provide long term seasonal flexibility and bring stability and certainty to the global fuel supply system.

Brown ammonia production currently accounts for almost 1.5% of the world’s carbon emissions, while manufacturing hydrogen from water through electrolysis, and combining it with nitrogen from air produces sought-after green ammonia. This process underpins Hive Hydrogen’s project, which will deliver a sustainable green ammonia supply.

Cerebos MD John Drinkwater recalled that when Hive first approached Cerebos two years ago, he was amazed at the vision of the project and how the company envisaged working with Cerebos to provide the project with desalinated, demineralised water while keeping the production chain powered by green energy.

“Sustainability and the success of our beautiful country is a key focus for Cerebos, and it is an absolute privilege to be involved in a project such as this. We are delighted to have them as our neighbour and to form part of the team to bring this magnificent project to fruition,” Drinkwater said.

Peter Lake, owner of Tankatara Farm where the on-site solar plant will be located, said: “We have been farming here for four generations and have seen first-hand, the negative effects of climate change on the viability of our farming operation. We are impressed with the way Hive has been going about striking a balance between land utilisation, protecting the environment, and bringing renewable power supplies and green industry to life.”

“The European Union is impressed by the operations and opportunities for investors at Coega SEZ," European Union delegation to South Africa trade and economics head Roberto Cecutti stated in a media release to Creamer Media.

He described the visit as being primarily focused on understanding the SEZ's operations and opportunities and noted the proximity to the port and impressive infrastructure within the zone.

"We look forward to exploring further areas of collaboration with Coega Development Corporation in the future, specifically around green hydrogen,” Cecutti added.

The delegation was taken through Coega SEZ operations and its activities in the emerging sector of green hydrogen, followed by a tour of the SEZ, including the Nelson Mandela Bay logistics park.

In 2019, the SEZ won the Investor of the Year accolade, awarded by South Africa's Department of Trade, Industry and Competition.