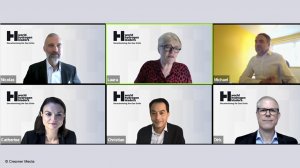 German, French, British, Norwegian and Swiss energy representatives taking part in the virtual World Hydrogen Leaders discussion on the regulatory landscape for hydrogen in gas grids emphasised the need for speed and flexibility – slightly ahead of two more Australian companies announcing that the use of green hydrogen is being prioritised in the research and development of decarbonised steelmaking. (Also watch attached Creamer Media video.)

What was also reiterated during the World Hydrogen Leaders discussion was that many of the regulatory components required are already in place – but with dots needing to be joined.

Germany’s Ontras Gastransport, which is already heavily engaged in various hydrogen projects, cited as one of its main objectives the task of connecting Eastern Germany “as quickly as possible” to the pan-European hydrogen backbone that is evolving.

“It’s clear that hydrogen has a crucial role in the transformation of the European energy system in turning Europe into a climate-neutral economy,” Ontras Gastransport regulatory affairs and energy policy head Dirk Manske told the virtual event in which Mining Weekly participated.

For that to happen, a cost-effective, reliable, sustainable and fast development of the European hydrogen network is needed.

Banet spoke of the abundance of hydrogen opportunities but also of their different scales. “We have the big industrial projects with companies at the front line and there have been wonderful projects. But we also have the small local energy systems that deliver a lot of local benefits from hydrogen development,” she said, in drawing attention to the Orkney Islands wanting to develop their own energy security and to sell hydrogen to other countries.

Pho Duc said his company’s concentration in the development of hydrogen projects was focused on the seven countries of Europe, with several examples in Portugal. He spoke of hydrogen presenting a great opportunity that needed to be developed “very fast”.

Wagner, in the knowledge that hydrogen is going to be needed to decarbonise heavy industry, power and heavy transport, spoke of the UK government targeting a couple of industrial clusters by mid-2020s and a further two by 2030, along with 5 GW of low-carbon hydrogen production.

“Initially, the clusters may not really require much in the way of economic regulation but as they develop, we may need a regulatory structure,” said Wagner.

After making reference to hydrogen being poised to become an energy pillar, Peugniez emphasised the need for scaled-up plans to ensure that short-term decisions did not inhibit the longer-term outlook.

“That’s really the issue. We need forward-looking planning, taking in what is envisaged in the future,” said Peugniez.

“We understand that hydrogen will provide some flexibility and stability to the whole energy system, including electricity, so the issue of security of supply is also something to take into account.

“With hydrogen, we don’t have to restart a 20-year learning curve. We have a process and a market that is working,” he pointed out.

Envisaged was that existing gas networks would be repurposed without excessive change being necessary.

Just reported from Australia is that major mining company Rio Tinto will be working with BlueScope to explore low-carbon steelmaking pathways from iron-ores from the country's Pilbara region. This will involve the exit of coking coal at BlueScope's Port Kembla Steelworks and a prioritisation of the use of green hydrogen in its place.

Targeted will be the direct reduction of Australia's Pilbara iron-ores into product that could then be processed in an electric melter into metallic iron suitable to be finished into steel.

"We're putting our dollars and our people right on the front line of addressing climate change," BlueScope CE Mark Vasella was quoted by Business Wire as saying.

RioTinto iron-ore CE Simon Trott drew attention to the partnership benefiting from the experience of BlueScope at its steelworks in New Zealand, Rio Tinto's experience in the Atlantic direct reduction market and the research and development of both companies in iron-ore processing.

This follows Australia’s Fortescue leading the way in the envisaged production of green steel from hydrogen, electrolysed with the use of renewable energy. Fortescue has developed a hydrogen fuel cell haul truck and has also been putting hydrogen-carrying green ammonia into a ship’s engine and green ammonia into its train engines – and seeing them run successfully.

Hydrogen fuel cells, which are catalysed by platinum group metals (PGMs), are electrochemical devices that convert the energy of a chemical reaction directly into electricity, with heat and water as by-products. Platinum and ruthenium PGMs, which are hosted overwhelmingly in South Africa, play large fuel cell roles. Unlike batteries, fuel cells never "run out", the International Platinum Group Metals Association points out on its website. Platinum and iridium PGMs are also key catalysts in electrolysers that generate green hydrogen from green energy sources.