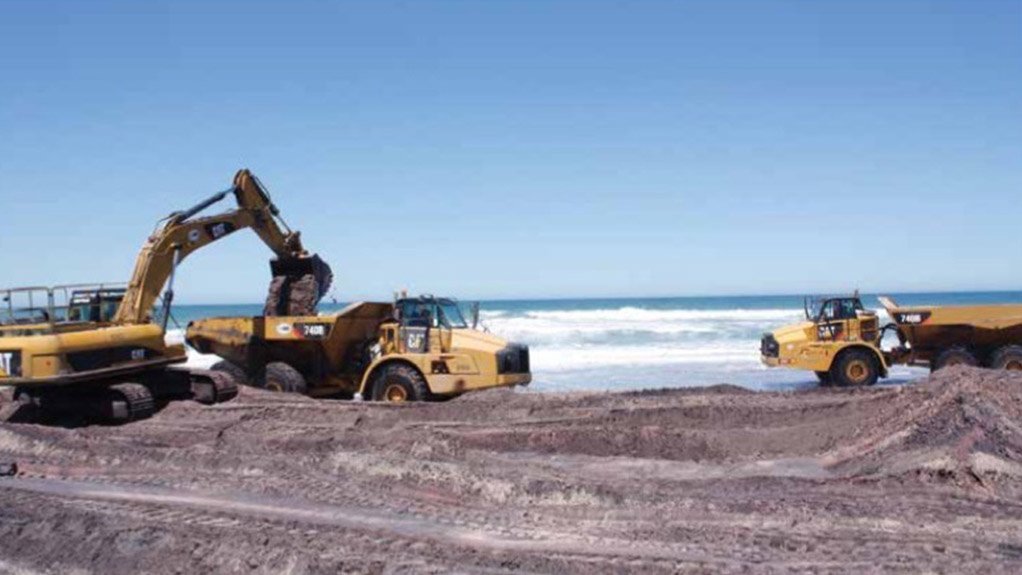 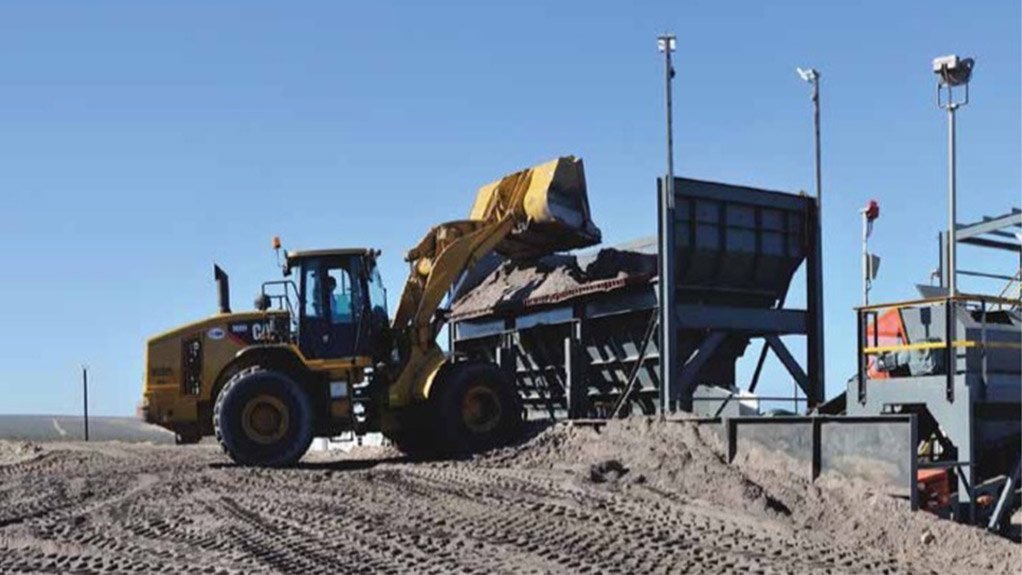 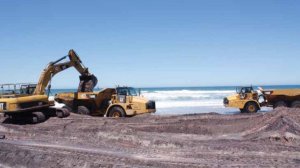 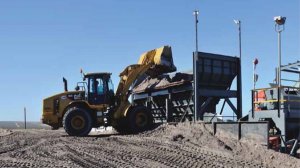 The WC 30/5/1/2/2/10199 PR, awarded to MSR by the Department of Mineral Resources (DMR) in November, is directly across the company’s Tormin mine, 40 km west of Lutzville, in the Western Cape, and extends up to 10 km offshore from the mine’s current mining area.

“The programme is designed to confirm what we already know, which is that there is substantial deposition of heavy mineral sands in the surf zone and beyond, although we will not drill beyond the wave formation zone. The results will effectively [lead to] a Joint Ore Reserves Committee-compliant inferred resource,” he says. Quantifying the offshore resource is expected to enable MSR to scale production according to market demand.

Caruso says, to plan the underwater exploration drill sampling programme, the company completed a bathymetric and subbottom sea-floor profiling geophysical survey. The process started with a field survey in October, which was completed over a two-week period, as it depended on the weather.

Hydrographic and geophysical survey work followed, which was conducted by consulting firm WSP | Parsons Brinckerhoff, the Council for Scientific and Industrial Research and the Council for Geoscience. Caruso notes that the background information relating to wave and wind conditions, as well as historical bathymetry data, was compiled over a three-month period and included data provided by mineral sands producer and marketer Tronox’s Namakwa Sands operation and the South African Navy.

The bathymetric survey over the surf zone – as well as the area between the low-tide mark and the wave-crest formation zone – in conjunction with a previous aeromagnetic and radiometric survey, showed a 4 m- to 9-m- thick sediment deposit.

Caruso points out that drilling has yet to start, but MSR has identified suitably experienced South African organisations to conduct the initial surf-zone drilling sampling campaign. “The programme will be finalised before the third quarter, though it should be noted that the programme is subject to the weather and ocean conditions.”

The programme entails sample collection every 10 m to 50 m on 500 m spaced fence lines along a 12 km stretch of coastline.

Pending Mining Applications MSR submitted a prospecting and bulk sampling application on June 4, 2015, for an area north of Tormin’s operations. Caruso notes that the results from the environmental- impact assessment (EIA) and public participa- tion procedures were completed and submitted to the DMR in January, with MSR hopeful that the prospecting permit will be granted by June.

He says the area “exhibits the same depositional and geological characteristics as those at Tormin; the exploration area has been extensively mined and disturbed over the past 30 years by diamond miners and, as such, is attractive from a low environmental-impact perspective”.

As Tormin has steadily increased its production output since starting operations in 2014, any deposit that has similar characteristics should prove viable. Tormin has produced more than 500 000 t of garnet, about 87 000 t of zircon and rutile and about 210 000 t of ilme- nite during this period.

Additionally, MRC’s subsidiary, minerals sands miner Transworld Energy Minerals (TEM), submitted the mining right application (MRA) for its Xolobeni project on March 4 , last year. Caruso adds that MSR submitted a scoping report within 44 days of the MRA, which has since been accepted by the DMR.

He adds that TEM will complete an EIA, which will include specialist reports, as well as an environmental management programme (EMP) and public participation. “At this stage, the submission of the EIA is due . . . around April. Under normal circumstances, the DMR has 107 days from the date of submission to grant or reject the EIA/EMP.”

Construction of the Xolobeni mine should be completed three years after the permit is awarded, which, if awarded this year, will be by 2019/20.

The project is expected to generate R3.3-billion a year over a 25-year mine life. During construction, TEM estimates that about 1 800 direct jobs will be created, comprising about 600 people from the local community and about 750 people from KwaZulu-Natal. During its operation, Xolobeni is expected to create 400 permanent jobs.

“Of course, there will be a multiplier effect, with indirect employment generated by the engagement of service industries needed to support the mine during its operation,” states Caruso.

The Xolobeni social labour plan also commits MSR to the provision of significant funding for the development of infrastructure, schools and education through bursaries and apprenticeships.