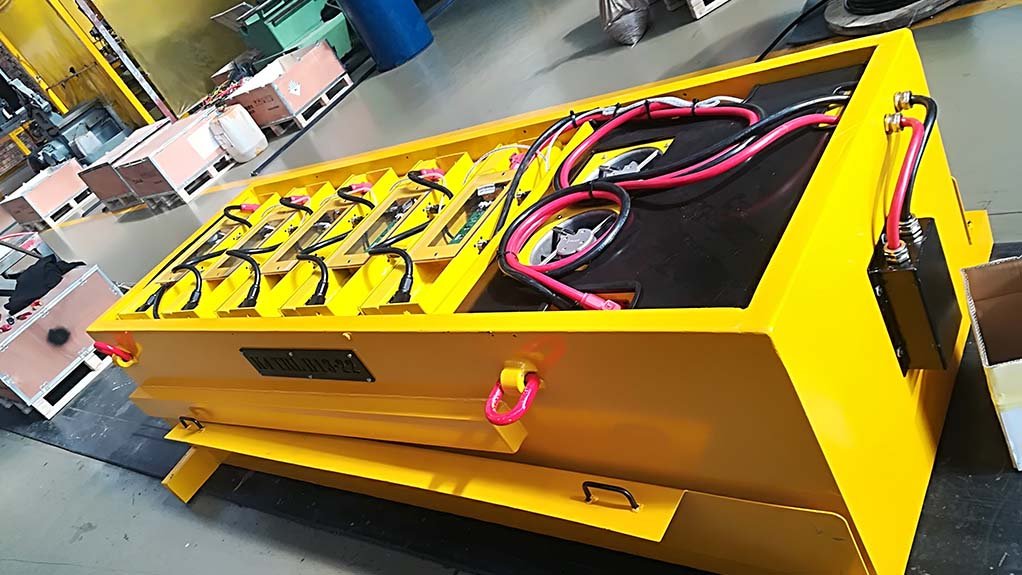 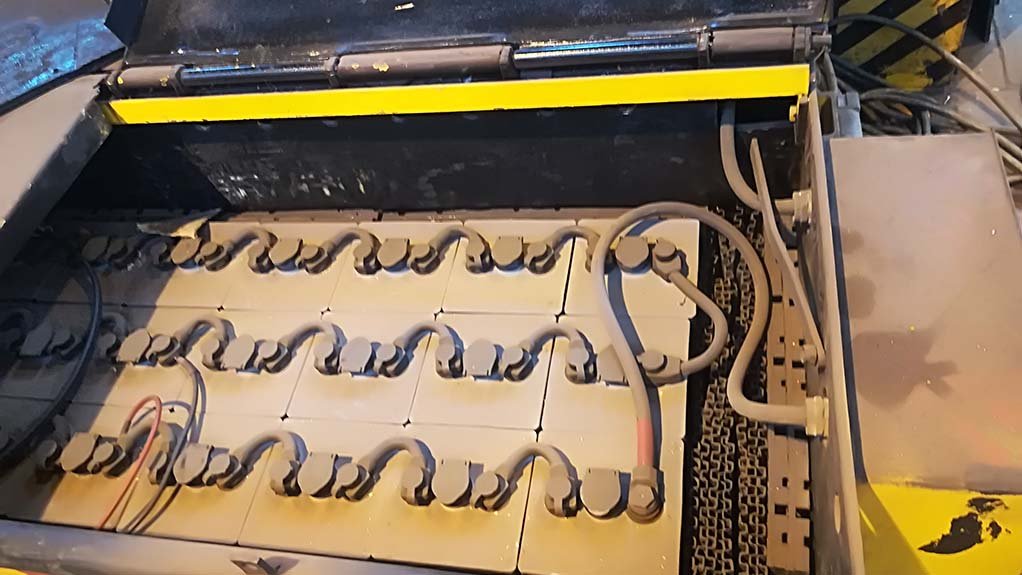 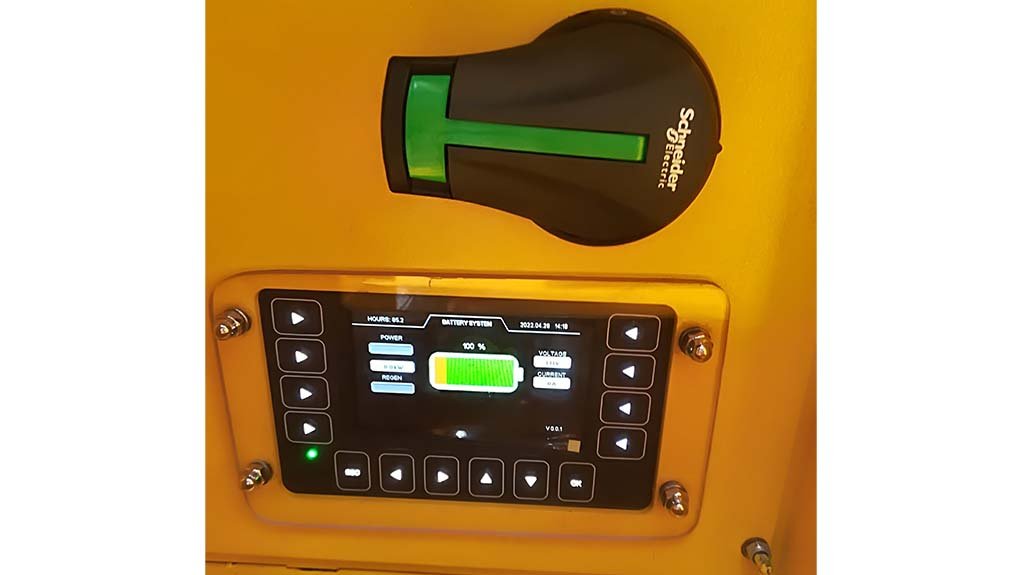 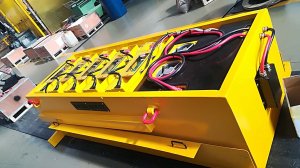 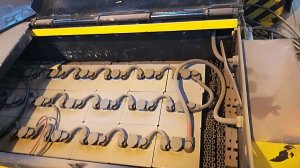 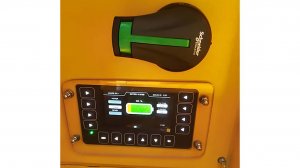 During a visit to the company’s site in Germiston, Gauteng, where the locomotives and battery packs are assembled, Trident global marketing manager Simon Lewis told Mining Weekly that this was a switch from the conventional lead acid batteries used in locomotives.

He noted that, with the global push towards sustainability, as well as the company looking to capitalise on the benefits provided by lithium technology, the technical team identified the possibilities and advantages of using of using lithium batteries as an alternative to traditional lead acid batteries.

Trident designs locomotives for underground hard rock mining operations. Of the mining and tunnelling locomotives that it manufacturers, about 90% are battery-powered units, with the remainder trolley line or “combination” (battery and trolley – the battery is deployed in mining areas where no trolley line exists) locomotives.

Lewis explained that, typically, when buying a battery locomotive, the customer would buy two lead acid battery packs – one for use on the locomotive on its current shift, and the other on standby being charged at a unit for the next shift.

The latter would likely be on charge for the entire duration, or the majority of the current shift, given that it takes eight hours to fully charge a lead acid battery.

By comparison, only one battery pack is required per locomotive for lithium batteries, instead of the usual two lead acid batteries.

By comparison, no charging bay is required with the new lithium battery, as Trident has integrated the charger into the battery pack. Therefore, the lithium battery can merely be plugged in the nearest available or convenient power source for charging.

Lewis explained that, while other manufacturers offer lithium batteries, Trident is a pioneer in this integrated model, with the charger combined with the battery pack.

Owing to the integrated charger on the locomotive and the speed of lithium charging, recharging of the locomotive can be undertaken during the shift change, as this takes two hours, compared with the eight hours required by lead acid batteries, he pointed out.

Moreover, as these batteries do not need to be charged in the same manner as lead acid batteries, this leads to time savings in having to change batterie, while less handling of the batteries, that is, removing and replacing them, also results in a lower risk of injuries.

This also leads to efficiency improvements, as locomotive operators do not have to wait for the batteries to charge for such a long period of time, and for these to be changed after each shift.

Lewis outlined another advantage of this technology as the physical size of the lithium pack being narrower. This means that it takes up less space on the locomotive, and therefore, daily maintenance and inspections of the locomotive braking system and other subsystems can be done via access doors on each side of the pack, without removing the pack, as had to be done for lead acid units. This is estimated to reduce handling by 85%.

Lewis also indicated that lead acid batteries release toxic gases and fumes as they operate in the underground environment.

Therefore, by comparison, the lithium battery is more environment-friendly, and also provides cost benefits as a filtering system does not have to be installed underground to account for this.

Moreover, Lewis said that while lithium is not 100% recyclable, considerably less components of it end up in a landfill compared with lead acid batteries.

In addition, when the lithium battery comes to end of life for the locomotive, it could still have enough capacity to be reused for houses or offices, and the company is exploring the possibility of how this can be offered to mining communities.

These batteries also boast smart technology, Lewis mentioned, which allows these to be maintenance free.

This entails a battery management system, which monitors the array of modules, detecting faults and failures and instituting on-board routines to ensure the batteries are protected and performing optimally. This ability to monitor the battery and stop it ensures safety on the mining operation.

Connected to underground WiFi, information from the battery is also collected and operators, or requisite personnel, above ground are able to view this.

Trident started a lithium division just last year as it began exploring the different opportunities provided by this, and Lewis acclaimed that it was already contributing about the third largest turnover for the company.

Trident SA design engineer Lodewyk le Grange pointed out that developing and offering this new technology had led to the creation of new jobs, and notably, new skills development required to design and produce these.

He said the biggest challenge in undertaking this new technology had been supply chain challenges, which resulted in some difficulty in getting the required components, with this also being the case with sourcing the lithium from China.

Development of this new technology began at the start of 2021, and the company already has 28 batteries out in the field in South Africa, including at operations owned by Sibanye-Stillwater and Harmony Gold, Le Grange noted.

He said the market response thus far has been positive, with customers pleased with the increased efficiency.

Le Grange added that locomotive operators have said the battery was more powerful.

He explained that this was not actually the case, but rather a perception, as when a lead acid battery gets flat, the voltage drops significantly, whereas the lithium has a very flat voltage discharge.

Moreover, he said operators of locomotives with these batteries are finding that they are able to complete their work earlier than other drivers, as they do not have to wait to charge the batteries. This engenders a production increase of about 25%, he said, which leads to a considerable gain in efficiency for the mining operation as a whole.

Further to South Africa, Trident is also considering expanding the footprint of this new technology to other countries, with the company currently supplying 26 different countries with its other products.

Lewis highlighted South America as a region of particular interest to the company, owing to the characteristics of their mining operations.

Mines in that region are often in remote and difficult to reach locations. This new technology can be charged and transported to site, which leads to reduced costs of running overhead lines to operations.

The company has been showcasing the new technology at trade shows in Lima, Peru, Lewis said, noting that the feedback had been positive, with keen interest shown.