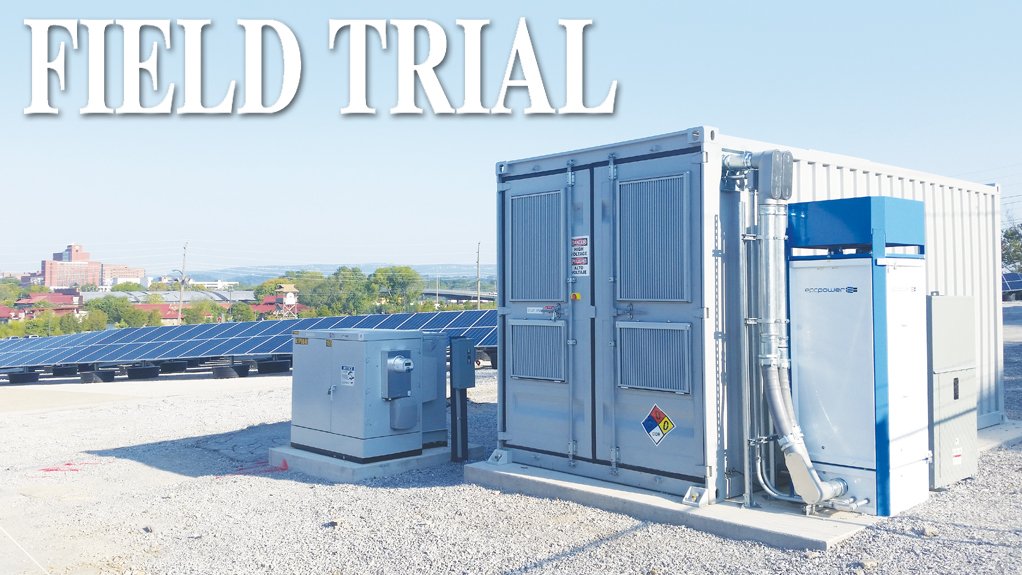 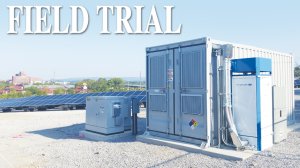 Nikomarov notes that the commissioning is the result of persistent development work that started in 2014, adding that the trial’s success will go a long way towards advancing the company’s goal to establish a vanadium value chain in South Africa.

Eskom’s testing and development centre in Rosherville will test the VRFB and its performance and applications to demonstrate the abilities and maturity of the VRFB technology for broad commercial use in South Africa and on the African continent.

The trial follows the completion of market studies by Bushveld Energy and the Industrial Development Corporation’s (IDC’s) assessment of African VRFB demand, as well as global vanadium electrolyte demand and requirements.

“Eskom identified energy storage requirements almost a decade ago and established the Rosherville facility to investigate storage solutions. Following our visit to the facility in 2015, we considered the possibility of a trial as a means of demonstrating the technical and financial value of VRFB,” explains Nikomarov.

The VRFB will have a peak power of 120 kW and 450 kWh peak energy storage and is being manufactured by Bushveld Energy’s US-based technology partner, UniEnergy Technologies (UET). The trial will take 18 months, after which the system will be redeployed locally to a commercial site.

Co-developers Bushveld Energy and the IDC will jointly facilitate access to the battery for independent power producers, energy storage developers and policymakers for wider familiarisation of VRFBs.

BEYOND MINING
“Bushveld Minerals CEO Fortune Mojapelo and I started discussing the concept of vanadium energy storage back in 2014,” notes Nikomarov. “I compiled a business plan and pitched the concept to the Bushveld Minerals board, which was, at the time, a company primarily focused on mining.”

Bushveld Energy was formed in 2015, securing partnerships with UET and the IDC by April and June 2016 respectively.

“Our first interaction with the IDC was at a 2015 conference sponsored by the Department of Science and Technology . . . it ultimately took us about a year to get the IDC to commit to a formal contract,” explains Nikomarov, further noting that the company’s and the IDC’s having an “overlap in visions” was an advantage.

IDC New Industries strategic business unit head Christo Fourie agrees, explaining that, following the organisation’s 2015 decision to prioritise energy storage, the corporation looked for viable partners – “specifically partners that could create value through the beneficiation of locally available minerals such as vanadium, manganese and nickel” – which could assist in developing a local industry.

Nikomarov says that one of the most important aspects of working with State enterprises such as the IDC and Eskom is finding people who believe in the proposal, as State entities have numerous and complex bureaucratic processes and regulations, which can be challenging to navigate.

Therefore, having a representative who believes in the project, the concept or the technology is crucial in facilitating engagements between the company and the entity.

However, one of the major challenges in dealing with State entities is their constant flux. “With Eskom, for example, there are changes in decision-makers, committee members or budget priorities. Often it means having to rely on the people that you’ve worked with to approach the new management, facilitate new engagements, or advance previous agreements.”

The requirements and outcomes set by State entities – and their inherent risk aversion – can appear excessive, Nikomarov adds. He notes this stringency is beneficial in that it ensures compliance and establishes a high performance standard, but that it can also be detrimental, slowing development at times.

TECHNOLOGY PARTNER
Nikomarov notes that finding the right technology partner was crucial. “There are a lot of vanadium battery manufacturers globally . . . several of which are in the research and development stage, with others having already created a product.”

He notes that it was important to determine whether there was cohesion between the companies’ management teams and to establish whether their technology was market-ready. “UET . . . had a commercial product, it had secured some financing (so we knew it was going to be around), and it had proprietary technology on electrolyte . . . but the big thing was that it was willing to look beyond the US market for opportunities.”

Bushveld Energy wanted a partner that could “parallelise” the adoption of vanadium technology in various countries, and UET’s range of investors (from China, the US and Japan), its globally diverse board and its outward looking approach would facilitate this parallelisation, Nikomarov says.

UET business development and marketing VP Russ Weed notes that this idea of parallelisation ties into UET’s broader market strategy, which has multiple tiers based on market development timing. The US company, established in 2012, has an immediate focus on Tier 1 – North America and its 3 000 private and public utilities, Western Europe and Australia – and Tier 2, which includes the South African and other markets.

“The partnership with Bushveld Energy is strategic because of the mining assets of its corporate group and the possibility of providing either localised feedstock or electrolyte in the future. Further, the growing demand for energy storage in South Africa and [on] the rest of the continent presents a significant growth opportunity,” says Weed.

He adds that Australia’s influence on the Australasian region presents several growth opportunities. “From there, we can look into opportunities in Singapore and use that country as a benchmark for the rest of South-East Asia.”

Meanwhile, UET eastern sales VP John DeBoever – born in the Democratic Republic of Congo – has a unique understanding of the continent’s challenges, and was integral to the development of the trial unit.

DeBoever explains that UET has been improving on the capabilities of its VRFB systems, which have been commercially produced since 2015, and that the unit to be commissioned at Eskom is a small-scale model of the “state-of-the-art, Ella Fitzgerald version”.

He notes that the trial unit is a comparatively small ac solution and is specifically designed to address Eskom’s energy-to-power ratio and size requirements. It is meant to assist the utility with peak-shaving, and supply stored energy to the grid from 6:30 to 9:00 and 18:30 to 21:00. “The unit is also capable of islanding – disconnecting from the grid, with the battery remaining in operation.”

UET has several global installations, including at an Italian utility. The company’s pipeline, in terms of developed systems, contracted systems and awarded projects, totals 150 MWh worldwide.

FUTURE PLANS
Fourie notes that, once bankability has been determined, “the first phase will entail the establishment of vanadium-based electrolyte production for the African and global markets”.

He says that options for the local manufacturing of complete VRFB solutions will be studied in parallel, and that the co-developers have prioritised the completion of the environmental-impact assessments for the electrolyte production site establishment.

Nikomarov adds that the co-developers have also concluded a locational study. “As a result, we’ve determined that we’re probably going to split the processes, and do a lot of prepurification at a plant such as Vametco and do the mixing at a different location.”

He says the second premises would probably be located in an industrial development zone to try to take advantage of the government incentives – moreover, “port proximity helps . . . for export purposes”.

Nikomarov notes that he would like to see recognition by government of the importance of energy storage, as it is necessary to catalyse the development of the industry.

“We need signals from government. We’ve got a signal from the IDC, but the IDC is not a policymaker . . . signals from the Department of Energy or the National Energy Regulator would open up our ability to do more.”

Nikomarov says that, owing to the technology being new, there is no real regulatory clarity in terms of national standards, targets in the Integrated Resource Plan and licensing, adding that, “the more certainty you can create, the faster the sector can grow”.

South Africa is going to need a certain amount of storage, whether it is in 2025, 2030 or 2040. “[However], if we want to manufacture storage solutions, we are going to have to be proactive. We can’t be entering the market in 2040, because then most of the technology will have been produced and imported.”

He stresses that, although localisation is important, and UET has agreed to assist with aspects of localisation, it is better to be part of a global value chain. “It is better – in terms of employment and socioeconomic impact – for a South African company to be 10% of a trillion-dollar industry than 100% of a R50-million industry.”