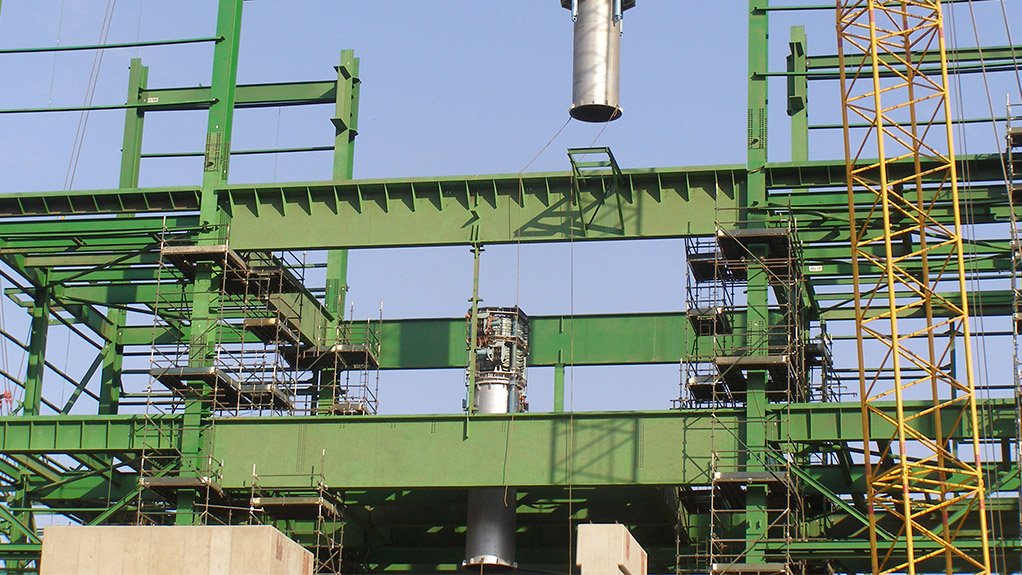 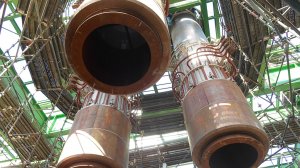 Each furnace has three electrode columns used to deliver current and to regulate furnace power during the smelting process.

Holl explains that the 6-m-long upper mantles of the columns are suspended from steel beams above the furnace, while the hydraulic systems allow for the columns to be raised or lowered. The upper section comprises the slipping devices, which allow for slipping of the electrodes, which are encased by 3-mm-thick steel casings. Slipping of electrodes is required, as the electrodes and casings get consumed in the furnace.

The electrodes are “slipped” 20 mm every hour, which refers to lowering of the electrode and casings. A new 1.5-m-long casing is added to the upper mantle every seven to eight hours to meet the rate of consumption and to ensure that furnace operations are maintained.

Holl notes that the lower part of the electrodes was the first piece of mechanical equipment installed inside the furnace building.

He explains that the electrode columns were lifted by privately owned construction company Tubular Holdings using a 220 t capacity crane. The lower columns were initially lifted into the furnace shell before the supporting floor of the building was complete, after which the upper section of the electrode column comprising the slipping devices, which weigh about 10 t each, was lifted and secured to the supporting beams. Finally, the bottom electrode was lifted towards the slipping device and both parts were connected.

The lower electrode columns are joined to low-voltage bus tubes, which are, in turn, connected to power transformers.

Each lower electrode column comprises a water-cooled copper system to ensure that the lower columns resist the harsh conditions in the furnace. Holl notes that the air underneath the furnace hood reaches 400 °C during normal operating conditions. “The furnaces are continuously operating at maximum design capacity. “It is, therefore, important to design and build core equipment to withstand the harsh conditions of the furnace, which can reach up to 1 800 °C.”

Holl points out that Metix had an installation team of 12 working alongside other contractors, making the integration of work between the various contractors challenging during the commissioning phase of the project.

He says that, while project owners usually contract another company for the engineering, procurement and construction management work, Glencore Merafe managed the project itself. “The challenge for them was ensuring that all the interfaces between the various contractors ran smoothly,” says Holl.

To help meet Glencore Merafe’s project integration goals, Metix assembled the electrode columns outside the building, which enabled the other contractors to continue with the construction of the building without any interruptions. Once the building had reached an adequate level of construction, the columns were lifted into the building.

“Usually, when a contractor moves into an area, it needs to be cordoned off for that contractor to work. “The electrode column installation is a complicated process involving the installation of several components and takes a long time.

“By assembling the columns outside the building, we allowed for other contractors to continue working in the core of the building. Therefore, although the installation of the electrodes is a major activity, it did not hamper the progress of the work being done inside the building,” Holl asserts.

He explains that, if Metix had adhered to the traditional method, which would have required the company to install the electrode columns while construction was still under way, it would have taken a full day to install a single column and, therefore, six days to complete the installation for both furnaces.

By assembling the electrodes outside the building and lifting it into the building, Metix was able to install three columns in a day-and-a-half.

About Metix Metix is a furnace supplier to the ferrous alloys market and has been supplying plants and equipment to this market for 12 years having installed its equipment in most of the plants in Southern Africa but also in India, Russia and China.

“Owing to the backing of SMS Group, one of the largest players in the metals industries, Metix is able to provide technologies that it was unable to offer before, such as rectangular furnaces and direct-current electric furnaces,” asserts Metix deputy sales director Klaus Schmale.

He adds that Metix can rely on SMS Group’s global expertise in furnace engineering and design with the constant knowledge transfer that occurs between SMS Group and Metix.