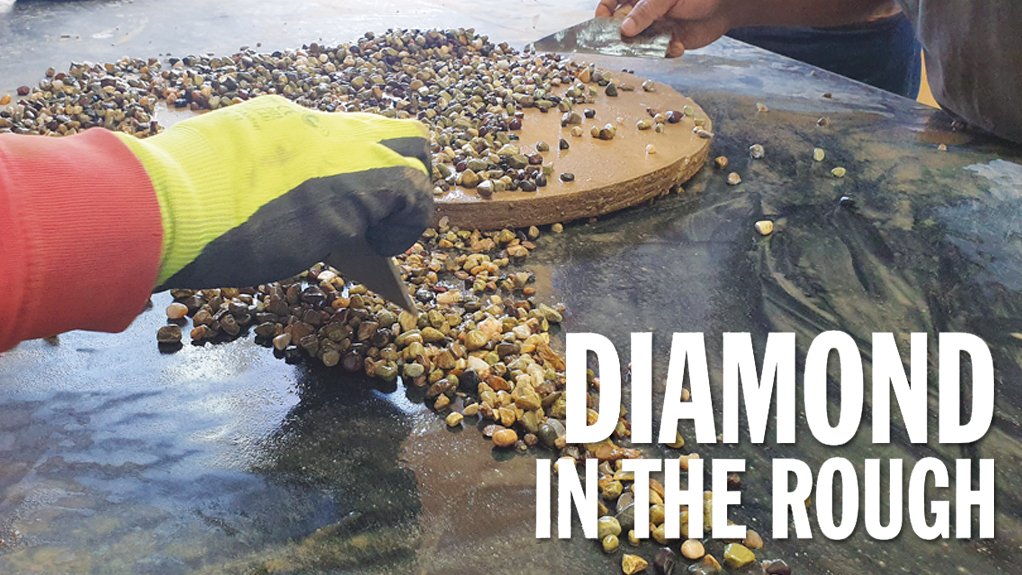 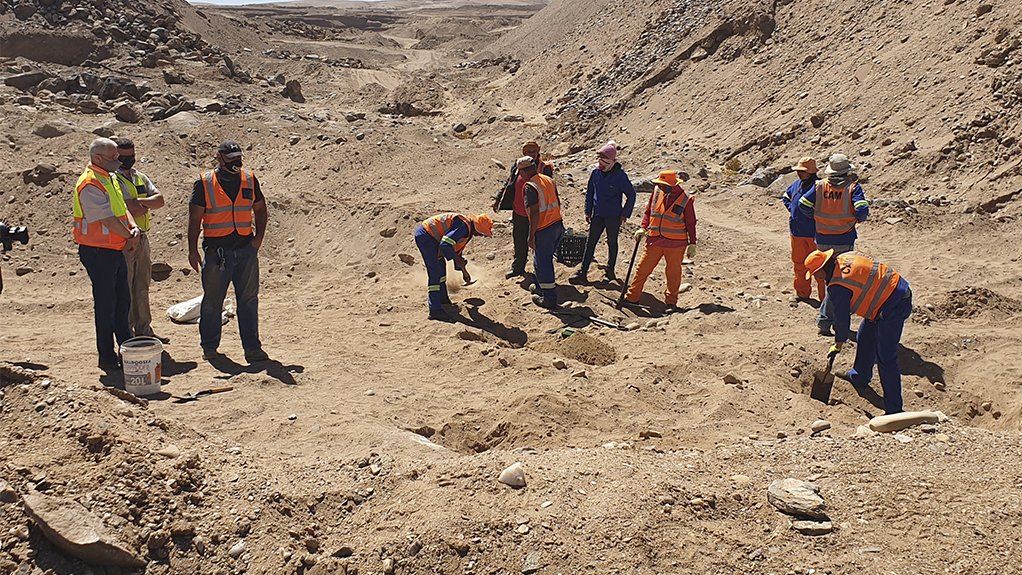 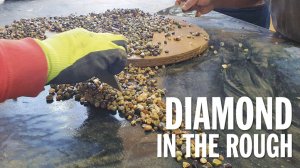 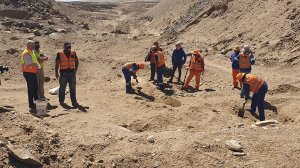 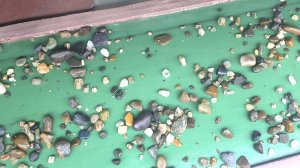 In the midst of a desert wilderness, for about 109 km from the south bank of the Orange river, which forms part of the border between South Africa and Namibia, miner Lower Orange River Diamonds (LOR) has found a solution to illegal mining, a Community Artisanal Mining (CAM) project, which the company is implementing.

LOR CEO Chris Kimber says the 41 343 ha of land in the Richtersveld, of which LOR is the mining right holder, is “arguably the world’s largest alluvial diamond mine, mining over three-million tonnes of gravel per month and employing over 2 300 people”.

After illegal mining had reached a crisis point in 2018 at various operations throughout Namaqualand, LOR established the CAM project with the help of and input from the Department of Mineral Resources and Energy (DMRE) and the South African Diamond Producers Organisation (Sadpo). The project’s inception also followed numerous meetings and consultations with the surrounding four villages.

Kimber explains that the LOR model is premised on the entering into of joint venture (JV) partnerships with large and independent alluvial miners who have a proven track record.

These JV partners are allocated independent mining sites within the LOR mining right.

The CAM teams have been allocated mining areas within previously mined areas, as well as within areas that are contractually allocated to LOR JV partners.

LOR Diamonds legitimised the CAM bedrock-sweeping operations, with assistance from the DMRE, by concluding mining contracts with every CAM team.

Previously, under the illegal regime, diamonds would be sold through intermediaries, with limited price benefit to the community, as the true value would be paid to the intermediaries.

The CAM project also allows for a sense of “community ownership”, with the community now considered JV partners, and falling within the protection, and under the regulatory environment, of LOR, including the identification of people who are not genuine local residents.

Additionally, Kimber notes that the project’s ultimate success was in LOR’s willingness to engage in “meaningful conversations and interaction” with the artisanal mineworkers, and effective communication and regular meetings with CAM project representatives. Induction training is also key to the project’s ongoing success.

Within the mining area, LOR commissioned and established (at its own cost) a new final recovery plant at Bloeddrift, which comprises a classifier and four jig plants, with the final concentrate being recovered through X-ray technology. This resulted in increased and improved recovery capacity at the operation.

LOR also provided the necessary equipment, including a crane truck and one-tonne bags for operating staff to collect the gravel amassed by the mineworkers and transport it to the final recovery plant.

Additionally, LOR contracted and paid for on-site medical examinations for CAM project members, as the costs of yearly medical fitness tests were “exorbitant”, considering that the closest testing facility is more than 100 km away.

Other benefits and arrangements include communication through WhatsApp groups, as well as regular meetings with CAM representatives.

Kimber notes that LOR conducts daily site inspections to ensure safety before any operations start. “Adverse weather which may affect safe operations is communicated on the WhatsApp group, and no operations may start until the ‘all clear’ is communicated,” he explains.

The company provides sales revenue results and makes them available for inspection by all CAM members, and continuously forwards updates to the DMRE.

Meanwhile, the identification and opening of new bedrock sites is ongoing.

The mineral assets involved in the CAM project comprise alluvial diamond mining operations in one licensed area, in the Northern Cape, and include Baken (including Xheiss), Bloeddrif, Nxodap, Jakkelsberg, Suid Hek and Reuning.

LOR is also the lessee of a notarial mining lease, granted by the State, and is considered to be the lessor and the registered owner of the mining area across the 41 343 ha of land.

A 2021 study by Sinazo Dlakavu of the AEON Institute at Nelson Mandela University, on the status of the small and junior diamond producing sector in South Africa, notes a sharp decline in small and junior diamond mining activity, following the promulgation and implementation of the Mineral and Petroleum Resources Development Act (MPRDA) in 2004. The study also notes that the miners continue to face several challenges.

Further, the Covid-19 pandemic has had a far-reaching negative impact on international and local diamond producers, making it “immensely challenging” for the small and junior diamond mining sector.

Dlakavu’s study identifies an urgent need for a review of the existing disabling mineral and mining policy frameworks that apply to this sector.

It emphasises that unless far-reaching changes and enabling and sustaining mineral policy interventions are implemented as soon as possible, “the small and junior diamond mining and development sector will contract further, with further negative consequences for employment and job creation in South Africa”.

When the MPRDA came into effect, there were about 2 000 diamond miners in this part of the diamond producing sector, employing about 25 000 people – a figure that has plummeted to about 220 small and junior mining operators currently, with a drastic reduction in employment numbers, estimated at about 5 720.

Therefore, in the past 17 years, South Africa’s small and junior diamond mining industry has contracted by about 85%.

Since 2013, there also appears to have been a decrease of about 61% in prospecting right applications in the Northern Cape, where the bulk of alluvial diamond mining – more than 90% – is conducted, and such applications are largely the ambit of entrepreneurs, local private operators and farmers.

However, similar to many other mining activities, illegal diamond mining is increasing rapidly, which Sadpo attributes largely to “poorly considered policy”.

With a yearly salary bill of about R550-million, this industry is considered to be the primary employer in remote rural areas in the North West and the Northern Cape, where the unemployment rate is officially at 50%, although in many small towns the figure is as high as 80%.

The sector, prior to its decline, produced about 300 000 ct/y, valued at R4.2-billion, with foreign exchange earnings from production estimated at R3.2-billion. The declining production and revenue trends have been further negatively impacted on by Covid-19.

Taking this into account, Sadpo notes that “this important small mining sector” faces considerable challenges and further decline, unless its potential contributions in respect of the exceptional quality of its diamond production, financial contribution, and job creation benefits are recognised and supported, and an enabling diamond mining policy is introduced as a priority.

Sadpo says alluvial deposits, experience in exploiting them, the requisite skill sets and technologies are all available, but recommends that these be recognised in South Africa to revitalise and expand the small and junior diamond mining sector to its former “heyday”.

“This will benefit financially challenged provinces, such as the North West and the Northern Cape, and create new employment,” the organisation avers.

With revised and customised enabling mineral policy and regulations, the small and junior, less capital-intensive diamond mining sector should be a driver of transformation and an incubator of black-owned and -operated entrepreneurial diamond mining businesses, Sadpo says.

It warns, however, that this will happen only if the Mining Charter III policymakers “recognise the pitfalls and problems of applying a one-size-fits-all approach, designed for a handful of large publicly owned companies, to an industry dominated by small, privately funded entrepreneurial diamond mining businesses”.

Taking this into account, Sadpo stresses that “there is an urgent need for consultation between government and the junior diamond mining industry to agree on amendments to Charter III provisions and implementation guidelines that will enhance and promote transformation and empowerment in the industry”.

Simultaneously, the junior mining sector needs to be able to survive, Sadpo notes, so that it “continues to play a vital role in South Africa’s broader minerals industry”.

He notes that a simplified policy framework would also go a long way towards curbing the unacceptable levels of illegal mining and can only help to formalise and regulate all diamond mining, confirming Sadpo’s support of the LOR CAM project.