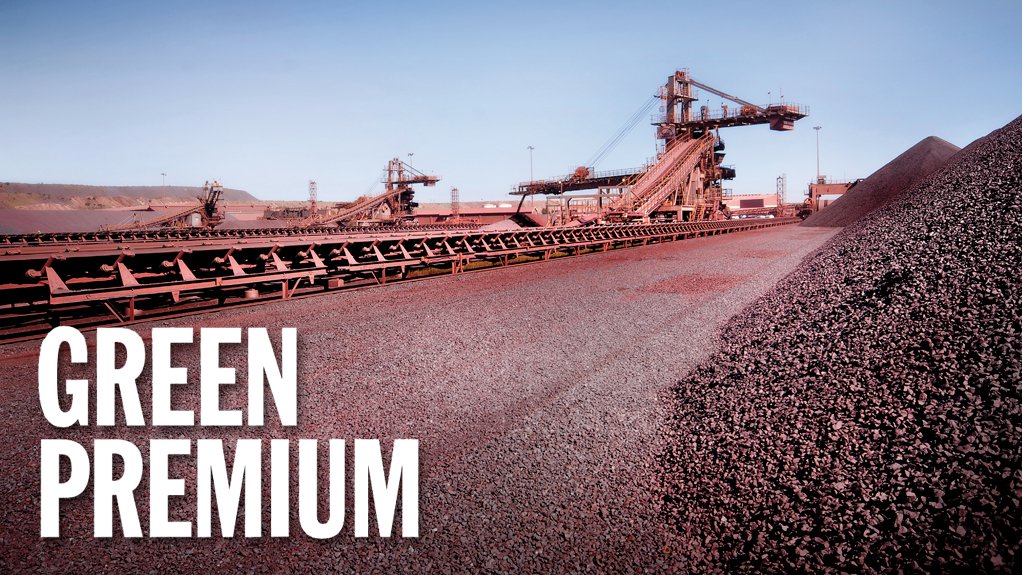 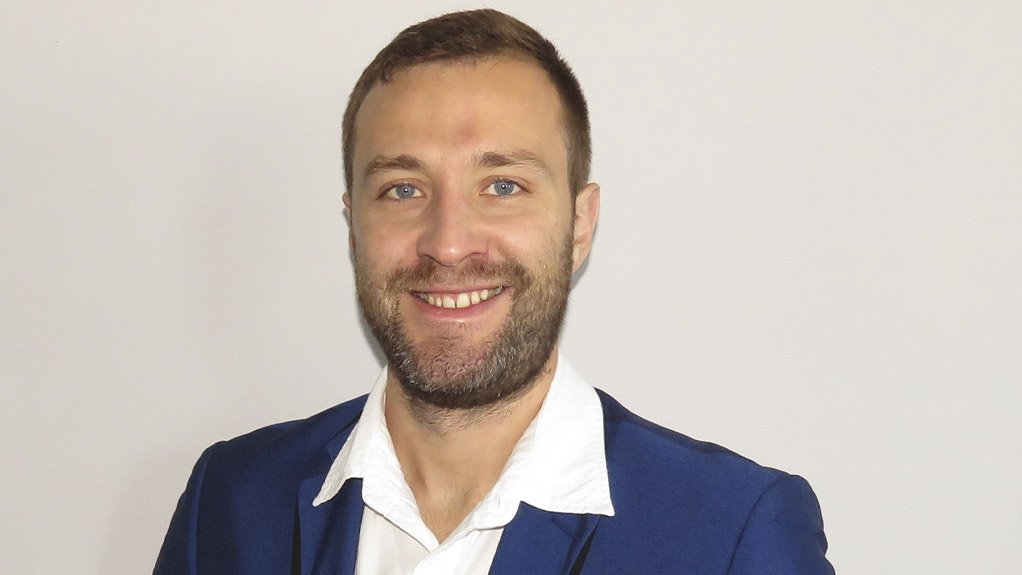 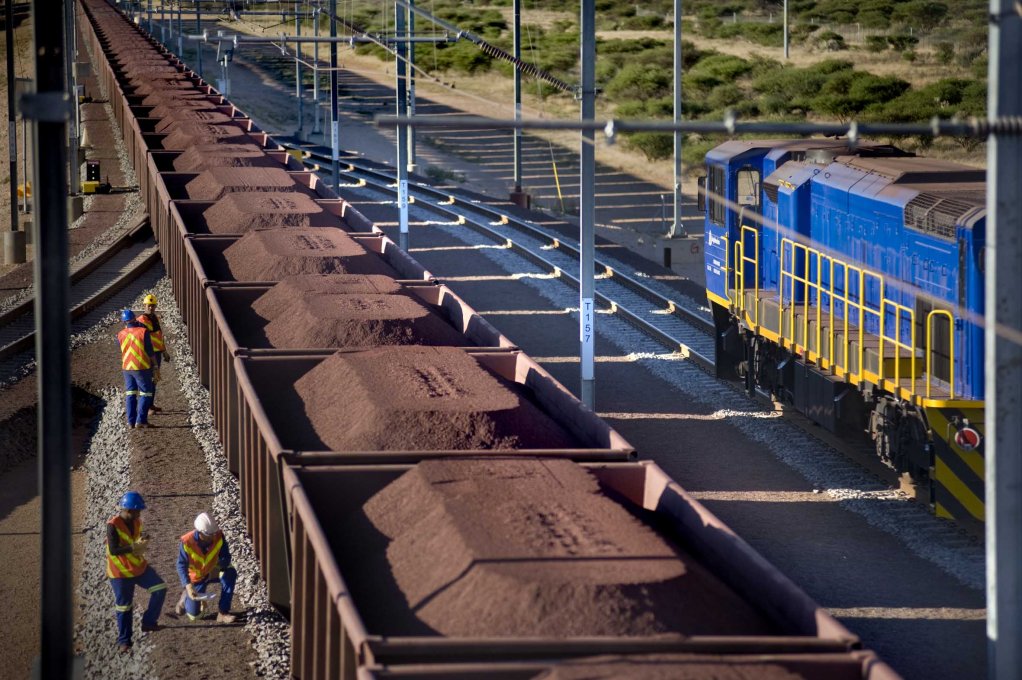 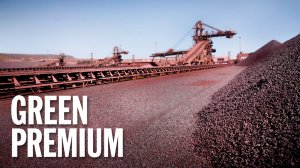 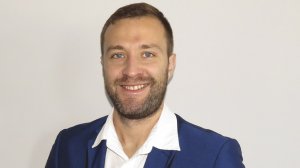 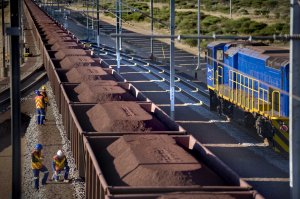 BRANDON DAVOREN Fortunately, many mining companies are promoting and pushing renewable-energy projects in South Africa, which creates the potential for green iron-ore mining
ON THE FAST TRACK? The Western Australian government and several mining companies have committed to investigating the viability of sustainably processing iron-ore to green steel

Amid the global trend towards sustainability and in the wake of the twenty-sixth United Nations’ Climate Change Conference of the Parties, or COP26, mining companies and steel producers are considering the viability of ‘greening’ the steel industry and, as a result, the iron-ore sector.

The global steel industry is said to account for about 7% of global carbon emissions, with consultancy Wood Mackenzie stating in August that emissions in the steel sector must fall by 75% to limit global warming to within 2 °C.

This would require a reduction from over three-billion tonnes of carbon dioxide equivalent (CO2-eq) in 2020 to about 780- million tonnes by 2050.

In a news release, Wood Mackenzie outlined five outcomes that would have to be achieved to reach this goal: doubling scrap use in steelmaking, tripling direct-reduced iron production and use, reducing global average electric arc furnace emissions’ intensity by 70%, reducing blast furnace – basic oxygen furnace – emissions intensity by 30%, and capturing and storing 45% of the residual carbon emissions.

Davoren says that, while there can, and should, be increased recycling of scrap steel, “eventually one reaches a point where the premiums and the cost per ton are so high that crude steel is cheaper, and price is still a very important determining factor for manufacturers”.

“As such, if there are viable, greener ways of producing steel, those are where the industry should focus its efforts.”

While the use of carbon capture technologies at steel plants is likely to increase, primarily because many are already tested and market ready, a significant amount of research seems to be focused on the reduction of iron-ore with hydrogen.

Davoren notes that the European steel industry likely intends to consistently produce green steel by 2025. “This would be in relatively small amounts, probably under ten-million tonnes a year, primarily for use in the automotive sector or in specialised sectors that are moving in a green direction very rapidly.”

This is evidenced by the fact that vehicle manufacturer Volvo unveiled the first vehicle made with green steel on October 13. News agency Bloomberg reported that the electric dump truck weighs 8 t, has a virtual driver and is meant for quarries and mines.

Davoren adds that, if multinational steel producer ArcelorMittal achieves success with its green steel offering in Europe, its South African operations might also consider producing green steel; however, he stresses that such a development could only occur in the “very long term,” given the country’s persistent electricity constraints and reliance on coal-fired power.

“Fortunately, many mining companies are promoting and pushing renewable-energy projects in South Africa, which creates the potential for green iron-ore mining – using renewable energies to supply all of a mine’s energy needs, including the charging of electric mine vehicles.”

Davoren tells Engineering News & Mining Weekly that South Africa has good iron-ore grades for steelmaking, and that even if miners reach areas with lower grades, the material can be upgraded using magnetic separation or froth floatation.

“Green iron-ore would probably fetch a premium, in the same sense that green aluminium has a premium for being produced at less than 4 t of CO2 per aluminium ton.”

He notes that the most difficult aspect of producing green iron-ore locally is “actually starting the infrastructure plans”.

While Davoren understands the inclination to take the path of least resistance, namely coal, the introduction of CO2 tariffs will ensure that all production processes become significantly more expensive.

For example, if ArcelorMittal continues to produce steel using coking coal at a plant using power supplied by coal-fired power stations, “it becomes far more expensive than you’ve realised if you add all those CO2 tariffs to the steel price”.

In addition to altering the energy mix at a national level, the country would need to create “long-term infrastructure plans that are focused far further in the future than one would expect”.

Davoren cites, for example, countries’ rethinking plans for hydropower stations, given that climate change heightens the likelihood of droughts, and rethinking transport infrastructure, as mines cannot “keep trucking millions of tonnes to ports”.

“In the longer term, the firm forecasts iron-ore prices declining from an average of $155/t this year to $65/t by 2025 and $52/t by 2030 – driven by a combination of weaker demand growth and stronger supply,” the article stated.

Davoren agrees: “From about 2023 onwards, despite increased steel demand from the recovering automotive sector and as a result of increased stimulus in infrastructure projects, including renewable-energy projects, the iron-ore price should fluctuate but trend downwards, ultimately stabilising as supply and demand balance out.”

The US Geological Survey notes that 98% of the iron-ore produced globally is used in steelmaking, with Davoren noting that Chinese steel accounts for about 50% of global steel production.

“As such, demand for iron-ore and the other constituents for crude steel production is driven by China, which produces in excess of 90-million tonnes of steel a month.”

The largest iron-ore producer is Australia, which accounts for about 38% of global production, of which 60% is exported to China.

Davoren adds that BHP recently opened its South Flank mine, which is the “largest Australian iron-ore mine to start production in roughly 50 years”.

Moreover, Brazil is ramping up again after successive tailings disasters and stringent Covid-19 restrictions and, combined with China’s having slowed its steel production as a means of achieving its carbon emissions targets, the iron-ore market is in surplus.

He comments that China has stated that, if steel prices go up, it will increase production to calm commodity prices, but, ultimately, Afriforesight expects the iron-ore price to average below $100/t during 2022, ending the year at about $95/t.

Fitch Solutions also expects iron-ore prices to remain under pressure into 2022, as it believes that Chinese demand peaked during the first half of 2021.

Davoren notes that, despite the price forecasts, there is a trend of Africa-based iron-ore industries starting to increase iron-ore production. This trend is primarily driven by the record high prices of about $240/t recorded in May and China seeking to reduce its reliance on Australia.

He points to Angola’s first iron-ore shipment since 1976. About 60 000 t was sourced from the Cutato mine, in the country’s Cuando Cubango province.

“Sierra Leone has also started moving shipments and in other countries, such as Liberia, we have players like ArcelorMittal trying to push production. In Namibia . . . 53 000 t were moved.”

Botswana also sent an iron-ore shipment to China in September.

“In the grand scheme of things, these shipments are not very large, especially when compared to Australia’s output of more than 800-million tonnes a year.” However, he notes that the shipments are a good indication that the African industries are not stagnant.

“Notably, the markets have become very volatile recently, so these mines’ continued profitability is largely dependent on whether they have firm purchase orders in place.”

For many of these new players, given the price forecasts, it might be better to put the mines on care and maintenance and restart operations when the price improves.

Davoren adds that, despite the trade dispute between the two, the reductions in Australia’s iron-ore exports to China were negligible.

However, that does not mean that China is not looking to diversify its iron-ore sourcing.

“The Simandou reserve, roughly two- billion tonnes, in Guinea, is the largest high-grade iron-ore deposit in the world. There is a Chinese consortium that plans to develop Block 1 and 2 to start production by 2025. Blocks 3 and 4 are largely owned by Rio Tinto, which holds a 45% stake.

“Rio has been slowly selling off its shares, and if this continues, China could own significant shares in a massive, high-grade reserve,” he explains.

This would undoubtably offer the country more leverage in future trade disputes with its primary iron-ore supplier.

Davoren says that, in terms of growth potential, there are opportunities for the larger mines, which is evident in Kumba Iron Ore’s aiming to expand Sishen: “It’s clear that there is long-term feasibility.”

Afrimat has also diversified into iron-ore and is ramping up at its Jenkins mine, in the Northern Cape, while African Rainbow Minerals (ARM) notes that expansions are ongoing at its iron-ore operations.

The primary challenge, besides electricity- related concerns, is logistics.

“ARM and Kumba have cited Transnet as a limiting factor. Kumba, in its third-quarter production report, stated that it will slow production purely because it can’t move its volumes to Saldanha Bay.”

Davoren says discussions are under way to address the rail issues – by either improving the rail infrastructure or increasing the wagon size – but cautions that, if these are not addressed, the industry will regress, regardless of demand.

Moreover, if local mining companies are unable to exploit the opportunities presented by decarbonisation and green iron-ore, it is likely that their long-term profitability, as well as sustainability and ability to retain a social licence to operate, will suffer from their inaction.