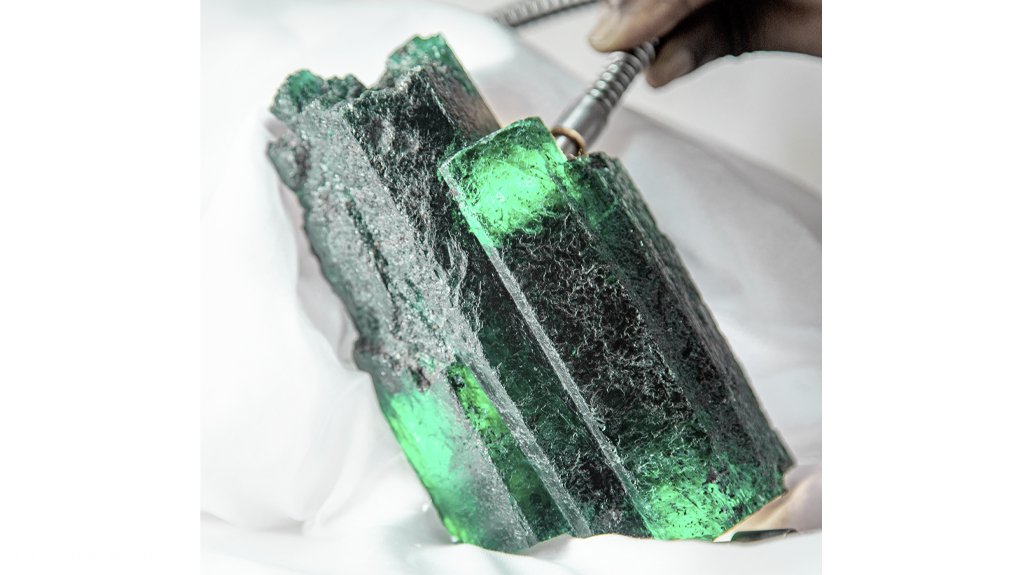 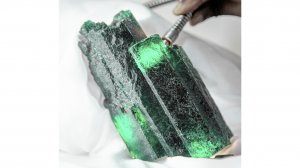 Gemfields has uncovered a 7 525 ct (1 505 g) gemstone – which it has called Chipembele, meaning “rhino” in Bemba (an indigenous dialect in Zambia) – at its Kagem emerald mine in Zambia.

These three gemstones were formed within relatively close proximity at the Kagem mine, which is the world’s single largest producing emerald mine – owned by Gemfields in partnership with the Zambian government’s Industrial Development Corporation.

Chipembele was discovered by geologist Manas Banerjee and Richard Kapeta (who was also the team leader for the discovery of Inkalamu in October 2018) and his team at Kagem.

They say the discovery “left everyone speechless”, while Kapeta shouted “look at this rhino horn”, which is where the gemstone got its name.

Naming of uncut emeralds is a tradition reserved only for the most rare and remarkable gems, Gemfields says in a statement.

While no official record exists, it is thought that not more than a couple of dozen gemstones have ever been given their own name, and it is “extremely unusual” to encounter a gemstone weighing more than 1 000 ct, the miner adds.

Chipembele formed under near perfect conditions, enabling the combination of the elements beryllium, chromium and vanadium to crystalise into large, distinct hexagonal crystal structures with glassy surfaces.

The recovery of such a large high-quality emerald was made possible by the skilled Kagem mining team, the miner states.

The miner adds that the rich, golden green hue and “gemmy nature” of this emerald will be appealing to buyers looking to yield fine-quality faceted emeralds after the cutting and polishing process.

Gemfields notes that Chipembele will be sold during its next emerald auction, with viewing expected to take place from early November.

Selected premium emeralds brought to the auction will once again receive Gübelin Gem Lab’s “provenance proof” service, which embeds nanoparticles coded with information within the gemstone that provides key details pertaining to the gemstone’s origin, such as the miner, location of the mine and date. This process provides greater clarity of origin to gemstone customers, aiding transparency and trust in the industry.

The winning bidder for Chipembele will be given the option of a unique DNA nano-tag identity – developed by Gübelin – ensuring the cut and polished gems that it yields can be identified and certified as having originated from the gemstone.

Meanwhile, Gemfields points out that 10% of the sales price of Inkalamu was donated to aid conservation efforts benefitting its namesake, shared between large carnivore conservation projects in the Niassa reserve in Mozambique and carnivore tracking projects in Zambia.

Chipembele will maintain this tradition, with a share of the sales proceeds to be used to support the North Luangwa Conservation Programme in Zambia, to aid critical black rhinoceros conservation efforts.

“A key Gemfields tenet is that Africa’s gemstone wealth must contribute meaningfully not only to host-country economies, but also to conservation efforts, host communities and the next generation by way of education, healthcare and livelihoods projects,” says Kagem sort house assistant manager Jackson Mtonga.