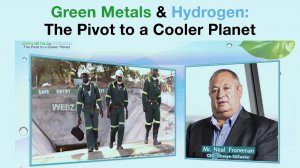 JOHANNESBURG (miningweekly.com) – Platinum-group metals (PGMs) are poised to be a very significant underpin in the green hydrogen economy and Sibanye-Stillwater is intent on ensuring that the supply of PGMs is sustainable and that the company is part of the global climate change solution, Sibanye CEO Neal Froneman told a global online conference on Friday.

Addressing attendees in Tokyo, Beijing, Moscow, Johannesburg, London and New York, Froneman said that while PGMs continued to play their long-standing role of cleaning the air through their presence in the autocatalysis systems of the exhausts of internal combustion engine vehicles, the metals would experience a slight change in demand in the medium-to-long-term as they catalysed hydrogen fuel cells and hydrogen-generating electrolysers in the world's advance toward zero-emission. (Also watch attached Creamer Media video.)

Speaking at SFA Oxford’s green metals and hydrogen presentation covered by Mining Weekly, Froneman emphasised that the Johannesburg- and New York-listed Sibanye was going all out to fully understand the implications of:

The unmatched chemical and physical properties of PGMs make them extremely difficult to substitute, a slide projected on to screens emphasised.

Offering confidence to the global audience was the presentation's next slide, which showed that autocatalyst demand for PGMs is continuing to remain robust as electric vehicles, including fuel cell electric vehicles, take up their positions in the build-up to 2030.

Beyond 2030, green hydrogen was poised to become competitive, with demand beyond Sibanye-Stillwater’s forecast period driven by hard-to-abate industrial applications.

Regional bus, train and truck transport was highlighted, along with residential heating, high-grade heating and steelmaking.

“So, we have significant confidence in the future of the hydrogen economy,” Froneman explained.

Demand for iridium in PEM electrolysers would become a significant requirement beyond 2030 and there was an opportunity for industry collaboration to align iridium demand with supply through thrifting, substitution, and innovative recycling, Froneman emphasised.

PGMs-containing PEM electrolysers were depicted on a slide as representing 70% of Sibanye’s pipeline of projects to 2040.

In describing thrifting of iridium as being vital for cost-reduction and technology sustainability, Froneman recalled the PGM industry’s long history of thrifting and substitution.

“We saw thrifting in autocats, and it is the right thing. We don’t want to be wasteful. We’ve got to get the costs down,” Froneman emphasised, as he displayed a slide showing the cost breakdown for a 1 MW PEM electrolyser moving from full system, to stack, to catalyst coated membrane (CCM).

“The point that needs to be made is that the contribution of iridium and platinum to CCM can be significant, depending on price. But relatively, it’s a small part of the overall costs. Scope for other costs to decrease more with scale-up are real, so it does put iridium and platinum in the spotlight.

“As a good partner, we’d want to make sure that we can produce these metals at the lowest possible cost, with a fair profit. There is a lot of opportunity for the industry to collaborate in aligning with iridium demand,” he said.

Sibanye is one of the biggest producers of iridium.

“We’ve been through the cycle of thrifting. We’ve been part of using substitution to assist the original-equipment manufacturers to reduce their costs, and ensure sustainability of our businesses as well, and we would be happy to be part of recycling and developing open-loop systems with the end-users,” Froneman said.