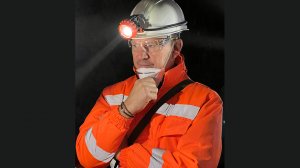 The first of these is Tulkubash, a near-term opencast heap leach project, and the second a far larger, higher-grade and longer-term underground Kyzyltash project.

“One of the opportunities that we’ve been talking to the multilaterals about is participating in a project to either produce our own hydroelectric requirements or additionally connect to the grid, which is around 20 km away, which will allow us to have clean power.

“We certainly believe that by the time we get to the Kyzyltash project, that will be resolved and we’ll be able to have a very green and sustainable production out of the Kyrgyz Republic,” Chaarat CEO Mike Fraser, who is well known in South Africa as the former COO of South32, told Mining Weekly in a Zoom interview. (Also watch attached Creamer Media video.)

Among the multilateral developmental institutions active in the Kyrgyz Republic and Central Asia is the European Bank for Reconstruction and Development, which is reportedly very interested in being part of the investability of the Kyrgyz Republic’s mining sector.

“Chaarat, for many people, has been off the radar. It’s a very small company today within the Aim sector. I do believe that there is a dearth of real quality midtier gold miners that have the opportunity to deliver the growth that Chaarat has got in its portfolio.

"The nice thing is that Chaarat is a company that is fairly undervalued in our opinion and for those that stay the journey with us, we believe that Chaarat will be a good place to be.

"If we can deliver on our growth ambitions, this should be a good story. Hopefully people who don’t know us, will start following us,” said Fraser

When Tulkubash’s bankable feasibility study was put out in May last year, the plan was to kickstart the project in January this year. However, this coincided with the Kyrgyz government taking control of the Kumtor mine from Canada-based Centerra Resources.

The dispute between Centerra and the Kyrgyz Republic was a slow-burn issue. It had been around for many years until the resolution announced on April 4, which involves the Kyrgyz Republic taking over the long-term operation and ownership of the Kumtor mine in exchange for some of the shares it held at the corporate level in Centerra.

“The resolution of that dispute is an important step forward for us. Many of our financing partners were waiting for that resolution to be announced before they would re-engage on the funding and the financing of our projects in Kyrgyzstan,” said Fraser.

Completion of the financing of the Tulkubash project is now expected in the second half of this calendar year, which should give Chaarat the ability to pour first gold by probably the backend of 2024, early 2025, which is perfectly aligned to the company’s overall growth plans.

“These will be very low cost and competitive ounces to add to our portfolio,” said Fraser, who believes Chaarat has the capability, experience and capacity to add more ounces to this portfolio.

He believes the share price is trading at a very big discount to its underlying asset value and that progressing the projects will certainly enable the company to create value for all stakeholders.

In the 12 months of 2021, Chaarat lifted its earnings before interest, taxes, depreciation and amortisation by 45%, reported cash on hand of $11.1-million and halved its debt.

“As you can appreciate, a large part of our leverage comes from commodity prices and also our ability to put additional third-party material through our Kapan mill. That mill has not been operating at full capacity. Last year we certainly benefitted from additional third-party ore processing and this year we will push that very hard.

“Our guidance this year is between 55 000 oz and 60 000 oz of gold equivalent, but again we were able to exceed it in the prior year and if we are able to continue to fill the mill, that should be tested at the top end of that range. We’re quite comfortable with where we’re at and obviously gold price being supportive, we should see another strong year from an earnings perspective as well,” he said.

Mining Weekly: Will Chaarat remain a gold-only mining company or could base metals be a potential diversification?

Fraser: I’ve been with the company three months now and the first three months has really been about evaluating our capability in the business, looking at where our strengths and weaknesses are, where the opportunities are at for us. Whilst Chaarat was set up as a former Soviet Union consolidation plan, a developer of assets in that region, I certainly think there’s an opportunity for us to pivot into other regions within a time zone of probably four to six hours Greenwich Mean Time and that gives us a big blanket of opportunity to access projects. Secondly, I do think that if you look at our polymetallic Kapan mine. We produce a very interesting combination of gold, silver and zinc and I think we can leverage some of that experience. If the right industrial commodity and industrial metal comes up, be it copper or zinc, certainly we would be open for those opportunities as well.

Pictures indicate that the Kyrgyz Republic’s beautiful environment deserves to be well protected. What is Chaarat doing about protecting that environment, as well as tackling its own Scope 1 and 2 emissions?

We are committed to very high standards of environmental performance. Our ambition as we grow is to step up on to the main board of the London Stock Exchange. That will bring its own level of obligations to be a high-performing, sustainable miner. The Tulkubash project is initially going to be using diesel generators, because of where we are, to support our processing facilities. But what is really nice about the Kyrgyz Republic is there’s a high level of hydroelectric opportunities.

What are you doing about assisting the local community?

That’s one thing I can say, there’s been a huge amount of community benefit already through the existence of Chaarat. We’ve already created a couple of hundred jobs. People are already working, building on our camp sites, so we’ve already had a material economic impact in this region. We continue to provide investment in upgrading the schools, health facilities and social activities in the region. But we believe that the big value is going to come from the development of the economic activity by having one and eventually two operating mines, which will create a significant amount of economic upliftment of the community in that region.