26th October 2001 State metals and minerals researcher Mintek says that the organisation’s work performed for now-liquidated Australian zinc producer Pasminco on hazardous waste is of value to the environment worldwide and should be applauded, rather than slated. →

12th October 2001 A technology demonstration centre has been set up by metals and minerals research organisation Mintek, of Johannesburg, to assist grassroots operators and small business in the field of mining. →

By: Marcel Chimwala     5th October 2001 In a bid to attract investors to its mining sector, Malawi is offering several incentives. →

By: Keith Campbell     5th October 2001 THE Southern African region of the global Mining, Minerals and Sustainable Development programme has completed its basic research programme & made 300 recommendations to its stakeholders. →

5th October 2001 Metso Minerals, formerly known as Nordberg, has merged with Svedala to form a new global market leader in the supply and service of processes for industries related to rock-size reduction, classification, minerals separation and recovery, materials-handling and wear protection. →

South Africa in 'Russia with love'

By: Irma Venter     21st September 2001 Russia is not for the faint-hearted as much as Africa is not for ‘sissies’, and South Africans have acted opportune in exporting their ‘can-do attitude’ to the icy-cold former cradle of communism. →

21st September 2001 State-owned minerals research institution Mintek has furthered the development of a software platform from which a range of metallurgical process stabilisation and optimisation modules can be run. →

21st September 2001 Scientists from Australian research organisation CSIRO are developing a new breed of fast sensors for use in the online analysis and identification of mineral ores. →

21st September 2001 A new bioleach facility has been successfully commissioned in China with input from South Africa. →

The big growth or yield debate

By: Terence Creamer     21st September 2001 Recently Anglo American CE Tony Trahar was confronted with a challenging question about the positioning of the multi-commodity group. He was asked by a London-based analyst whether he wanted Anglo to be a ‘high-growth’ or a ‘high-yield’ company. →

By: Martin Zhuwakinyu     14th September 2001 A collaborative research initiative launched in 1999 by coal-mining houses and research and educational institutions is already producing positive results for the industry which, of late, has increasingly become aware of the need to surmount certain technical hurdles to retain its position as a... →

By: Martin Zhuwakinyu     7th September 2001 The recently-merged BHP Billiton group will decide on whether or not the planned expansion of its wholly-owned Hillside Aluminium smelter will be implemented before the end of the year, a senior company official tells Mining Weekly. →

By: Kenneth Creamer     7th September 2001 China and India, awakening giants hungry for new mining technologies, are looking to South Africa and other mining nations to modernise their mining sectors. →

7th September 2001 A five-year loading and hauling contract worth R40-million a year has been awarded to Super Stone Mining, of Kimberley, Northern Cape. →

7th September 2001 The first multimillion-rand high-tech dry mill from Particle Separation Systems has been installed in one of South Africa’s largest platinum-producing mines. →

31st August 2001 Go-ahead for the construction of a R1-billion smelter project associated with the R2-billion IHM mineral sands project being built in Kwazulu-Natal has been received following an agreement between Kumba Resources and Australian-based Ticor. →

By: Keith Campbell     24th August 2001 SADC is determined to beneficiate the products of its mining industry →

Research to promote more use of downstream resources

By: Zonika Botha     24th August 2001 The world’s largest gold producer, Anglogold, has renewed its commitment to invest in continuous research and development programmes to realise its quest for operational excellence. →

17th August 2001 South African mining has, in the past two years, been contemplating several proposed changes to the way it conducts its business. The most critical of these will come on the back of the proposed Minerals Development Bill, which has received much publicity. However, an ambitious, but less... →

17th August 2001 South African mining has, in the past two years, been contemplating several proposed changes to the way it conducts its business. →

By: System Author     3rd August 2001 South Africa’s State-owned minerals research organisation Mintek, together with technology partner Bactech Enviromet Corporation of Canada, have taken the bioleaching of base metals a step closer to commercialisation. →

By: Keith Campbell     3rd August 2001 Progress is being made in the India–South Africa geological and mineral resources co-operation programme. →

Start planned for big Oz iron-ore mine in 2002

20th July 2001 The feasibility study for the Hope Downs iron-ore project in the Pilbara region of Australia is due to be concluded at the end of the year by which time the technical evaluation and financial modelling will be in place and the appropriate environmental submissions to the regulatory authorities... →

20th July 2001 Although Swiss mining company Xstrata does not agree with all aspects of a report into alleged exposure to vanadium compounds issued by the Department of Minerals and Energy (DME), it is happy with the recommendations made and will be implementing them as soon as possible. →

Gem plant gets a bigger budget and better features

By: Irma Venter     20th July 2001 Mining companies proving willing to introduce new technology, and to educate and empower their people in using this technology optimally, will continue mining far into this new century. →

13th July 2001 Minerals technology research and development organisation Mintek, of Johannesburg, and its partner, BacTech Enviromet Corporation, of Canada, have announced that their custom bioleaching treatment plant – with initial capacity of 65 000 oz of gold a year in Shandong Province, People’s... →

13th July 2001 East Rand company Baker Process has received an order from Fluor Daniel SA for a deep-cone paste thickener package, the first of its kind to be manufactured in South Africa. →

13th July 2001 Ethiopia loses revenue worth $25-million a year due to illegal mining for gold, the Ethiopian mines and energy ministry has revealed. →

13th July 2001 Hitech software company Crusader Systems, of Pretoria and Stellenbosch, the developer of one of the first instrumentation and control products that converts froth image-analysis to useful plant measurements and controls, known as the FrothMaster, has sold the product to a subsidiary a Finnish... →

6th July 2001 South Africans are in the throes of expanding a diamond-mine in the Democratic Republic of Congo (DRC). Mining Weekly can today report that Gauteng company Senet, of Edenvale on the East Rand, already has personnel on site at the mine situated in south-west DRC. →

Another empowerment boost from gem project

6th July 2001 Economic development in the Northern Cape has received a significant boost with the establishment of the R4-million Sedibeng diamond recovery plant situated on the perimeter of the dormant De Beers mine. →

South Africa ‘unique’ circumstances could give it tech-minerals edge

Eagle Graphite and UBC battery research project gets off the ground 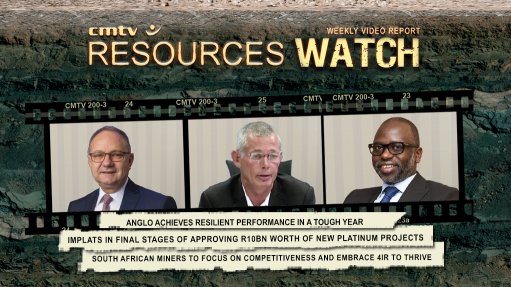 Do you know the history of your TSF?

CPM at the PDAC 2021 - Silver Webinar and Report