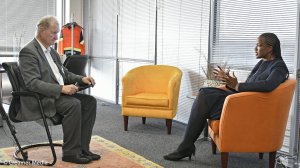 Nompumelelo (Mpumi) Zikalala has hit the ground running as the newly appointed MD of De Beers Group Managed Operations in South Africa and Canada, which employ more than 5 500 people, including contractors.

The focus of the De Beers Group Managed Operations leadership team is on the Venetia Mine, Gahcho Kué Mine and De Beers Marine. The streamlining of operational management and identification of synergies will provide a more sustainable business model in Canada and South Africa. There is also the re-positioning of its technical and sustainability business function, that will be focused on mine closure and future projects.

In her new role, Zikalala replaces no fewer than two CEOs – long-serving De Beers Consolidated Mines (DBCM) CEO Phillip Barton and De Beers Canada CEO Kim Truter. Barton, who has been with De Beers Group for more than 30 years, played a key role in mentoring Zikalala as his successor, while Truter joined the group in 2015 as CEO of De Beers Canada, bringing with him 30 years of mining experience. His achievements at the company include bringing Gahcho Kué into operation in 2016 and the acquiring of the promising Chidliak project in 2018.

In her previous role as deputy CEO of DBCM, Zikalala was responsible for the DBCM strategy, human resources and the consolidation and simplification of its businesses in the country.

In her new role, she is bringing with her more than 18 years of De Beers Group experience to the fore, supported by operations head Allan Rodel, the Johannesburg-based management team and additional support services in Canada.

De Beers Group is an international corporation that specialises in diamond exploration, diamond mining, diamond trading, diamond retail, and industrial diamond manufacturing. The company is currently active in opencast, coastal and deep-sea mining and will soon go underground at the Venetia mine, in Limpopo, where it is investing $2-billion to extend the life of the mine to 2046.

Zikalala is full of enthusiasm about taking on her new challenge and, during her wide-ranging interview with Mining Weekly, she expressed a firm conviction that:

Zikalala grew up in Vryheid, a town in KwaZulu-Natal that is still very close to her heart. She initially wanted to be a doctor but this changed as she progressed through school. She was sponsored by De Beers through the Anglo American group to study chemical engineering and started off as a young metallurgist at the Cullinan diamond mine and also did early stints at Kimberley Mines, The Oaks and Voorspoed.

Zikalala, who holds a BSc in chemical engineering from the University of the Witwatersrand, enjoyed working at the various mines and firmly believes that young engineers need to spend time at the operations, where she recalls learning so much.

Her first general management role was at Kimberley Mines, now owned by KEM JV, where she succeeded in getting through the global economic crisis of 2008 with the help of what she describes as “a very strong team”.

Her conviction that zero harm is possible in the mining industry is based on the success of the Voorspoed diamond mine, in the Free State, that operated for 10 years without a single fatality.

“I feel the pain each and every time I hear about a fatality in our mining industry, simply because I have a fundamental belief that zero harm is possible,” she said.

After Voorspoed, she took a slight detour away from mining when she was appointed senior VP for De Beers Sightholder Sales South Africa in Kimberley, which gave her essential insight into the sales side of the diamond business.

She remains a nonexecutive director of De Beers Sightholder Sales South Africa and has also served as non-executive director for the Black Management Forum and State-owned minerals research organisation Mintek.

She made a point of emphasising to Mining Weekly that more than 40% of the total gross sales of rough diamonds sold by De Beers in South Africa are sold to local beneficiators, which is a great value-adding plus for the South African economy.

Coinciding with her new appointment is the repositioning of the company’s technical and sustainability business function under Burger Greeff. This involves new mining projects, including the Chidliak project, in Canada, mine closure portfolio, as well as the implementation of Anglo American’s all-important FutureSmart Mining technology.

“Whenever I say De Beers, read it as Anglo American because clearly Anglo American owns a huge part of our business. When we look at technology, particularly in mining and processing for Chidliak in the Arctic region of Canada, we’re working with Anglo American technology development head Donovan Waller.

“In technical and sustainability, Anglo American is playing a crucial role. We’re all implementing the Anglo American operating model, to drive operational planning and work management, and is something that we fundamentally believe in,” she said.

The FutureSmart Mining approach will be fully implemented at the high-quality Chidliak project, which was acquired last year from Peregrine Diamonds. Chidliak is located on Canada’s Baffin Island, 120 km north-east of Iqaluit, the capital of Nunavut territory.

“Clearly, the diamond resources are there. The critical aspect for us is to shape that into the mine of the future,” she said.

“At the other end of the scale is mine closure, and much attention is being given to achieving closure at the Voorspoed Mine, Snap Lake and Victor Mine in a responsible and exemplary manner.

“Excellence is also being vigorously pursued at existing operations, where we are driving for P101 performance. The target of P101 is to exceed industry best-practice performance.

Using P101, the Gahcho Kué plant has been elevated well above its nameplate capacity of three-million tonnes a year.

With the $2-billion Venetia underground project extending the life of the Limpopo mine to at least 2046, the flexibility of being able to implement effective existing technology, as well as future technologies, is being provided.

“For us, the mine of the future is about being fatality and injury free,” Zikalala underlined.

“We’re both very proud of what we see happening at Gahcho Kué,” said Zikalala, who has committed to visiting Canada at least four times a year.

She recently spent two weeks in Canada and will be returning during the month of June. She places great store on leadership visibility and also on ensuring that contact is made with critical stakeholders in South Africa and in Canada.

Industrial diamond manufacturing has been a long-standing part of De Beers Group.

Element Six, which produces synthetic diamond and supermaterials in Springs, was established in 1946. As well as being the planet’s hardest material, carbon’s extreme and diverse properties give it high tensile strength, chemical inertia, extreme levels of hardness, thermal shock resistance and thermal conductivity.

Element Six products have for long been used in drill tips and medical equipment, for example.

Then there is De Beers Technology (Debtech), which focuses on upstream technology. Zikalala describes it as having the most amazing X-ray machines and X-ray transmission technology used at the final end of the production plant, the final recovery.

Abroad, there is also De Beers Technologies in Maidenhead, in the UK, which focuses primarily on mid- and downstream technology.

“Having worked in the midstream side of the business, I’m absolutely amazed by what those machines are capable of. It’s not only the accuracy but also the speed at which they sort those tiny, tiny diamonds – and they get it right.

“We also have another business unit that looks at downstream technology. On the gems side, we announced Lightbox Jewellery in mid-2018. That’s a business that’s already operating and we’re constructing our factory in Oregon, in the US,” she said.

Lightbox brings pink, blue and white laboratory-grown diamonds to the jewellery sector in a selection of accessibly priced earring and necklace designs.

“When you look at the approach, it is clearly aligned,” Zikalala enthused.

This was De Beers Group CEO Bruce Cleaver’s comment in the company’s media release that announced her new appointment: “Our businesses in these countries face very different challenges and require a leader of Mpumi’s skill, vision and experience to maximise their full potential. I’m personally very pleased to see her step into this role, which she does with my full support.”

This is an interesting time in the precious metals, precious minerals and commodities markets. Virtually every sector is experiencing major generational transformations brought about by technology, regulations, exogenous political and economic trends and competitive pressures, CPM Group managing partner Jeffrey Christian commented in a note to Mining Weekly.

The buy side and sell side of markets are being impacted by moves towards artificial intelligence and computer- generated trading, the disappearance of market intermediaries and insupportably high operating costs.

“Mining is being transformed as well, with technological innovations long in the works and long overlooked changing the profile, while general investor interest has plunged in what appears to be both cyclical and semi-permanent ways,” Christian added.

“I’m excited. There are huge opportunities but, clearly, we have to do a lot of work to unlock those opportunities,” concluded an upbeat Zikalala.