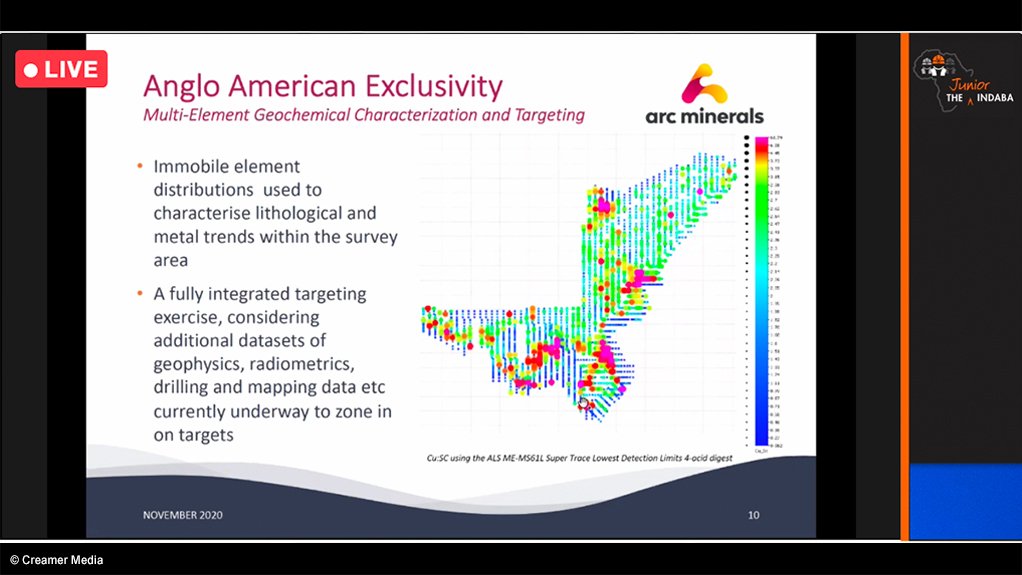 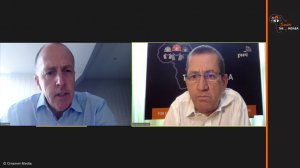 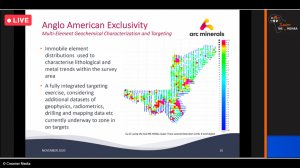 “Obviously, because of the exclusivity with Anglo, we are not able or, in fact, desirous to enter into any other discussions with any other group, but I can say that we have had further follow-up approaches by two major miners, which obviously we are not able progress at this stage. We’ll have to see what Anglo decide to do by the early part of next year, but we’re in a very good place, we're in a very sweet spot, with a lot of interest,” Von Schirnding told last week’s Junior Indaba, chaired by mining luminary Bernard Swanepoel and covered by Mining Weekly.

More than 17 000 m of drilling at a cost of $3.5-million has identified 14 copper targets and Arc’s market capitalisation has grown from roughly £2-million three years ago to nearly $50-million currently.

“We really do believe we’re sitting here on very valuable exploration assets, and that says everything in terms of our valuation today,” said Von Schirnding, whose father, Kurt von Schirnding, was South Africa's former Ambassador to the United Nations.

“Our game plan is to exploit as many of these targets that we’ve identified to make it as attractive to a potential suitor. Now that suitor could be a major, like obviously we’ve just signed up with Anglo American; it could be a mid-cap; or it could be any other potential funder, including private equity, who have also reached out to us.

“We’re not here to simply keep drilling for the sake of drilling, as I think many junior companies do without really an end game in sight. We're equally not here as a lifestyle company. We know exploration is a very tough game. You've seen the lack of really any major success with the majors over the last 25 to 30 years and that, I think, in many respects is because they are not focused enough and they don’t incentivise enough, and I’m a huge believer in incentivisation. So, we incentivise our people based on success,” Von Schirnding emphasised.

“We’re really going for ideally some sort of commercial relationship with a much larger company that can drill this out as it should be because, truth be told, on any of these 14 targets, we really should be spending $4-million to $5-million per target. It is what I call the butterfly approach; we identify, on an opportunistic basis, as many key targets for a partner to come and develop them, either exclusively or  jointly with us,” he added.

Arc has two major licences with 66% interest in Zamsort and a 72.5% interest in Zaco, which collectively cover 872 km2, which are close to First Quantum’s Sentinel and Kansanshi, and Barrick’s Lumwana mines.

The licenses were previously explored by Equinox Minerals and Anglo American Prospecting Services by way of the Zambezi Joint Venture through Anglo’s affiliate Zamanglo Prospecting during the late 1990s as part of the Kabompo project.