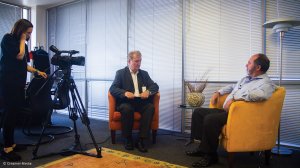 The licences are all in the Kimberley area of the Northern Cape, where DBCM began mining diamonds 130 years ago. (Also watch attached Creamer Media video. At the time of the video interview, 13 licences had been granted, which quickly improved to 16 licences at the time of going to press).

“The wind of change is indeed blowing,” said an elated DBCM CEO Phillip Barton, who is keeping fingers crossed that the remaining 38 prospecting licence applications are also approved.

DBCM has the unique benefit of using its vast databank of geological information and subjecting it to the latest technology in its pursuit of viable new South African diamond mines.

Barton made the point that, from a diamond perspective, exploration has not been comprehensive.

“I’m quite excited about the potential of one day going back to Kimberley in glory,” Barton commented to Mining Weekly Online.

The DBCM board, he said, remained committed to an expenditure of R30-million to R40-million a year on greenfield exploration.

With strong interest being shown in DBCM’s Voorspoed diamond mine, the opencast Venetia diamond mine, in Limpopo, is poised to become DBCM’s only remaining mine in the short term, leaving exploration as the company’s main access to new mine development and growth.

Voorspoed’s disposal process is on track to reach binding-bid stage in the latter part of next month.

DBCM’s aim is to attract a new, lower-cost operator to extend mine life beyond 2020, retain jobs and continue to contribute to economic activity.

Potential buyers of the Free State mine will be required to show a record of technical and financial success, and also meet applicable regulatory and social requirements.

The $2-billion Venetia underground mine project, where the company is intent on using proven technology, is slightly ahead of schedule and below estimate.

“We’ll still be building for a couple of years and as technology comes up and is tried and tested, we’ll look at it and then decide on incorporating it as we go along,” Barton said.

The company is giving itself time to consider all factors, including where technology finds itself on the cost curve and the impact of technology on labour and communities.

The model launched for the development of young black diamond beneficiators is proving successful, with some young historically disadvantaged cutters and polishers even taking part in last year’s Hong Kong Show.

The De Beers aggregation and sales model enables the young black beneficiators to benefit from the consistencies provided by like-for-like diamonds from South Africa, Botswana, Namibia and Canada.

“We’ll definitely continue with it, and then expand on it,” Barton said of the development programme.

The De Beers group is investing in a new digital platform service that provides an immutable tracing of a diamond’s individual journey through the value chain.

Underpinned by blockchain technology, it allows for a secure digital register that creates a tamper-proof and permanent record of interactions.

“This gives one the opportunity to track a diamond from where it was mined right through to where it was sorted, who it was sold to and which hands it moved through until finally ending up with the consumer.

“This gives the consumer the confidence that the diamond, given as a token of love, was ethically sourced, and every process that it went through complied with the highest levels of governance,” Barton commented.