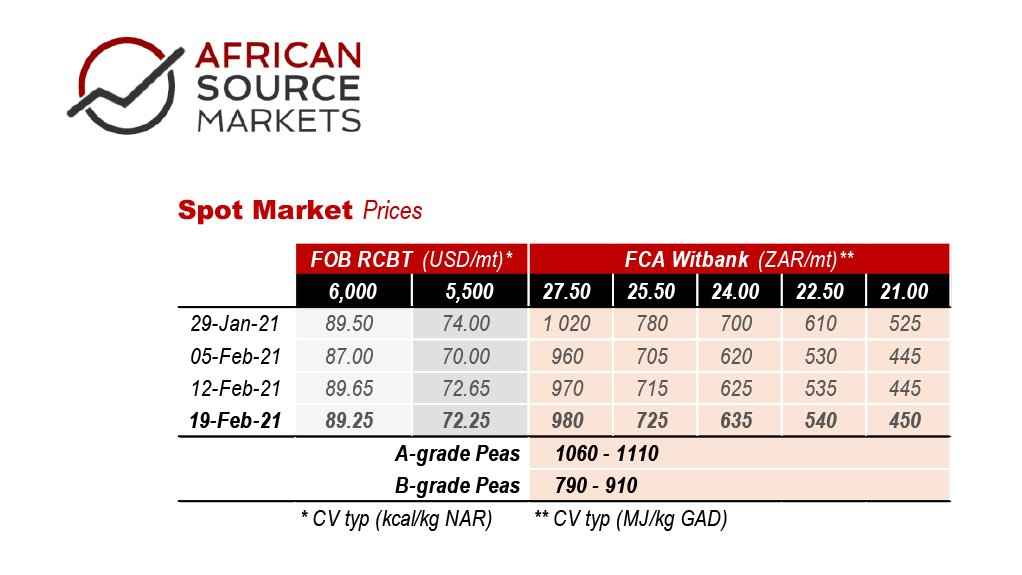 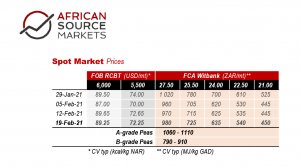 European power and gas prices had a volatile week as recent cold weather subsided. However, coal prices held up well, in a sign that strained renewable power grids tend to fall back on coal and gas as solar power fades, and wind turbine blades ice up. With frozen seas impacting on Russian coal supplies, and sharply higher European coal demand, panamax rates have seen a surge to multi- year highs in the Atlantic.

India has once again proposed new rules to liberalise the sale of domestic coal from captive, State-owned mines, in a move to try and reduce the country’s reliance on imports. As one of the world’s largest coal producers, Coal India could do real damage to South African exporters if it gets its act together to liberalise its coal sector.

As the rest of the world commits to full decarbonisation by 2030 to 2050, South Africa appears to mostly be asleep, with much talk of liquefied natural gas, hydrogen, nuclear and renewable plans, but little action to support investment. The longer this situation continues, with no major replacement plans for coal plants, the worse the pain is going to be by 2030, as Eskom stares down the barrel of having to keep aging coal plants open, with domestic coal prices enjoying new highs.

Spot prices remain firm, although the back of the curve is weaker as risk is rolled into the future. Momentum continues to subside, setting up nicely bullish conditions for coal producers going forward. This time last year both price and momentum had rapidly collapsed from the fourth quarter of 2019 squeeze, whilst this year conditions have conspired to keep prices firm.

Of course momentum still has a long way to go to reach an oversold level, and the forward curve suggests the loss of several dollars over the next couple of months. However, if one had to hazard a guess for the next floor level, it would be around $70 by July before we perhaps see further cyclical strengthening.

Like all commodities, coal prices are of course also benefitting from a structurally weaker Dollar, even though inflation is not really in sight yet. This trend is an interesting one to watch as confidence in the dollar continues to erode. The US treasury market is now also a key factor to watch in the evolution of most commodity prices going forward.