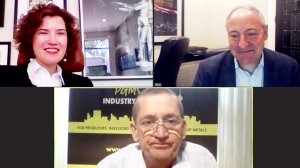 They certainly will if Toronto- and New York-listed Platinum Group Metals (PTM) CEO R Michael Jones has anything to do with it.

Jones’s parting shot to moderator Bernard Swanepoel at the virtual 2020 PGMs Industry Day was this: “If you're a great EV believer, watch out – PGMs can actually move across.”

Jones is not only developing the new greenfield Waterberg PGMs mine in South Africa’s Limpopo province but he is also backing research that centres on lithium oxygen and lithium sulphur batteries performing better with the addition of PGMs, which can increase a battery’s energy density. Waterberg is planned as a bulk mechanised underground palladium, platinum, gold and rhodium operation at a time of serious rhodium shortage and significant palladium demand.

As Mining Weekly reported earlier this year, several patents have been filed with the likelihood of PGMs making the leap to battery chemistry and lithium-ion batteries looking promising.

“Really exciting,” was how Jones described the prospect of EVs and FCEVs potentially having a future PGM link.

But as exciting is what he told presentation chairperson and EY Africa mergers and acquisitions head Sandra du Toit about his $617-million, 1 100-employee Waterberg PGMs mine plans.

Bulk mechanised mining takes place where the geometry allows and in the case of Waterberg this is possible because of its 40-m-high sub levels.

“We’ll essentially be dropping a 13-storey office building with every blast, so it's a completely different form of mining that affords you that extreme productivity.

“Training is a really big issue . . . but, yes, you can take someone with no experience whatsoever and have them be a very productive underground equipment operator and in fact, women do much better at it than men," said Jones.

PTM is working with an international training organisation and has been liaising with technical and vocational education and training (TVET) in South Africa.

“We were working this time yesterday with TVET, working on the cooperation agreement with TVET to put the skills and training into the community college system and use their infrastructure and registration, which they are very excited about,” said Jones.

The raising of project funding is expected to take the balance of this year to assemble, helped by a partnership struck with the Japanese to have a right to the final metal.

“We’ll need a mining right, we’ll need the offtake settled and that will flow into the funding, so it’s going to be a very exciting few months,” he said.

His group has a stalwart shareholder in Franklin Templeton, in California, and in South Africa, a new largest shareholder in Hosken Consolidated Investments (HCI). As reported by Mining Weekly in June, PTM closed a nonbrokered private placement of common shares at a price of $1.40 each, with an aggregate of 1.22-million common shares subscribed for and issued, resulting in gross proceeds of $1.71-million.

HCI, headed by Johnny Copelyn, subscribed through its Deepkloof black empowerment subsidiary. This acquisition brought HCI's total holdings in the common shares of PTM to 31.591%, according to a report in MarketScreener.

It was reported at the time of the private placement that PTM intended using the net proceeds of the placement for its share of costs on the Waterberg project and for general corporate and working capital purposes.