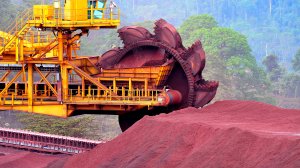 The project, located in the municipality of Canaã dos Carajás, would require $1.5-billion in investments over several years, the miner said in a statement.

The project’s startup is expected in the first half of 2024.

Vale said Serra Sul 120 entailed the opening of new mining areas; the duplication of the long-distance belt conveyor (TCLD), the implementation of new processing lines at the plant and the expansion of storage areas, among other measures.

“The Serra Sul 120 project will create an important buffer of productive capacity, ensuring greater operational flexibility to face eventual production or licensing restrictions in the Northern System,” said the miner.

The $385-million investment to duplicate the existing TCLD would not only provide flexibility, but would also aggregate important elements for the reduction of operational risks, adding reliability to the system.

The project would aim to increase the Northern System's total capacity to 260-million tonnes a year.