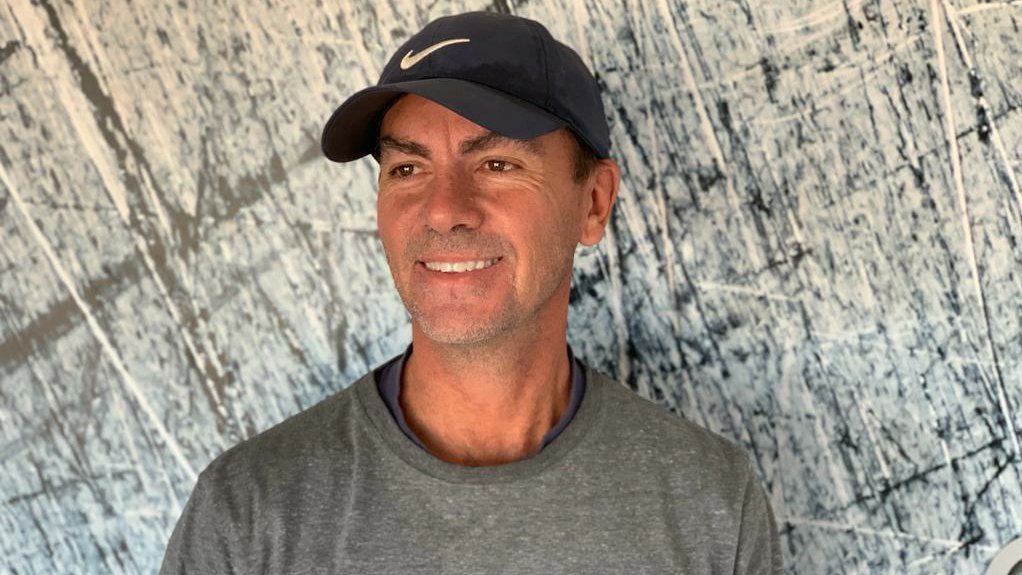 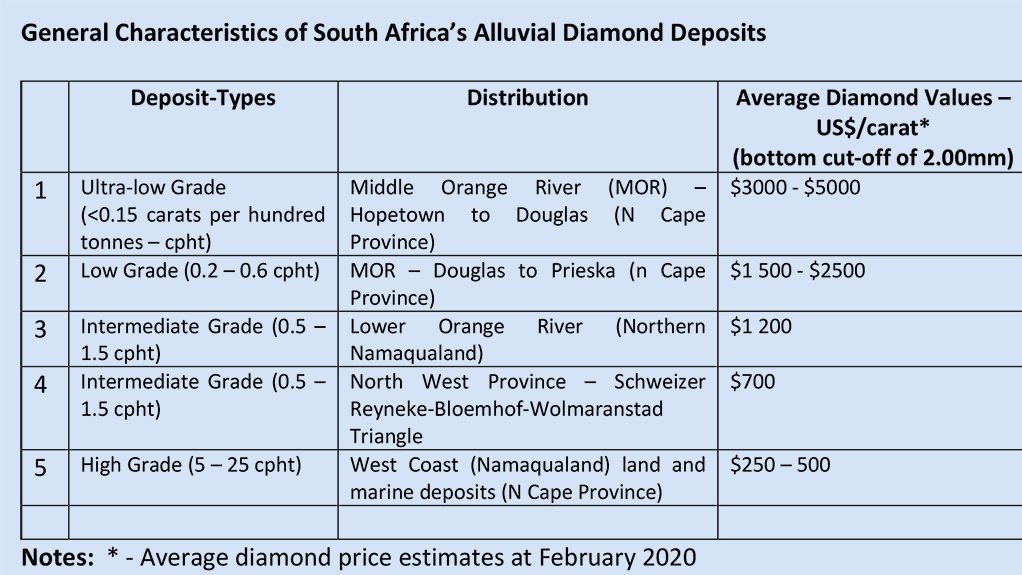 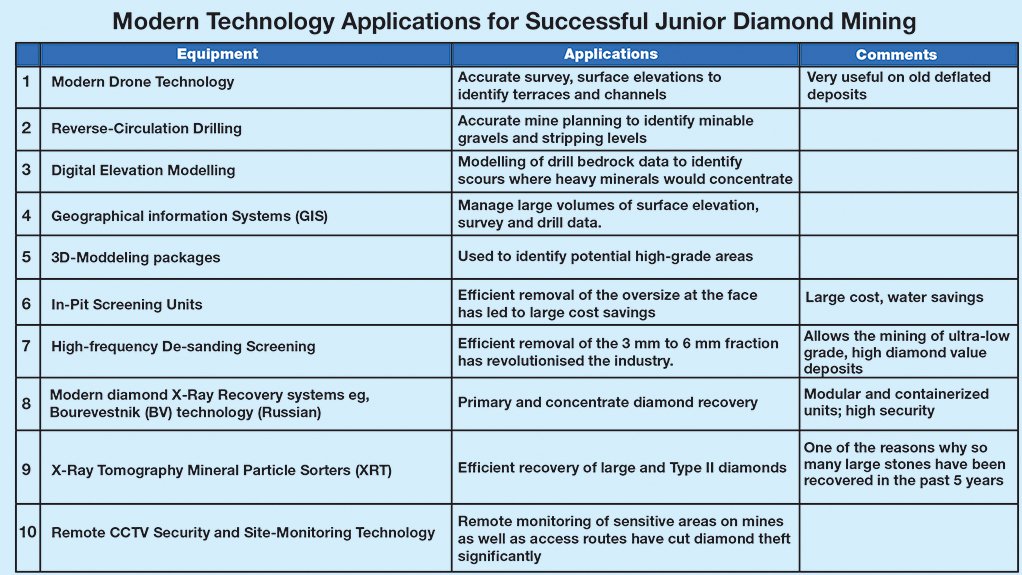 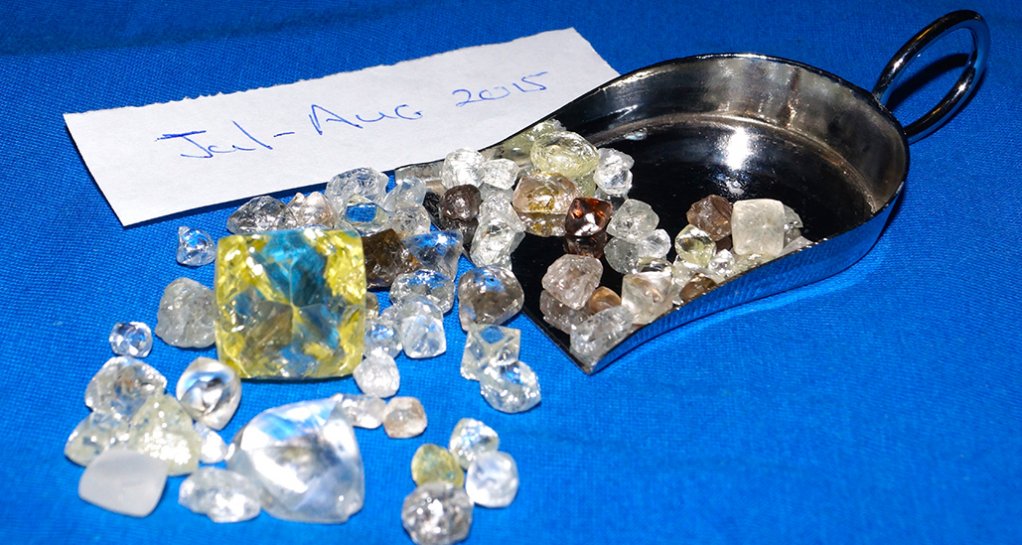 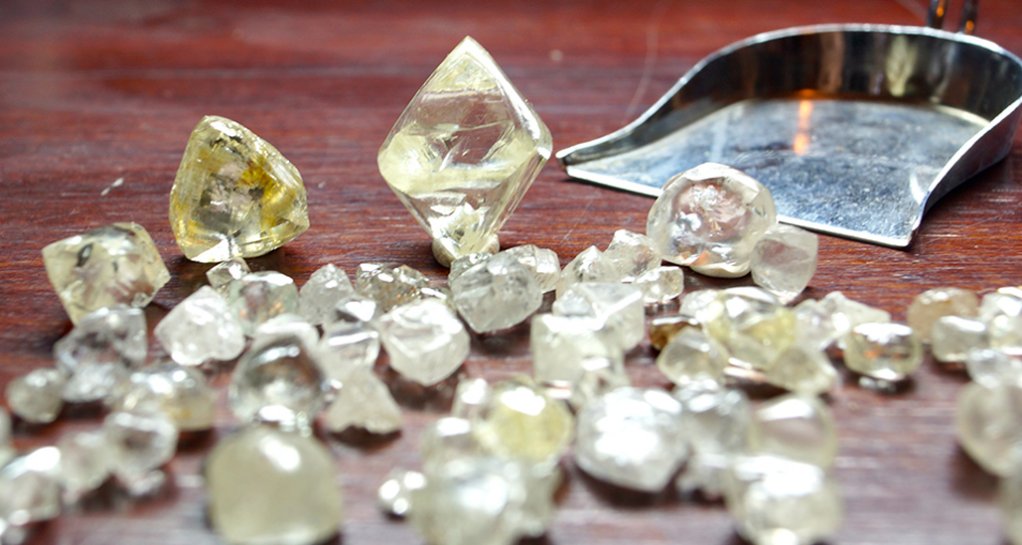 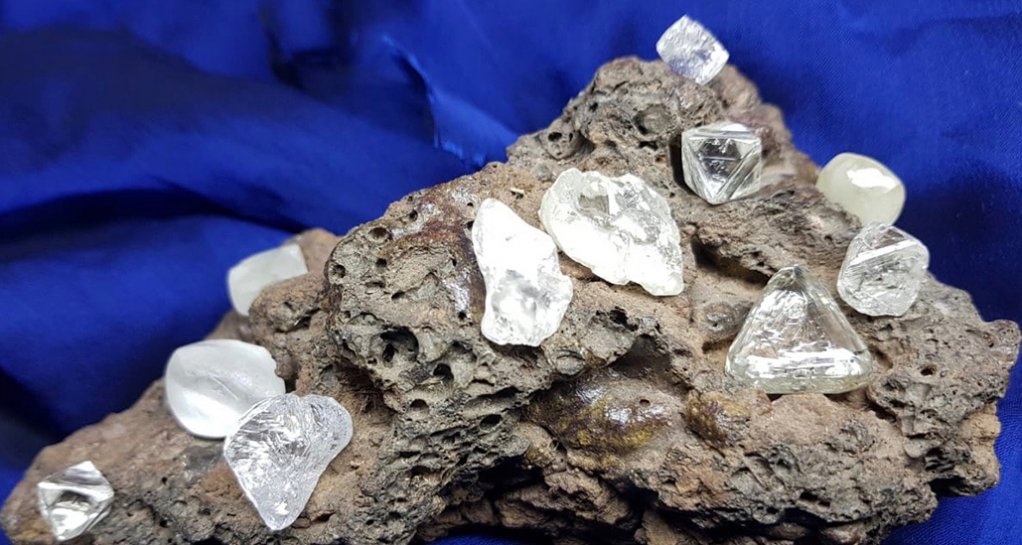 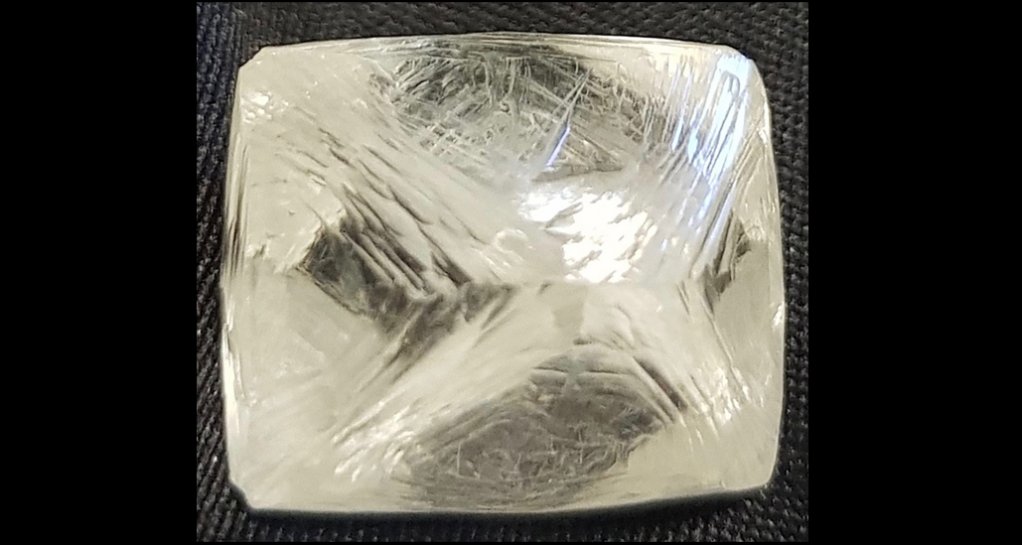 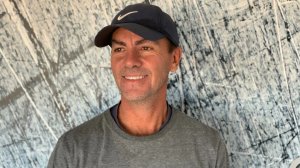 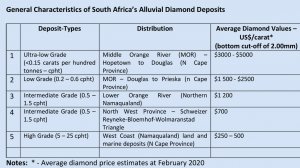 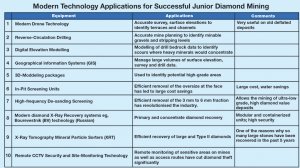 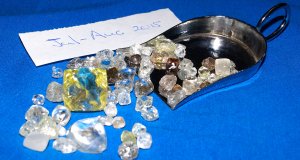 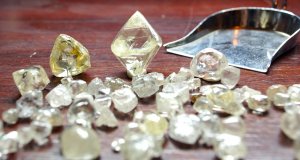 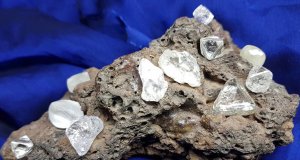 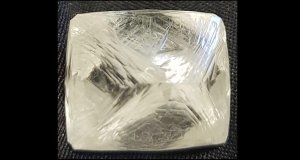 JOHANNESBURG (miningweekly.com) – The discovery of alluvial diamonds in the unique secondary deposits of the Middle Orange River downstream of Hopetown in South Africa in 1867 was the catalyst that initiated the development of the mining industry in Southern Africa.

But compared with its heyday between the 1990s and early 2000s, today’s junior diamond mining sector is but a shadow of its former self, says the South African Diamond Producers Organisation (Sadpo) deputy chairperson Lyndon De Meillon.

Independent studies have shown that the sector has shrunk by 90% over the past 20 years, mainly because of poor legislation and over-regulation.

Now, Sadpo is making an urgent plea to government to allow it to use wonderful new technology to resuscitate itself and simultaneously relieve desperate unemployment in a number of areas where alluvial diamond mining by juniors is struggling intensely. All that is needed is recognition of the unique nature of this mining and the removal of red tape, Mining Weekly can report.

De Meillon, an independent diamond producer, is the owner of Paleostone Mining with two operating alluvial diamond mines. He is a geologist with an honours degree in geology and masters degree in oceanography. He has been in the diamond business for 28 years and assures Mining Weekly that South Africa’s globally unique and exceptional deposits can be successfully exploited with robust geological modelling, experience, low-cost operations, and technology advances. But the red tape must be removed and legislation introduced to open the way for the country’s small and junior mining sector to create wealth and jobs.

These statistics, Sadpo notes, indicate a significant decline in South Africa’s diamond production from 15.8-million carats in 2005, with consequent negative impacts on the economy, foreign earnings, employment and communities in key mining provinces and areas.

Sadpo’s emphasis is that the situation should not be as dire as it has become, given the remaining widespread and voluminous alluvial diamond deposits in Namaqualand, the Northern Cape and the North West province.

These extensive secondary or alluvial diamond deposits were formed through millions of years of weathering and denudation of the southern continent and the dispersal of diamonds from their primary kimberlite sources into streams and rivers, and ultimately to the sea on the West Coast.

This process is accompanied by an increase in average value per carat as poor quality and flawed stones experience progressive attrition and are destroyed over greater distances.

Sadpo estimates that there are only about 200 private companies involved in mining alluvial diamonds and small kimberlites in the North West, northern Free State and Northern Cape regions, along with a few listed junior mining companies. However, most listed companies find it very difficult to survive when mining these ultralow-grade, low-margin deposits, owing to their cost structure, the organisation states in a release to Mining Weekly.

Alluvial diamond deposits can be divided, Sadpo says, into coastal deposits and inland deposits. Diamonds are found along the West Coast of South Africa from the mouth of the Oliphant’s river into northern Namibia. These diamonds were brought to the coast by ancient river systems during the drainage evolution of Southern Africa.

Diamonds found along the coast are characterised by a relatively small size but exceptional quality, owing to the attrition process that they undergo during their journey to the coast.

Alluvial deposits, higher up in the fluvial system – closer to the source kimberlites –  inland, have a larger average stone size.

Sadpo chairperson Gert Van Niekerk notes that South Africa has a unique small-scale and junior diamond sector, developed over a lengthy period of time, with hard-earned experiences, skills and expertise, assisted by innovative geological work, drilling, digital terrain and three-dimensional modelling of drill data, drones and modern diamond processing and recovery techniques, providing a platform for exploitation of these deposits.

The exceptionally low and ultralow grades, and nugget affects, are the key challenges facing this segment and inherently result in some niche deposits that are only capable of providing a short-term life-of-mine (LoM) of between 18 months to three years, compared with some of the more extensive low-grade deposits providing a longer LoM of between three and five years.

De Meillon points out that in South Africa, mineral rights are allocated on the basis of farm boundaries, and given the constrained nature of alluvial deposits – typically confined to ancient river courses –  the industry requires a very efficient permit application system, where applications for prospecting, mining and water rights are processed within 12 months in order to plan to move to the contiguous ore bodies on adjacent properties.

“Regrettably the one-policy-fits-all approach, and the red tape imposed by the various government departments and agencies are particularly disadvantageous to the junior mining sector,”  De Meillon says.

Both Van Niekerk and De Meillon highlight that these mostly remote alluvial diamond mines and operations are crucial to the economies of the small towns in these regions, as unemployment is often in the region of 70%. Towns like Douglas, Prieska, Bloemhof, Wolmaransstad, Schweizer-Reneke, among others, will struggle to survive without this sector, they caution.

Based on current production rates, Sadpo calculates that South Africa still has a large enough resource to sustain diamond mining operations for at least another century.

The main reasons for this are the low and ultralow grades, as well as the ‘nugget effect’ of these deposits, which present challenges in determining long-term profitability and predicting the grade.  Hence, the inability of being able to achieve an indicated-resource or reserve status and, therefore, a ‘bankable’ status, De Meillon says.

However, these deposits can be successfully exploited with robust geological modelling, experience, low-cost operations, and technology advances.

The main stumbling block to the optimal development of the alluvial diamond resources remains the lack of a properly recognised and supported small and junior mining sector in South Africa, with specifically developed legislation.

“If a small aggregate mining company also struggles to comply with legislation designed specifically for large mines and public companies, imagine the difficulties faced by junior diamond operators,” he adds.

But De Meillon highlights that juniors have developed practical tools to delineate, evaluate, and exploit these deposits, despite the hostile legislative environment, because these deposits “yield the world’s most consistently and highest diamond value in respect of dollar per carat values, with large (up to about 300 ct) and internally flawless D-colour stones recovered regularly”.

The scale begins with the letter D, representing colourless, and continues with increasing presence of colour to the letter Z, or light yellow or brown.

In this respect and given the positive role that these operations and mines can play in creating jobs in poor provinces and rural areas, there should be a concerted effort by policymakers to ensure that the legislative and regulatory regimes are revised to create an enabling environment for this sector.

Van Niekerk and DeMeillon further note that a small miners development fund to drive transformation and job creation should be established, and that access to information and technical assistance from the Council of Geoscience and Mintek should be a priority for juniors.

The past 12 months have been tough for most local and international diamond miners.  Although alluvial diamond producers generally produce diamonds at the top end of the quality spectrum, they have not been spared.

De Meillon notes that during recent economically challenging times, and the latest Covid-19 negative impact on the diamond market, even special stones typical of the South African alluvial deposits generally have, see a larger reduction in price compared with smaller quality stones.

“There can be no doubt that the diamond industry and specifically the alluvial diamond mining industry will be in for a rough ride during 2020. The longer-term forecast remains positive, though,” he notes.

South Africa’s alluvial diamonds are “world famous” for the “special“ stones they produce. For example, certain sections of the Orange river having the highest average value per carat compared to any other deposit in the world.

In the section of the Orange river between Hopetown and Prieska, average values of $2 500/ct are common with certain deposits averaging double this and more. However, these high value deposits can at best be described as ultralow grade.

Along the middle Orange river grades typically vary between 0.1 carats per hundred tonnes (cpht) and 0.3 cpht. This, coupled with the unpredictability of the grade, ensures that these deposits are best suited to for small and junior mining entrepreneurs with an above average appetite for risk.

Grades in other areas like the North West province are significantly higher, but the average diamond values are again much lower, adds Sadpo.

USE OF INNOVATIVE TECHNOLOGIES

Technological advances over the past 20 years and the strength of the dollar have progressively changed the economic parameters resulting in many previously unprofitable deposits being mined.

Over time, operators began to understand their diamond size and value distribution much better. In the Northern Cape, along the Vaal, Orange and Riet river deposits, this led to an increase in the bottom cut-off size as in general, 80% of the value is represented by the +2 ct fraction.

Most operators now de-sand their plant feed at 4 mm to 6 mm bottom cut-off. The associated screening technologies to remove this fraction have seen huge improvements.

Sadpo adds that as the -6 mm fraction historically represented 30% to 40% of the plant feed volume, a much higher value feed is now presented to the plant, which has downstream spin-offs other than economies of scale.

Slimes dams are now a fraction of their previous size and water consumption can also be cut by as much as 75%. As the sand fraction is removed dry during the screening process, it can immediately be used for rehabilitation. The mining footprint of these operations can be kept a lot smaller as rehabilitation takes place much quicker.

De Meillon, who has done considerable regional and detailed investigation of these deposits, notes that most operators employ the latest diamond recovery technologies in their operations.

Bulk X-ray units have made diamond recovery more efficient, and the high-tech, containerised recovery systems and closed-circuit camera systems can be observed and managed remotely. They have also assisted in limiting product theft and shrinkage.

In respect of the future of this sector, Van Niekerk highlights that Sadpo has in recent years played a key role in building up a membership of small and junior diamond miners so as to provide a platform to help sustain and redevelop the sector. In doing so, Sadpo has also made considerable efforts and has implemented interventions to highlight necessary legislative challenges, and reduce excessive bureaucracy, so as to sustain and grow this key sector and drive transformation.