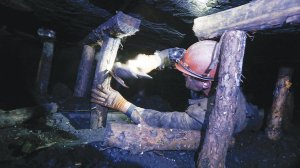 A mineworker toils inside the Novovolynska-9 coal mine, which is the focal point of a Ukrainian police investigation into a coal deal that some anticorruption campaigners say resulted in mineworkers not being paid salaries while unnamed officials allegedly lined their pockets. State-run coal company Volynvuhillia reportedly ordered the Novovolynska-9 mine, in Novovolynsk, north-western Ukraine, which it oversees, to sell coal below the minimum price to a private company, in spite of trade union protestation. Police are now probing the nonpayment of $220 000 in salaries and a coal-washing payment arrangement.