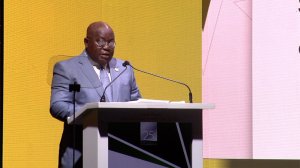 Ghana President Nana Akufo-Addo tells mining companies what they can expect when investing in Ghana. Video and editing: Nicholas Boyd.

CAPE TOWN (miningweekly.com) ­– It is time for Africa to make itself and its people prosperous by making use of mineral resources and modern technology to create a new world shorn of greed and cupidity, Ghana President Nana Akufo-Addo said on Tuesday.

In an opening address on the second day of the Investing in African Mining Indaba, Akufo-Addo decried the pursuit of mineral riches in a manner that degraded the land and rivers and gave rise to blood diamonds.

Under such circumstances, it was little wonder, he said, that some described mineral resources as a curse, while in reality, mining had been an important undertaking throughout the history of humankind.

He urged that rich mining areas cease being inhabited by poor communities and spoke of wealth-sharing being handicapped in the past by the big mining process and corrupt representatives of the people.

Currently, however, there was far more commitment to the rule of law.

“My belief is that we’ve come of age and mining companies should not expect to make extraordinary profits at our expense,” said Akufo-Addo, who expressed the desire to work with mining companies in Ghana under the normal conditions that pertain in the rest of the world.

He said that smart lawyers, accountants and engineers were needed to strike fair deals, while governments ensured that mining codes protected the environment, benefited communities and ensured that the land was rehabilitated after mining had ceased.

Negotiations about resources needed to be done transparently and in a language that did not require an expert to interpret.

Governments and mining companies needed to work hard to gain the trust of communities and put a stop to the illicit outflows from the continent of billions of dollars a year.

These significant proceeds should instead be used to grow Africa’s minerals sector and turn it into the champion of economic growth, which would not happen if Africa’s minerals continued to be exported raw and processed outside of the continent.

Mining in Ghana had been financed by foreign stock exchanges and had created significant wealth for offshore investors.

He drew applause when he said that Ghana was now incentivising investors to list in Ghana and take advantage of what is a mature and stable mining investment destination.

Akufo-Addo decried illegal mining as “the dark side of mining” and something that had been a major problem in Ghana, where it was being carried out on a large scale with sophisticated equipment provided by foreign controlled criminal syndicates.

Ghana’s imposition of a two-year ban on small-scale mining was sanitising the sector and protecting the environment to such an extent that fish were returning to rivers that were previously polluted by illegal mining.

Akufo-Addo said the Obuasi gold mine owned by AngloGold Ashsanti had made people outside the country very rich, but questioned why Obuasi did not look like a place where so much money had been made.

“It is my hope that this time around, the development of Obuasi will reflect the wealth its soil produces,” the president said of the mine’s reopening.

He questioned why communities were so poor and said, “we must move to change the situation”.

“I’m certain that a lot more can be done to transform the communities if government and mining companies collaborate,” he added.

He revealed that Ghana had taken the decision to exploit its bauxite, had established a public aluminium corporation covering the full value chain of the country’s bauxite resources and was looking to do the same in iron-ore.

Lithium, which is being used in the world’s emerging green economy, is also present in commercial quantities in Ghana, he said.

“We hope to establish an equitable balance between our needs and the needs of the investor community to produce a win-win for all stakeholders,” he said, adding that Africa had made the world rich and it was now time to make Africa prosperous and to enable its people to attain a decent standard of living.

“The people of Africa do not have to be poor for others to be rich,” he said, adding that technology had made it possible to reinforce prosperity for all the people of the world.