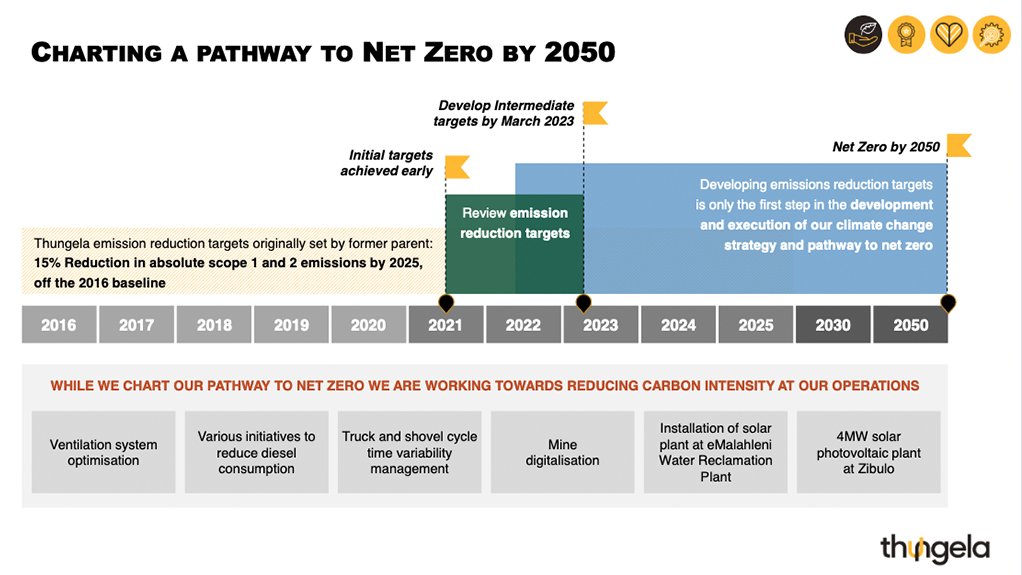 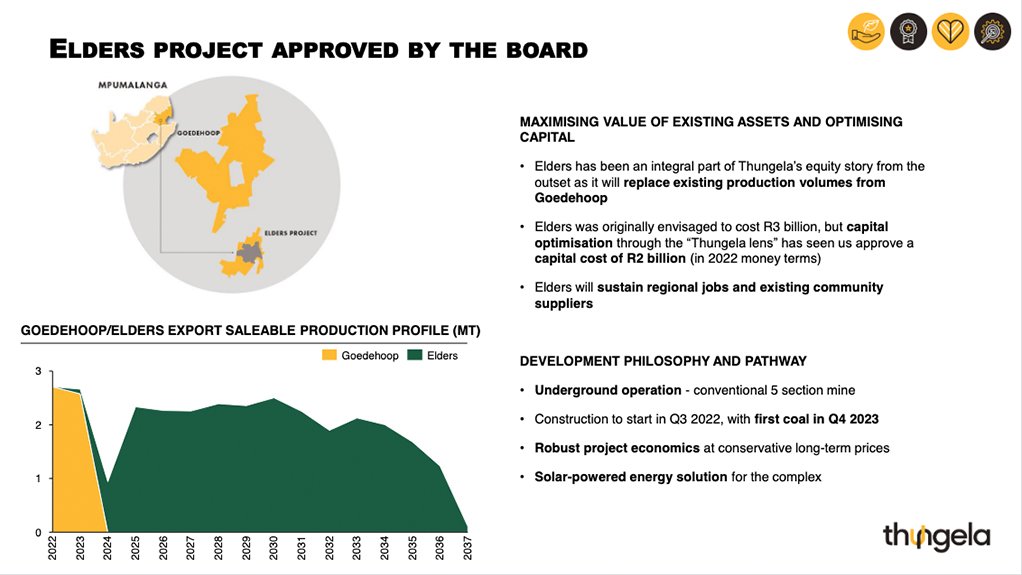 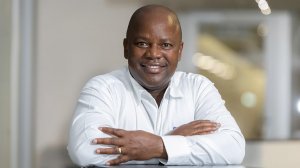 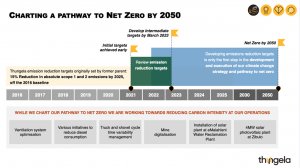 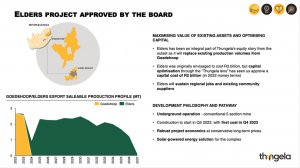 JOHANNESBURG (miningweekly.com) – Coal mining and exporting company Thungela, which generated R8.9-billion free cash in the first six months to June 30, is sharing R500-million of it with employees and communities, is setting out to plant a million trees to purify water, is putting in solar power to reduce its carbon footprint as it charts a pathway to net zero, has introduced a programme to uplift small enterprises, is opening a new replacement colliery, and is going out of its way to ensure that Mpumalanga is not left behind when the province transitions out of coal.

Taking into account the latest interim dividend as well as the R137-million Thungela distributed earlier this year, every one of the company’s 4 500 qualifying employees will get about R100 000 each while the community trust works on how to best use the nigh-R400-million contributed to it to ensure that the trust outlives the mines.

Twenty thousand trees have already been planted, of a kind that are able to lock up the sulphates and heavy minerals in the mine contaminated water so that cleaner water can be discharged.

A 4 MW solar photovoltaic plant is going up at Thungela’s Zibulo mine and the upcoming Elders mine, a replacement mine, will be solar powered as well.

The Department of Water and Sanitation (DWS) has approved its remediation plan to restore the river system that was polluted by a spill into the Kromdraaispruit and Wilge river, and the former Kleinkopje mine is being held up as an example of how mine land can be returned to sustainable use.

Seen as encouraging by the company are recognition by the Intergovernmental Panel on Climate Change (IPCC) that carbon removal technologies, such as carbon capture, storage and use (CCSU), will have to play a role in helping to meet global climate change mitigation targets, as well as the work being done by the US’Environmental Protection Agency (EPA) to find more uses for carbon dioxide (CO2) once it has been captured.

These and many more points were made by Thungela CEO July Ndlovu in a Teams interview with Mining Weekly. (Also watch attached Creamer Media video.)

Mining Weekly: How is the R500-million being distributed to workers and community members?

There are two trusts, and each one is going to get R250-million. The Employee Partnership Plan involves roughly 4 500 qualifying employees, and if you take what we distributed in respect of 2021, and this dividend, it equates to roughly R100 000 per qualifying employee. The other trust, the Nkulo Community Partnership Trust, has got its own rules, and they are working on how to use almost R400-million made in the first year to begin to build a trust that can outlive the life of our mines.

What is your new Thuthukani programme doing to uplift enterprises in Mpumalanga?

Thuthukani is another intervention that we have put in place to ensure that we not only incubate small- to medium enterprises, but also give them the skills, as well as access to lending, because that is usually one of the more difficult things. Over and above that, we want to ensure that they've got access to opportunities. That’s what that incubation and supply development programme is meant to do.

What is Thungela doing to improve the environment under its ESG commitments?

We said we will, in the first instance, think broader in terms of ESG, beyond what everyone usually does, which is talk to a subset of ‘E’, which is only the emissions rather than the environment. We think about it holistically. Having said that, strategically we have also said that we want to spike on the ‘S’ - our employees, communities, and the small-to-medium enterprises in the areas where we operate. Equally, spiking on ‘S’ talks to what I spoke to first in our results, which is our commitment to run a fatality-free business, and I'm pleased with the progress that we're making. Then, if you go back to the ‘E’, what we have said is that we’re developing our climate change strategy, because we want to chart a pathway to net zero by 2050. We quantify that by saying we'll do that to meet the requirements of the countries within which we operate and the markets we serve. That is to recognise that we are a developing country company, and we serve markets in the developing countries, which are dependent on coal. Internally, we've started the baselining. We are reviewing and finding opportunities to reduce our carbon footprint. We are putting up a solar plant at our Zibulo mine and we have also made a commitment that the Elders project complex will be powered with solar, in an effort to mitigate impacts from an ‘E’ point of view. We're doing some other absolutely excellent work from an environmental point of view as well. We’re trialling technologies such as phytoremediation and we’ve set a target to plant trees. We've already planted 20 000 trees. We are on track to meet the stretch target that we have set for ourselves to plant a million trees. These trees have a scientific function to obstruct contaminated water, lock up the sulphates and heavy minerals, and therefore we can discharge cleaner water into the environment. We’re trialling passive treatment technologies that can ensure far more sustainable solutions in the coal basin.

Would Thungela not benefit financially if it generated its own renewable energy across all operations, given that many mining companies are doing this as a business case?

We evaluate this both from a business case point of view but also from an ESG point of view, and that's why it's both Zibula and Elders that are being solar powered. We'll continue to look for opportunities to reduce our own carbon footprint and where it makes sense, we’ll do it.

A lot of these terms mean different things to different people. You did notice that the way I’ve just described our ESG strategy is probably the best example of what a just transition is all about, isn't it? What you want to do is to ensure that the people who are most affected by your activities and mines don't get left behind. The reason why we set up the Nkulo trust is to make sure that we give it a foundation, so that the people in Mpumalanga are not left behind as a result of transitioning out of coal. Sometimes just transition advocates forget that to be able to do that, you’ve got to continue to supply secure and affordable energy as you begin to transition. That is where companies such as Thungela – which has got high-quality coals that can be supplied to markets that will produce the critical raw materials we all require to deploy renewable energies – come into play. I believe that coal has a critical role to play in the just transition debate. We all just have to be sensible about it.

What progress has Thungela made to restore the river system that was polluted by the spill into the Kromdraaispruit and Wilge river on February 14?

I’m glad to share with you that we developed a remediation plan that the regulator at the DWS has now approved. We are collaborating with experts, and one expert in particular that excites us is the Mpumalanga Tourism and Parks Board. They are experts in restoring aquatic life in river systems, in particular the Olifants river system, which was impacted in this instance. The piece of work we are doing right now is what we call baselining and what this baselining is doing is identifying the species we need to bring in, and the programme that the team has put together has given me so much more confidence. When we stood up and said we would do what is right to restore that ecosystem to what it was before the spill, I now know that scientifically it is possible and we're going to do it.

Do your rehabilitation obligations involve returning the land to what it was before mining began on it?

What can you report on the prospect of coal miners helping to protect the planet by ensuring that carbon capture, storage and use, or CCSU, takes place?

I was quite encouraged last week when Saudi Aramco, the largest oil producer, announced that they are starting to build what will be the world's largest carbon capture and storage facility. Every week, every month, we’re getting more and more of these kinds of facilities being announced. These are beginning to move out of proof-of-concept installations into commercial, reliable installations. I think we're going to see more and more of these. What is more encouraging is recognition by the IPCC that without carbon removal technologies, of which CCSU is one, it will not be possible for the world to achieve their climate mitigation goal.

Can you give more on the U in CCSU?

The US government, through the EPA, have set up a group that is beginning to work, with significant research funding, on the uses of CO2 once it's been captured. If you go to the Shell oilfields in the US, it is captured and used for fracking purposes. We need different uses that capture it more permanently and we're beginning to see more investment in that direction.