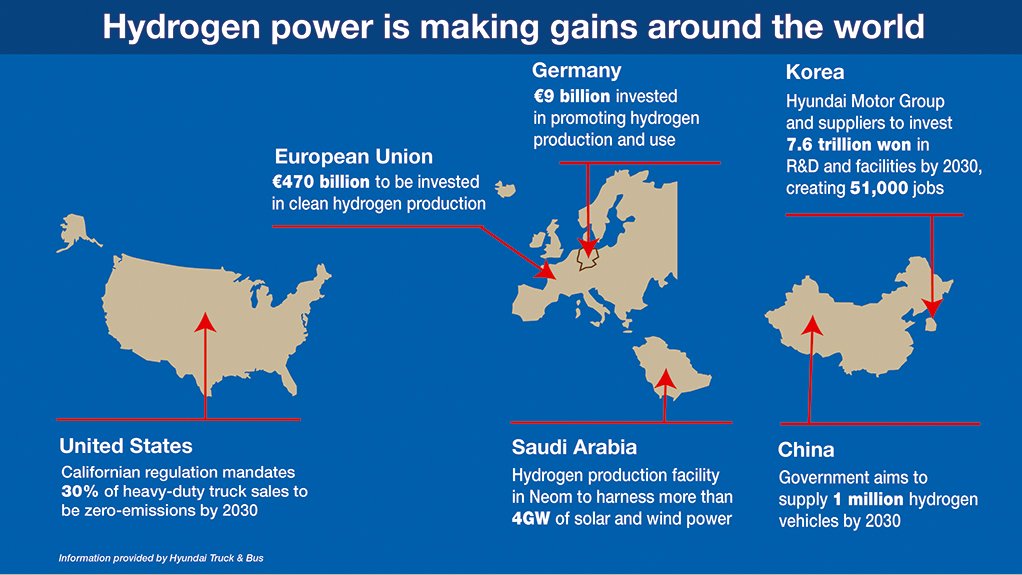 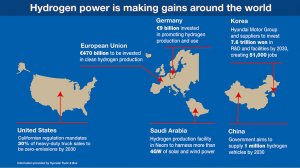 While South Africa’s amazing platinum group metals (PGMs) continue their decades-long task of cleaning the air of the world’s cities in the autocatalytic convertors of vehicle exhausts, their elevation to an even higher zero-emission role inside fuel cells and green hydrogen electrolysers has begun.

At the same time, virtually every major global investor has been mandated to direct investments towards making the world a ‘greener’ place.

The “tide in the affairs of men which, taken at the flood, leads on to fortune” is now for South Africa and its PGMs – and the global lockdown period provides an ideal opportunity for South Africa Inc to engage in virtual interfaces across the world to promote the country as a key global partner in making the world a ‘greener’ place.

Plans to increase the production of ‘green’ hydrogen fuel, which platinum and iridium can be deployed to electrolyse, are set to provide the green hydrogen energy for not only transportation but also general industry, commerce and day-to-day life.

Platinum-catalysed hydrogen fuel cell electric vehicles are being repositioned to the front of the class because they generate zero emission, which is being demanded the world over.

Fuel cell trucks are scheduled to be doing considerable long-haulage in Switzerland by 2025. As reported by Mining Weekly earlier this month, private sector companies are stepping up to the plate to provide fuelling infrastructure, with North American company PowerTap Hydrogen announcing that it will be building a minimum of 500 hydrogen fuelling stations for mainly trucks in the next three to five years.

Two of the top-five technologies that Lux Research of Boston, US, on Tuesday urged energy leaders to look to in 2021 are ‘green’ hydrogen and fuel cells. “Companies no longer have the luxury of time, as climate policies continue to put pressure on the major industry players to mitigate their contributions to emissions and eventually shift toward carbon-neutral operations,” Lux director of research Yuan-Sheng Yu states in a media release to Mining Weekly.

On ‘green’ hydrogen, Lux states that as the energy system transitions to renewables, ‘green’ hydrogen plays a key role in creating a new global bulk energy carrier and can serve as both an energy and feedstock source for industrial processes.

On fuel cells, Lux states that hand-in-hand with ‘green’ hydrogen, fuel cells enable the adoption of zero-carbon energy across the energy system and can eliminate emissions in hard-to-decarbonise sectors like long-haul trucking.

As reiterated by Columbia University Earth Institute staff blogger Renee Cho, US President-elect Joe Biden has promised the renewable energy that will be required to produce ‘green’ hydrogen at a cost below that of natural gas. Cho's State of the Planet report adds that the US Department of Energy is investing $100-million into the research and development of hydrogen and fuel cells, and that the European Union will have invested $430-billion in green hydrogen by 2030, to help achieve the goals of its Green Deal.

China’s next five-year plan for economic development, for the years 2021 to 2025, is due to be unveiled in March. The plan – China’s fourteenth – is expected to flesh out how carbon neutrality will be achieved by 2060, a goal that was announced in the latter part of last year.

Parallel with setting its climate change target during 2020, China, the World Platinum Investment Council reports, has launched fresh policies to support its growing market for hydrogen fuel cell electric vehicles (FCEVs), which use platinum as a catalyst. Although China has provided subsidies for FCEVs since 2013, these latest initiatives are aimed at developing the sector further, by supporting projects that develop the entire FCEV supply chain, including refuelling infrastructure, rather than offering subsidies on sales. The government wants to see cumulative sales of FCEVs reach one-million vehicles by 2035.

Delft University of Technology future energy systems professor Ad van Wijk states in the publication Brink that the future of hydrogen is as an energy carrier. “It's about ten times cheaper to transport energy by a hydrogen pipeline than by an electric cable. That makes it possible to transport electricity very cheaply from somewhere like North Africa to the demand centres in Europe, for example,” Van Wijk is quoted as saying. Hydrogen is a modular technology, he notes, with no rotating parts and no high temperatures, and thus promises to be cheaper than combustion technology.

Van Wijk describes fuel cell technology as being the reverse process of electrolysis. “You could say that fuel cells and electrolysers do opposite things. They are more or less the same technology — the only thing is, you reverse the process.

“Fuel cells have a lot of promise for mobility because you don’t have any tailpipe emissions, and they offer much higher efficiency than combustion technologies. Also, with hydrogen you can fuel your car in four or five minutes, the same as diesel or gasoline engines.

“That's why car manufacturers are developing fuel cell technology for their larger cars — and especially for buses and trucks. Once this is done on a mass scale, the cost of these fuel cells will come down to about $30/kW to $50/kW,” Van Wijk is quoted as saying. He projects a scenario of fuel cells starting to replace diesel engines in five to ten years.

Hydrogen Fuel News reports that environmentalists and engineers are looking to the potential of hydrogen for global air travel. As the global airline industry looks to cut its carbon emissions, the publication states that many are turning their attention toward hydrogen fuel technology for reduced or zero-emission flights. Air travel is estimated to be responsible for up to 3% of all greenhouse gas emissions in the US and the publication says that researchers have been working to develop the hydrogen fuel technology necessary for mainstream passenger and cargo flights.

“This isn’t just a fringe effort. Major players in the airline industry are investigating the way this tech and renewable energy can be applied for future air travel. For instance, earlier this year, Airbus announced that it would be focusing on three concept planes. Each of those planes would be powered by hydrogen. The purpose is to discover a design and manufacturing for an aircraft so a hydrogen-powered plane would be able to start commercial service by 2035,” it states.

The Financial Post reports that Quebec and Alberta are leveraging their respective strengths to emerge as hydrogen hubs. It states that utility provider Hydro-Québec is aiming to position its home province as the ideal location to produce ‘green’ hydrogen, capitalising on its abundant hydroelectricity, while its Alberta counterpart has identified the export of ‘blue’ hydrogen products as one of the key planks of its diversification strategy.

Hundreds of homes in Fife, Scotland, are becoming the first in the world to use 100% ‘green’ hydrogen to heat their properties and cook their meals and the Hydrogen Council reports that more than 650 homes in Winlaton, near Newcastle, in England, will become the first on the UK’s public gas grid to be heated partially by hydrogen, as part of a project aimed at helping the UK to reach its 2050 net-zero emissions target.

As a consortium of parties look to demonstrate a zero-emission train at the COP26 Climate Summit in Glasgow in November, Scotland could soon see its very first hydrogen powered train, and Reuters reports that developers across the world are testing the use of hydrogen to power ships as the maritime industry races to find technologies to cut emissions. To reach goals for the shipping industry set by the United Nations, industry leaders say ships powered by green hydrogen could help meet the target the first carbon-neutral vessels entering the global fleet by 2030.

In South Africa, where a Hydrogen Society Roadmap is being drawn up, President Cyril Ramaphosa spoke in his State of the Nation Address in June 2019 of the need to explore the potential of the hydrogen economy and again, in his January 8 Statement 2021, to mark the 109th year of the establishment of the ANC, he said there is a need not only to build back better post-Covid, but also to build forward differently. On both occasions, he addressed the need for a significant proportion of new electricity generation to be from renewable sources.