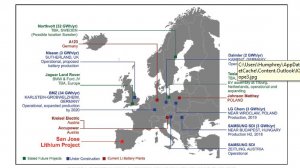 Photo by Plymouth Minerals
Several 'gigafactories' are planned or under construction in Europe.

The company, which is developing the San Jose lithium/tin deposit in regional Spain, says Europe is positioning itself to be a leader in lithium-ion vehicle manufacture and use, citing the French government’s announcement last week that it would outlaw the sale of all petrol and diesel vehicles by 2040. Vehicle manufacturer Volvo also announced recently that it would offer electric options on its entire vehicle fleet by 2019.

Further, multiple ‘gigafactories’ are under construction or in the approvals process in Europe. German vehicle manufacturer Daimler, for instance, is investing over $750-million in battery plant to service growing demand for its own fleet.

Plymouth MD Adrian Byass said on Tuesday the company believed the San Jose project would benefit greatly from the “accelerating and undeniable” changes witnessed in the lithium market.

“Every week brings a new and exponential change in demand driven by industry of legislative changes. The companies well placed in the supply chain will be those with quality, advanced projects. We believe San Jose is exactly what is required,” he said in a statement.

The San Jose project is expected to fulfil lithium input requirements for some of the ‘gigafactories’ in Europe.  Plymouth included a map in its statement on Tuesday, indicating that at least 13 factories are on the cards for Europe, six of which are already in construction.

Plymouth has defined a Joint Ore Reserves Committee-compliant resource of more than 1.3-million tonnes of lithium carbonate equivalent and is currently drilling at San Jose to expand the deposit.

The company has partnered with Spanish construction and engineering group Valoriza Minera and will submit a mining licence application for the project by late October. This document will cover the economic, engineering, environmental and social-impact parameters for developing the San Jose mining project and the production of battery-grade lithium carbonate. Tin will be produced as a byproduct.