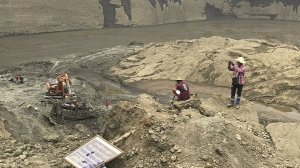 A scene at the Hpakant area of Kachin state, in the north of Myanmar, where a mine mudlside buried 54 miners in April. The mud flowed down from a collapsed tailings dam. Hpakant, 950 km north of Yangon, is noted for jade mining, which contributes significantly to the gross domestic product of the country, formerly known as Burma. Myanmar is the source of much of the world’s supply of high-quality jadeite, but the industry that mines it is plagued by corruption and poor regulation. Global Witness put the value of Myanmar’s jade production at $31-billion in 2014 – the last year of available statistics. In the previous decade, the environmental advocacy group estimated that Myanmar’s jade production was worth up to $122-billion. Many of the jade stones are reportedly also smuggled across the border into neighbouring China.