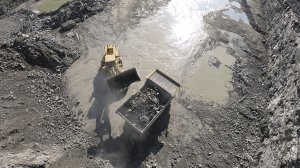 An upturn of between 12% and 15% in volumetric capacity on its haul truck has been noted, allowing for a significant reduction in spillages and product losses.

The tailgate is a vertical floor extension that is designed to cap off the rear of a truck body while not causing an obstruction when the material starts to flow from the truck body.

After an extensive research period, Caldwell Stone, based in Kentucky, placed an order for a customised tailgate with PHIL to suit its transport needs. The tailgate was manufactured, delivered and installed in December last year.

This brings Caldwell Stones’ tailgate tally to two – one is installed on a CAT 769D rock truck, and the newest on a Volvo A40D articulated dump truck.

Caldwell Stone VP Clay Albright tells Mining Weekly that the site staff is pleased with the increased hauling capacity and results that the tailgate has provided.

Caldwell Stone was founded in the 1920s by Albright’s grandfather and, within a short time, a block plant, ready-mix plant and asphalt plant were established close to the quarry. The three plants rely on Caldwell for raw material.

When Caldwell Stone directly dumps aggregate at the concrete plant, the trucks deliver as much as 500 t of material in an eight- hour day. This means that a delivery of 500 t would amount to between 16 and 18 trips of 30 t at a time. With a tailgate, the company can fill its 35-t trucks to capacity and deliver the same amount in three to five fewer loads, which means reduced fuel consumption, less wear on the trucks and tyres, and fewer risks while crossing a public highway.

Albright also refers to the danger – and cleanup expense – of aggregates spilling onto a public road, which could result in penalties imposed by state and local authorities.

“With the years of reliability we’ve had with our other PHIL tailgate, this one should pay for itself quickly and add up to greater profits for us over its life span. Based on the numbers, we’re expecting return on investment in fewer than two weeks,” says Albright.

Albright speculates that the potential revenue boost with tailgates would be exponential for a quarry with high-capacity on-site processing plants. For example, if the scenario above were to continue over the course of a shift, one truck could deliver 175 t more in an eight-hour workday. Assuming an average aggregate cost of $10 a ton, one truck could deliver about $1 750 more material every day, $8 750 more a week and as much as $430 000 more a year.

“As a custom-solutions equipment manufacturer, PHIL chooses to work directly with clients worldwide to ensure that our products fit their equipment,” concludes Swank.