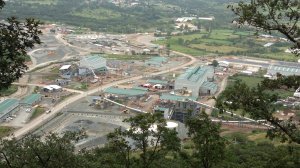 VANCOUVER (miningweekly.com) – Precious metals producer Tahoe Resources has recorded an $18-million loss for the fourth quarter ended December 31, as its flagship Escobal silver mine, in Guatemala, lingers on care and maintenance.

The company talked up the rising importance of its gold portfolio, as Escobal – the world's third largest silver producer – remains closed because of a mining licence dispute.

As a result of the legal impasse in Guatemala, Tahoe did not produce any silver in the fourth quarter, resulting in full-year output dropping 54% over 2016 silver production.

Tahoe did not provide 2018 silver production guidance because of the ongoing Escobal shutdown, but expects full-year gold output ranging between 400 000 oz and 475 000 oz, down 25 000 oz from the initial guidance provided in January 2017.

HOSTILE ENVIRONMENT
UK-based media outlet, The Daily Mail, reported last week that British national and Tahoe VP and MD of subsidiary Minera San Rafael, David Howe, was held hostage for about three hours by an armed gang, before being rescued by police.

The hostile investment environment in Guatemala has recently prompted a bipartisan letter from US Congress chairperson of the subcommittee on the House Western Hemisphere Committee on Foreign Affairs, Col Paul Cook and ranking member Albio Sires, urging the Guatemalan government and President Jimmy Morales to take immediate action to improve these conditions.

The US is the largest foreign investor in Guatemala – in 2016 alone, American companies invested $14.6-billion in the country. This capital is critical to addressing key challenges facing Guatemala, which include corruption, emigration, drug trafficking and associated violence. Improving these challenges is critical to American, Canadian and Guatemalan interests alike.

In the letter, Morales is urged to do more to improve the country's investment climate, stamp out corruption and render more timeous Ministerial permit approvals and Constitutional Court rulings, in order to attract more foreign investment. It is indeed because of the Guatemala Constitutional Court's delay in rendering a timeous decision on the Escobal case that Tahoe's operations suffer.

"We remain optimistic that, based on legal precedent, the Guatemalan Constitutional Court will issue a favourable ruling, reinstating the Escobal mining licence," Tahoe president and CEO Ron Clayton said in conference call.

Escobal is Guatemala's largest mine and has contributed more than $1.7-billion to the economy, including more than $10-million on social welfare programmes.