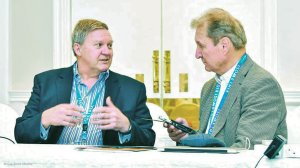 The South African Mineral Reporting Codes (Samcodes), which protect investors, are currently so highly regarded that in October South Africa will host a large delegation from China, which will be visiting the country to learn about the codes as well as the role played by the Johannesburg Securities Exchange (JSE). This follows hot on the heels of South Africa being instrumental in helping Kazakhstan to develop its own new code.

The codes provide minimum standards for the public reporting of mineral-related issues, with governance effected through membership of professional bodies, statutory registration of earth scientists and engineers and the JSE reader’s panel. Underpinning their governance are competent persons and competent valuators reports, which form a bulwark against incorrect valuations and ensure that a resource and a reserve is the same in South Africa as it is in Australia, Canada or in any of the dozen countries that comply with the template of the Committee for Mineral Reserves International Reporting Standards (Crirsco), of which South Africa is a founder member and which is currently chaired by South African Ken Lomberg, the second South African to lead the organisation after Roger Dixon.

“What the codes provide is a common language,” said Mullins, who with Dixon, attended the initial 1994 launch at Sun City.

How is all this funded?

“We’re funded entirely through the two patrons of Samcodes, which are the Southern African Institute of Mining and Metallurgy and the Geological Society of South Africa. We value our independence in the industry, so we do not  look for funding from individual companies. Some of our funding comes from the income we generate through training. Increasingly, as we work on further promotion and further education, cost is beginning to become an issue,” said Mullins.

Commenting on the hype around the recent discoveries of conglomerate gold in the Pilbara region, in Western Australia, and the premature suggestions that a Witwatersrand-type goldfield was at play, Mullins told Mining Weekly Online: “They have tried to put pressure on the codes to modify the codes, but Jorc, for example, has resisted that pressure.”

Do the codes have the capacity to prevent a second Bre-X-type scam of the 90s, which saw a group of companies in Canada falsely report an enormous gold deposit in Indonesia that sent the stock price soaring in 1996, only to collapse to nothing a year later?

“Fraud is often perpetrated by very smart people who know the codes backwards,” said Mullins, making it too hard to say whether the codes could prevent another Bre-X. But there is no doubt that the insistence of the Crirsco international reporting template on materiality, transparency, competency and responsibility provides far-reaching investor safeguards.