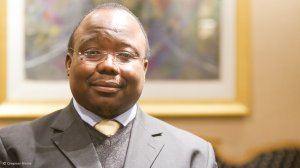 JOHANNESBURG (miningweekly.com) – South Africans have been urged to rally around exploration as this country's Big Hairy Audacious Goal – a BHAG – so that what is described as "our lowest hanging economic fruit" can be turned to positive account.

Council for Geoscience CEO Mosa Mabuza, who was speaking in support of the junior mining sector during a webinar presented by Minerals Council South Africa’s Junior and Emerging Miners Desk, said: “We’ve been given a very important task. In fact, Parliament has set a BHAG for us.” (Also watch attached Creamer Media video.)

Pronounced ‘bee hag’, Mabuza recalled how the BHAG banner had in years gone by been waved with vigour by former De Beers Group MD Gary Ralfe, on his way to successfully implementing some of the most far-reaching advances of the then South Africa-centred global diamond business.

Another massive national BHAG rally is required once again, he emphasised, to attract “in the short term” a minimum of 5% of global exploration expenditure a year.

Urgently needed, he harangued, was for "all stakeholders to have their hands on deck, so that we can, as a nation, work towards obtaining the desirable outcomes", for what he regards as South Africa's lowest hanging economic fruit.

“We have a very rich mining history,” referring to the number of multinational mining corporations that have been founded and built in South Africa before becoming “truly global”.

“They started here, and it’s possible to have them again,” Mabuza enthused during the webinar covered by Mining Weekly.

But what had to be recognised was that South Africa, after delineating and understanding some of the mineralising systems, relaxed its exploration effort.

This had been made apparent by a revisit to some of the old boreholes of, for example, the historic Witwatersrand basin, which had been exceedingly revealing.

“We’ve found some incredible information there that may potentially expand the extent of the Wits basin,” Mabuza revealed.

Regarding the huge minerals potential of the Northern Cape, South Africa had “barely scratched the surface”, and had paid scant attention to renewable energy being material intensive.

Regarding critical minerals that the world requires for renewable energy generation, he said: “We should have started yesterday to organise ourselves as a country to begin the search for these minerals”.

Owing to exploration being an ecosystem, building blocks needed to be put in place to unleash “this wonderful opportunity”.

“I’m delighted that we’re having this discussion now, so that we can strengthen and enrich our thinking in respect of re-imagining and recatalysing exploration activities”, which he described as South Africa’s lowest hanging economic fruit.

In addition, the desk works closely with mining associations, particularly Sadpo and the Clay Brick Association.

Junior mining and exploration have been identified as key components in developing and driving the overall mining sector.

The release of the exploration strategy and implementation plan by the Department of Mineral Resources and Energy in April spoke to the need for exploration to be increased to 5% of all global exploration dollars within the next five-year period.