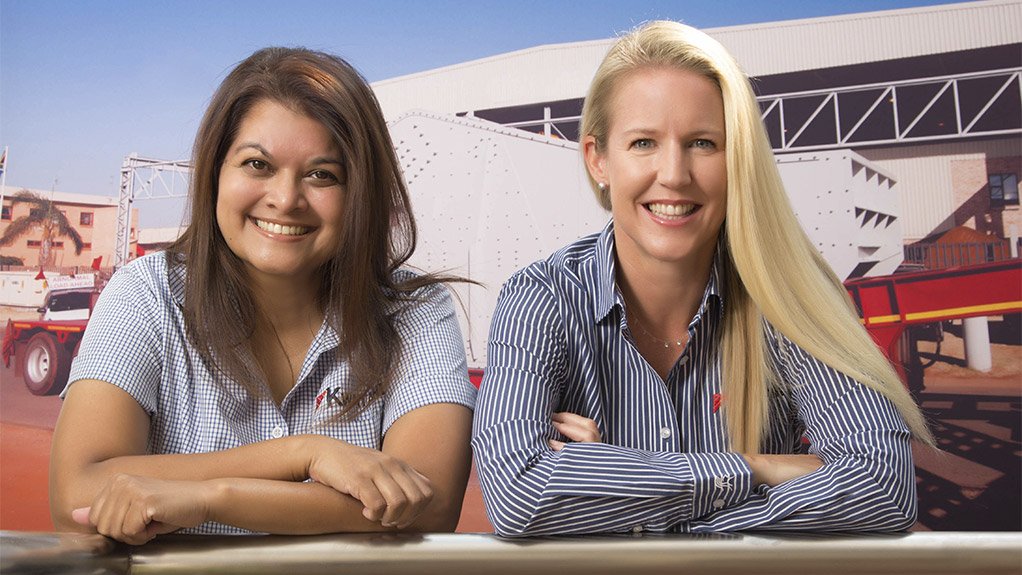 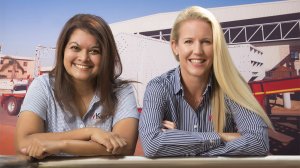 ELIZABETH ARULAPPEN AND KIM SCHOEPFLIN While two women sit on Kwatani’s executive committee, women also comprise 75% of the company’s board and more than 50% of management across departments

Historically, the mining industry has been “extremely” male dominated, but there has been a substantial drive locally to increase the number of women working in the industry, says women-owned vibrating equipment manufacturer Kwatani CEO Kim Schoepflin.

However, many other African countries are less progressive, she says.

“Africa is a complex, large continent with diverse countries and cultures, but access to education is a major inhibitor of women.”

According to independent international organisation the World Economic Forum’s Global Gender Gap Report 2018, Namibia ranks highest in Africa followed by South Africa in terms of gender parity. However, many African countries are below the global average in this regard, highlights Schoepflin.

Simultaneously, the mining and manufacturing industries are physically tough environments in which to work and, therefore, do not present themselves as natural career paths for women, Schoepflin explains.

However, she notes an increasing number of women at recent networking forums, as well as at mines, as an indicator of the progress made with regard to attracting women to the industry.

Mining Charter III, released in September last year, stipulates, among other requirements, that a minimum of 70% of total mining goods spend be on locally manufactured goods and should also include procurement from 51% black-women-owned companies.

The transformation of Kwatani, into a 51% black-women-owned company in December last year has resulted in a “massive benefit” for its clients, says Schoepflin.

Coupled with the company’s broad-based black economic-empowerment Level 1 status, miners can claim back R1.35 for each rand spent when they procure equipment from Kwatani, adds Kwatani commercial GM Elizabeth Arulappen.

“The company not only satisfies mining operations’ need of high-quality vibrating equipment but also allows for a procurement benefit,” adds Schoepflin.

Women play an active role in all departments and management levels of Kwatani.

Schoepflin tells Mining Weekly that, while two women sit on Kwatani’s executive committee, women also comprise 75% of the company’s board and more than 50% of management across its internal sales, finance, human resources and warehousing and dispatch departments.

They are also employed as senior metallurgists, mechanical engineers and capital sales engineers, among other technical roles.

Schoepflin highlights scope to include more women in technical roles at Kwatani, as well as an increasing number of women with the skills to fill these roles.

Subsequently, when recruiting, Kwatani specifies the need for women applicants, but always aims to employ the most suitable person for the position, states Arulappen.

However, despite women comprising 50% of the talent pool globally, there are still fewer women applicants. Therefore, for Kwatani to be as transformed as it is in terms of gender, “we are quite advanced”, says Schoepflin.

Established in 1976, the company has sustained double-digit growth over the past 20 years. Schoepflin doubts that Kwatani would have sustained this growth rate without its focus on transformation, including gender and other aspects of diversity, which she says has always played a critical part of the board’s agenda.

“Supporting diversity from the top down and leading by example are stronger than any policy, rule or regulation you can introduce,” she declares.

Coupled with its in-house engineering and fabrication, using almost 100% locally sourced materials, and ISO 9001:2015 accreditation, its focus on transformation has not only opened doors for Kwatani locally but has also resulted in the company growing internationally, with it having supplied more than 15 000 units to 37 countries globally to date.