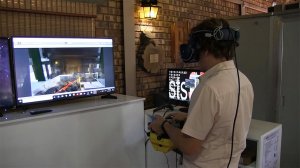 “Our solution is an attempt to demonstrate the advantages of applying digital training in mining,” says STS MD Wilhelm Prinsloo.

“But it is not only about the power of computing – we have really designed a solution to optimise learning.”

The VR stope comprises a training and an assessment mode. In training mode, learners follow step-by-step instructions on how and where to mark off the panel using a special paint brush. By repeatedly following these steps in a safe environment, learners acquire motor skills and build muscle memory, which will be recalled once they are in the actual mining environment.

Moreover, since the system provides immediate, visual feedback on whether the steps have been performed correctly, learning is optimised. The added ability to undo and retry allows for “effective, short-cycle feedback and learning”, says Bouwer.

Once trainees have completed marking and timing, they experience VR’s “art of the impossible”. When the detonation is set off right in front of them, they see the firing sequence and fragmentation of the rock. It also enables them to inspect the quality of the blast first-hand and to understand the significance of correct blasting procedures.

After a blast, the cameras track the position of the hard hat of the trainee, adjusting the perspective of the projections. This creates a three-dimensional depth illusion, which shows that the face wall has, in fact, advanced. This enables the trainees to study the results of their blast and make improvements where necessary.

In the assessment mode, trainees mark the blasting pattern and time the detonation sequence of explosives themselves. Once the marking pattern is submitted, the system takes a screenshot of the trainee’s attempt. The image gets saved to their PDF report, along with other useful  information recorded throughout the training.

The next phase consists of simulations of ventilation, testing for noxious gases, support installation and rock falls. These simulations enable miners to refine their decision-making in ‘life-threatening’ conditions, but in a safe environment.

Meanwhile, Bouwer notes that although designing and constructing the hardware, building the virtual stope and coding the functions were challenging, tracing the users in real time within this multidimensional stope proved to be more challenging.

This challenge was solved when motion-capture systems global leader Vicon assisted by providing a system that tracks the subject accurately, provided a marker was visible to a camera.

Vicon’s system can track up to five people simultaneously, which allows for the possibility of team learning and the training of large cohorts, says Bouwer.

Further, he points out that “despite the slow uptake” of VR, owing to the costs involved and fear of the unknown, STS notes steady growth in interest in VR training by several clients using robotics and VR.

“Early adopters, such as Anglo American, diversified miner Glencore and engineering company Murray and Roberts, have jumped in, and they all agree that VR training is very effective, so more and more companies are starting to see the benefit of VR in training and assessment.”