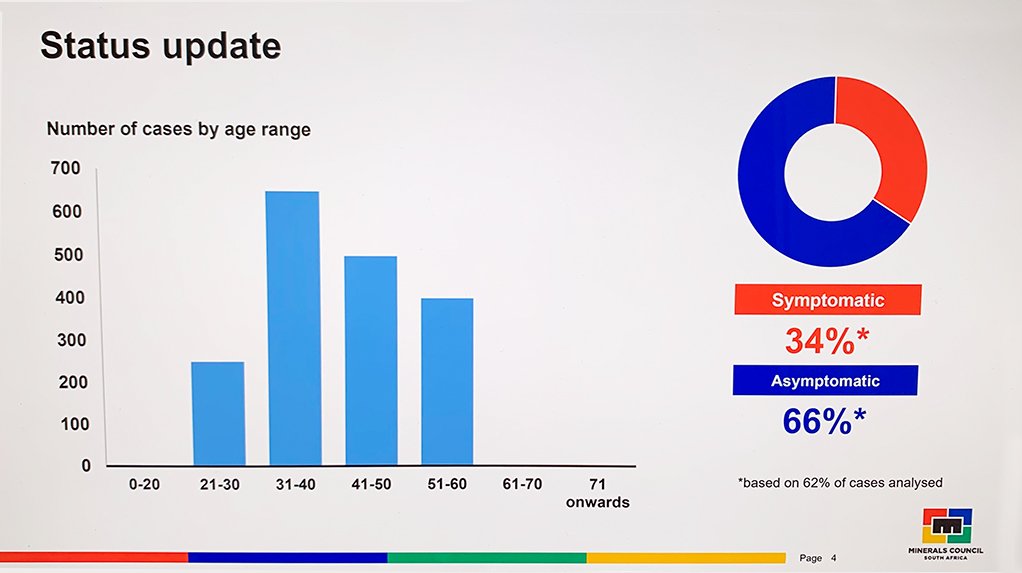 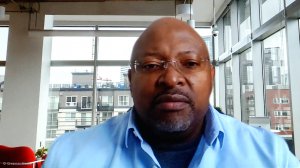 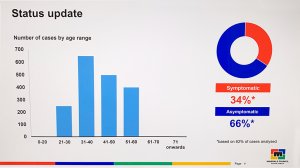 JOHANNESBURG (miningweekly.com) – Six mineworkers have succumbed to coronavirus since the start of the pandemic, Minerals Council South Africa said on Thursday.

Of the six who had died, three were employed in platinum mining and two in gold mining.

The mining industry continues to have higher testing rates of 3.78% compared with the South African rate of 2.39%.

The age group of mineworkers with the most cases is from 31 to 40. Sixty-six per cent of the cases were asymptomatic. (Also see slide attached.)

Chabana stated that testing was the ideal public health approach followed by isolating the infected individuals and thus curbing transmission to other people.

However, South Africa’s Covid-19 testing capacity had been severely constrained by the lack of availability of testing machines, testing kits and qualified staff.

The highest total number of tests processed in South Africa in a day was 40 000, 51% of them done by public sector.

Of greater concern was the significant lag in processing of tests, particularly in the public sector, that has had a material impact on the country’s clinical response.

The private sector’s testing capacity was also concentrated in the hands of a small number of laboratories, largely located in major metropolitan areas.

A number of mining companies have taken the initiative to procure and establish both their own testing capacity embracing machines, testing kits and reagents, and qualified staff, or to enter into arrangements with private facilities to secure access to increased testing capacity.

The Minerals Council  board on April 29 resolved to begin a study to see how the industry could collaborate to secure greater testing capacity for the industry, and for South Africa as a whole.

Companies would collaborate regionally while the Minerals Council was also engaging directly with the National Health Laboratory Service to understand and respond to specific needs in support of the country’s testing imperative.