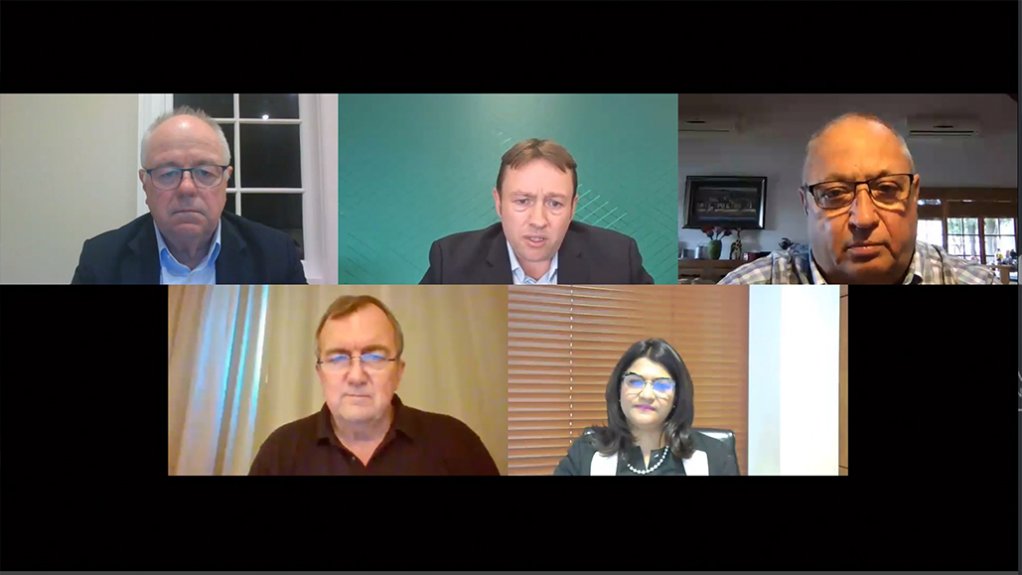 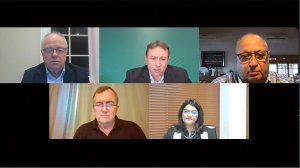 While silver is not a primary focus of Sibanye-Stillwater, the JSE- and ADR-listed company has by-product exposure to silver through its gold mining asset base, which it is seeking to expand to achieve a counter-cyclical balance to its platinum group metals returns that currently dwarf its gold returns.

“Silver is a by-product of gold in South Africa and silver was seen as perhaps an entry into the North American gold market in a small way when we were a much smaller company.

“But silver is also a smart metal, a hitech metal, that fits that group of battery metals, especially in the renewable energy space.

“It’s not a primary focus at the moment but having some exposure to silver would also not be bad,” said Froneman, who participated with Barrick Gold president and CEO Dr Mark Bristow, AngloGold Ashanti interim CEO Christine Ramon, and Perseus Mining MD and CEO Jeff Quartermaine.

Ramon, who has been interim CEO of AngloGold Ashanti since September 1, spoke of being accustomed, during her seven years with the New York- and Johannesburg-listed company, to working through the different points of the gold commodity cycle and being cognisant of how the business should be positioned through the cycles.

She had got to know the assets well during this time and had also worked very closely with the executive team and the teams at the operations.

The balance sheet had been rebuilt and the company’s current a world-class pipeline of assets developed.

In visiting the operations, she had been impressed by the energy of the teams in extending the lives of assets.

“We do have very simple business priorities in running this company and firstly it is about operating our mines safely, backing our industry-leading exploration team, being careful stewards of capital and, of course, to hold on tightly to our equity,” Ramon said, adding that the company had not issued equity in the last ten years.

“Our focus as a team has really been to improve asset quality and that’s why we focused on rationalising our portfolio over the last few years and we’re now focusing on our resources, which are our best assets, and that is being very well supported by our investors. We are really focused on making the most of those core assets and there’s really much more to come,” she promised.

Bristow drew attention to far more money being printed during the current Covid crisis than during the Great Financial Crisis of 2008, and the additional money being printed this time around going into the hands of ordinary citizens rather than when banks used it during the financial crisis to create tighter financial regulations. Moreover, the money put into the hands of the general population had been mostly spent on chasing new investment fads.

“I would say to anyone, if you have any spare money, you should invest some of it in gold. There’s never been a better logic to own gold, whether it’s gold equities or physical gold,” said Bristow.

“As people experiment with alternate investment fads, you’ll see that there’ll be an overall migration back to those trusted investment assets,” he forecast.

He decried the paying out by many mining companies of recent windfalls rather than using them effectively.

“You’ve seen Barrick take a totally different approach, much more conservative, much more about continuing to grow its asset quality and use some of that money, which we did in Randgold Resources in 2011 and 2012 when everyone was trying to chase fairies,” said Bristow.

Mining Weekly can report that following the financial crisis's multi-year spread, it was Bristow who took Randgold Resources, now merged into Barrick, to a new level, by remaining doggedly disciplined and using the spike in the gold price to pay down all debt. Now, a similarly conservative approach is currently being adopted by Barrick, which has trebled its dividend since the Randgold deal and has realised $1.5-billion from the sale of noncore assets.

Quartermaine spoke of his multi-country and multi-operation gold-mining company being a West African gold pure play. “We have been able to spread the risk within the West African region,” he said.

“There are many investors who would say, yes, we can invest in a global company but we would actually prefer to select the risks that we take on ourselves and so, on that basis, Perseus offers a pure play opportunity to investors. If they want to choose African risks and if they want to choose a company that represents West African risk in particular, that is well managed and has a very strong licence to operate in that part of the world, then clearly Perseus becomes a risk that is worth considering.

“I think some of the other factors of a company of our size is also its transparency. What you see is what you get. We have three openpit operations. Relatively simple to understand and the way that we record can be easily recognised by investors,” said Quartermaine, who drew attention to research published in Australia this week which drew attention to the marked difference between the actual corporate all-in costs of companies and the reported costs.

“Possibly the largest differentiating factor of our company relative to the very large companies is in the area of growth. In our case, we’re in a position where, organically, we’ve grown rapidly recently, having brought our third mine on stream late last year, and in the course of the next 18 months or so, we’ll go from producing say around 250 000 oz a year to producing over half a million ounces a year in fiscal 2022. With that comes very substantial increases in cash flow and also what it really does is it opens up the opportunities for investors to make very real capital gains by investing in a company like ours,” Quartermaine said.