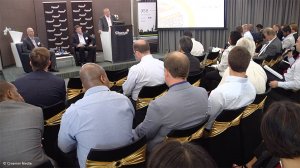 JOHANNESBURG (miningweekly.com) – Precious metals mining company Sibanye Gold is forecasting a capital expenditure of R3.9-billion this year, an increase of more than R400-million on 2015.

Sibanye CEO Neal Froneman told the BMO mining conference on Monday that the company was engaging in capital investment that was extending the life of the company’s gold and uranium division, which has been joined by the platinum division and the new coal and energy division headed by executive VP John Wallington. (Also watch attached Creamer Media video).

The Johannesburg- and New York-listed company, he said, had approved R1.8-billion ($113-million) for below infrastructure projects at its Kloof and Driefontein gold mines on the West Rand and R1.9-billion for the new Burnstone gold mine development on the South Rand area of the Witwatersrand, near the town of Balfour.

The company was anticipating a “very improved” operating year at a level of 50 t of gold or 1.6-million ounces.

Cash costs in rand terms at R355 000/kg and the current rand gold price of more than R600 000/kg were allowing for a considerably widened margin.

Last week the company showed its bona fides by offering to reopen talks with its employees, unions and associations on the creation of a new social and labour compact in view of its improved expected margins.