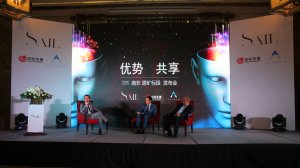 South Africa- and Singapore-based commodities trader Sail Group, in conjunction with integrated chrome producer Afarak Group and trade services company Chinalight Resources, launched the Sectional Block model – an approach to mine development that serves both the mine developer and the Chinese end-user – last month in Shanghai, China.

“End-users were exposed to price and supply risk, which prompted their decision to control the resource. This resulted in substantial monetary outlay and years of development time in order to acquire and develop the resources,” says Sail Group CEO William Yang.

However, he adds that, once the project reached the point of production, the market had already turned, rendering these projects marginal and, in some cases, uneconomic. Moreover, with lack of experience in a foreign environment, it is very risky for the end-user to operate a mining project.

Similarly, for the mine developer in boom times, Yang says, liquidity “is relatively available”. However, this is not the case during a market downturn and there is little appetite to develop new resources.

Therefore, the Sectional Block model provides a solution for the end-user conundrum. Sectional Blocking is a process of carving up a single mine and selling only a portion of the entitlement of the mine to the end-user. The end-user pays an upfront investment fee for the portion.

The mine developers develop the resource and manage all aspects of the mine, including securing the mine leases, being responsible for the upkeep of the equipment and managing the logistics.

The pilot project of the Sectional Block model is a chrome opencast mine in Limpopo. Mining started in April and is already producing chrome run-of-mine. Three blocks have been measured, demarcated and certified by mining consulting group MSA. Each block hosts about 100 000 t of LG6 chrome ore at a 55-m-high wall.

For $1.5-million, the investor is entitled to 100 000 t of opencast reserve as well as the use of all infrastructure and mining equipment, and the benefit of a mining and logistics management team. The total 100 000 t of chrome ore will be delivered within the first 12 months.

“This chrome project is already producing and is managed by Afarak Group, says Yang.