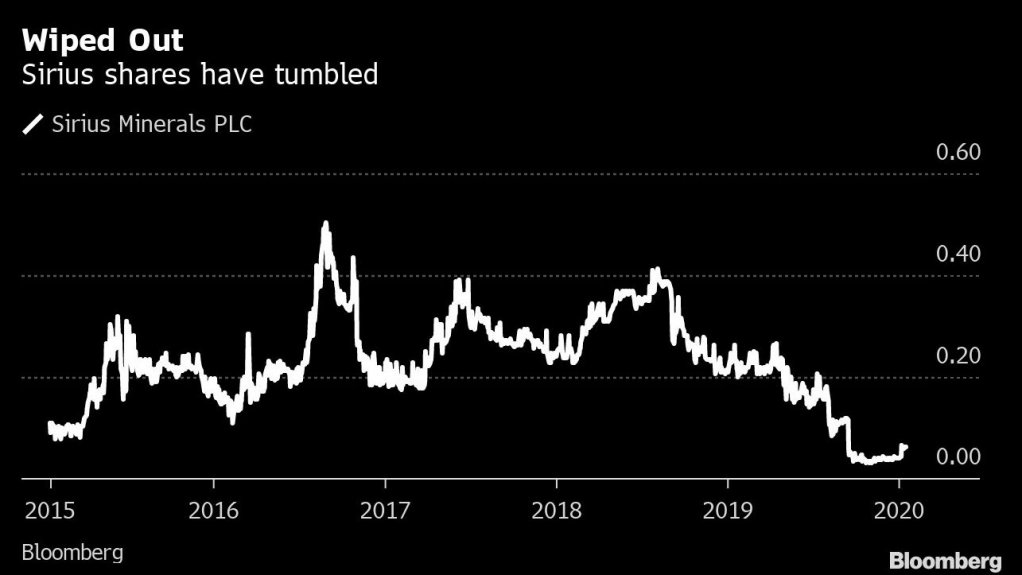 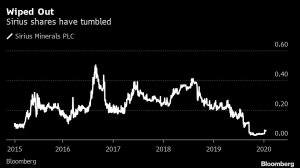 The deal will ensure billions of dollars of investment in the downtrodden region of North Yorkshire. But people like Neil Trillo, one of the thousands who bought shares in project owner Sirius Minerals before it ran out of money, have been left counting their losses.

“It was a bit of a local dream,” Trillo said from behind the counter of his coffee stand in the seaside town Whitby. “Get involved with something local, something on the doorstep with a hundred-year plus tenure. That’s what was sold to investors.”

The story of Sirius Minerals caught the imagination of retail investors in a dramatic way. Across the country, regular people poured money into the company, betting on a vision from the management team to defy the critics and build the $4-billion project.

The ambitious plan calls for huge tunneling machines that will bore into the rich seams of fertiliSer beneath the sea and moorland. The mining project is the UK’s biggest in more than four decades and offers the promise of jobs and life-changing royalties for some landowners living above the deposit.

The company looked like it might actually pull the whole thing off, but stumbled at the final hurdle last year when it failed to unlock the last piece of financing. Sirius was forced to slow work on the giant shafts it had already started sinking and look around for other sources of money. That’s when Anglo stepped in with a rescue offer.

The deal announced Monday saves the project and more than a thousand jobs. But some investors like Trillo, who bought shares for as much as 33p, are frustrated by the 5.5p takeover price.

Tom Moffat, a civil engineer from Essex, east of London, invested 10 000 pounds in Sirius shares about two years ago.

“It was a project that could have taken off,” he said Monday. “It still could, but not for the likes of myself to gain from it.”

The Sirius project was the brainchild of Australian Chris Fraser, who bought the asset in 2011. The former Citigroup banker has been living in Scarborough, a seaside town near the mine for years, and is well known in the area. He’s agreed to join Anglo for at least a year, and continue to run the project.

“It was a bit of a local dream”

While he’ll get about 6.8-million pounds for his stake, like many other shareholders, he’d likely hoped for much more after almost a decade’s work.

“The returns that this offer would represent are not what either our shareholders or the Sirius board had previously hoped for,” said Chairman Russell Scrimshaw. “If the acquisition is not approved by shareholders and does not complete, there is a high probability that the business could be placed into administration or liquidation within weeks.”

Anglo CEO Mark Cutifani conceded that many retail shareholders wouldn’t be satisfied with the outcome.

“We are sensitive to the fact that the price is lower than many people may have invested,” he said. “We think the certainty that we’re providing going forward is very important.

While shareholders contemplate their losses, the takeover by one of the world’s biggest and richest mining companies is a boon for the region of North East England. Once a key steelmaking region, it’s fallen on hard times as plants closed.

“Sirius Minerals represents one of the most significant economic stories for our region for many a year,” said Andy McDonald, who represents Middlesbrough in Parliament. “It seems that the Anglo American offer may be the right way to bring this massive economic opportunity to fruition.”

Sirius has already started work on two giant shafts and a 37-km tunnel to transport the potash to the port at Teesside. One of the shafts has reached more than 100 m deep, with 1 200 staff and contractors on site.

However, the company still needed another $3.3-billion to finish building the mine. Anglo will now take over that commitment, including securing jobs in the region.

“This is about preserving and creating jobs, not cutting them,” Cutifani said.