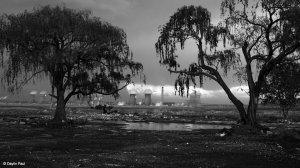 An image from Daylin Paul’s black and white photographic book, titled ‘Broken Land’, which offers a visual narrative of the environmental and social impacts of coal in Mpumalanga

Minerals Council South Africa has signalled its support for South Africa’s transition to a low-carbon economy, but is concerned that the immediate risks associated with the country’s more ambitious decarbonisation targets are not being adequately addressed.

CEO Roger Baxter told participants to a virtual Presidential Climate Commission dialogue on the just transition on Thursday that systemic policy interventions, and other support, were required to drive a “risk-managed decarbonisation journey for South Africa”.

He stressed that the domestic mining industry was supportive of implementing measures to transition to a low-carbon economy and was also convinced that green energy could create significant new opportunities, particularly in the area of green hydrogen.

However, the transition had to be grounded in a systemic analysis of the risks and “pragmatism must prevail” so as to minimise disruptions to reliable electricity supply.

“However, the Minerals Council does not see that the increased immediate-term risks related to this ambitious target are being adequately addressed, especially risks to electricity supply,” Baxter said.

Technical, financial and capacity building, together with enabling policy framework, would be required to meet the NDC obligations, he added.

The revised NDC was approved by Cabinet in mid-September and will be deposited with the United Nations Framework Convention on Climate Change ahead of the upcoming COP26 climate talks in Glasgow, Scotland.

The higher figure is said to be in line with the Paris Agreement's commitment to limit the rise in the average global temperature to below 2 °C above pre-industrial levels, while the lower figure is consistent with increasingly assertive moves to cap the rise at below 1.5 °C.

The most recent Intergovernmental Panel on Climate Change report warns that the 1.2 °C threshold has already been breached and that accelerated mitigation action is required this decade for the 1.5 °C target to remain within reach.

“We support the transition to a low-carbon economy and society – contingent on doing it judiciously and systemically,” Baxter said, adding that ensuring that the transition was just for coal workers and communities was dependent on “a compelling plan that understands the socioeconomic implications of the transition”.

There was also a need to acknowledge, he argued, that coal remained a critical component of energy provision and economic development, contributing R80-billion to gross domestic product (GDP) yearly, while sustaining 120 000 jobs and supporting the livelihoods of some 500 000 households.

“Coal-related energy accounts for 45% of employment, 60% of GDP and 70% of export earnings and is hugely important to specific communities, particularly in Mpumalanga,” Baxter said, indicating that this contribution would taper over time.

While the transition offered significant new economic opportunities for South Africa, Makgetla said stakeholders in the coal value chain faced substantial costs, particularly as the transition accelerated towards the end of the current decade.

“Coal mining will be the most affected by the decline in coal use, since downstream production can move to other energy sources.

“In this context, many working people and small businesses in the coal-dependent districts of Mpumalanga will need collective support in order to take advantage of new opportunities,” she said.

The “pillars of the just transition” would be diversification of economic activity in towns such as eMalahleni (Witbank), Steve Tshwete (Middelburg), Govan Mbeki (Secunda) and Msukaligwa (Ermelo), as well as active labour market policies and the provision of social protection.

Effective implementation would depend, meanwhile, on stakeholders reaching agreement on the definition of a just transition in the South African context and on government taking key decisions to clear blockages to the transition, including terminating plans for any large new coal plants.

“A successful and cost-effective transition requires collective action to enable the affected working people and their communities to develop new livelihoods while strengthening participatory democracy and social solidarity,” Makgetla said.

Calls for an increased participation of workers and communities in shaping the content of the transition were also made during the recent launch of Daylin Paul’s photographic book, titled ‘Broken Land’, which offers an emotive visual narrative of the environmental and social impacts of coal in Mpumalanga.

During the launch, hosted by EE Business Intelligence, groundwork community activist Thomas Mnguni said that, if there is to be a just transition, affected individuals and communities need to have a say in the types of projects and interventions that should be implemented.

“People who live next to power stations and mines currently don’t always have electricity themselves, or can’t afford electricity.

“These individuals and communities need to be informed and also need to be involved in decision-making processes,” Mnguni said.