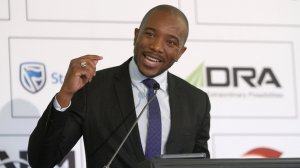 JOHANNESBURG (miningweekly.com) – Mining Charter Three should be ripped up, proper tax incentives introduced and junior mining enterprises supported to restore investment in the mining industry, which is a stimulator of the South African economy as a whole, Opposition Democratic Alliance leader Mmusi Maimane said on Wednesday.

Delivering a keynote address on the first day of the fifth Joburg Indaba conference, Maimane said it is an indictment against South Africa and the mining industry that the country’s last significant diamond discovery was at Venetia 40 years ago.

He said Johannesburg should be the big mining capital and not Perth, but it was not, because South Africa had shut the door on new mining development through discouraging policy.

New mining developments were virtually nonexistent despite thousands of mining rights having been issued to people with no interest or expertise.

“This is how we kill an industry,” he said, adding that in countries other than South Africa investors are able to gain mining right information online.

Ninety per cent of mining students are black and they should be the mining entrants of the future.

In the early eighties, mining contributed 21% to South Africa’s gross domestic product (GDP) but currently both mining and manufacturing have dropped out of the top three, with mining contributing only 5% of GDP.