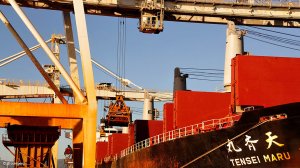 PERTH (miningweekly.com) – New data from the Australian Bureau of Statistics (ABS) has shown that the resources sector is still driving the economy.

The ABS on Thursday reported that Australia’s exports of goods and services surpassed A$400-billion for the first time in 2017/18, owing mainly to growth in resources exports, which accounted for 55% of total exports.

Resources exports, including minerals, metals, coal and petroleum, were a record high A$220-billion in 2017/18, up 11% from the previous year due to rising exports of coal, gold, base metals and liquefied natural gas (LNG).

Despite lower prices, iron-ore remained Australia’s largest source of export revenue with A$61.4-billion shipped in 2017/18, while coal exports were only just behind, reaching a new record high of A$60.1-billion in 2017/18, up 11% or A$5.9-billion, from the previous year.

Gold exports, including mined and refined gold, set another record for export values with A$20.1-billion of the precious metal shipped in 2017/18, the first time in Australia’s history that gold exports have exceeded A$20-billion.

Exports of base metals and other minerals showed strong growth as a result of higher commodity prices and totalled A$38-billion in 2017/18, also a record high.

The Minerals Council of Australia said on Thursday that the resources export revenue was delivering benefits to all Australians.

“And Australia is also poised to seize future opportunities for minerals resources that will come from growth in new consumer, energy and transportation technologies around the world.

“We have extensive resources of the rare earth elements, base metals, lithium and precious metals that are the essential materials in smart phones, electric vehicles, modern energy systems and industrial machinery.