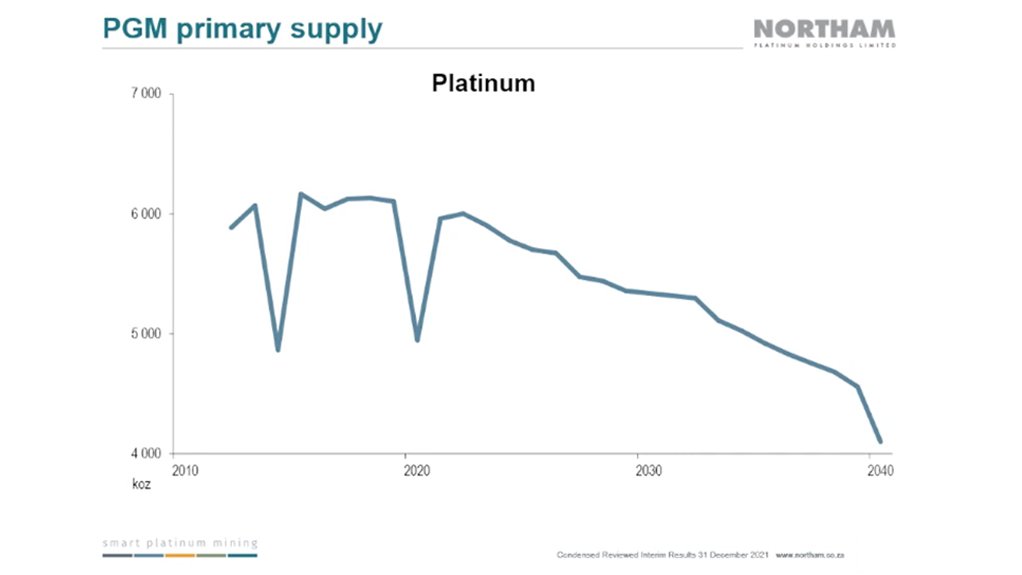 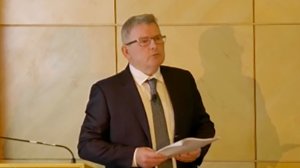 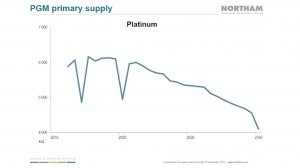 JOHANNESBURG (miningweekly.com) – Platinum group metals (PGMs) mining company Northam Platinum displayed graphs during Thursday’s presentation of half-year results, which indicate that PGMs supply is on a hiding to nothing on the way to 2040.

The graphs focus on primary mining supply of platinum, palladium and rhodium across the next 18 years.

“For platinum, we forecast continuing contractions in supply over this period,” he said. (Also see attached image.)

“This bottom-up analysis has been constructed on a shaft-by-shaft, half-level by half-level basis, from resources through to reserves and then finally through to final production, and includes all announced projects,” Dunne said.

In displaying the slides, Dunne highlighted that Northam’s view of the future of PGMs differed from what is understood to be the current market consensus, contending that the dearth of mining investment over the past decade would have supply consequences.

He did so in the same week as 17-page analysis by independent precious metals consultant Dr David Davis pointed to China’s importation of platinum having shifted the platinum’s supply balance into deficit – even though a platinum surplus continues to be assumed across a broad front.

Speaking to journalists during a media roundtable in which Mining Weekly participated, Northam expounded what it also described as a non-consensus view: “We do not hold the view that internal combustion engines (ICE) will be replaced by battery electric vehicles (BEVs). Let me say it absolutely bluntly. Internal combustion engines of one form or another will be around across the world for many decades to come.

“On that basis – it’s like a double-edged sword in a way – we acknowledge that BEVs have a role to play. However, we do not believe they will completely replace the ICE. What that means is, if you do produce an ICE, or a hybrid ICE, it must be clean. The public and the social environment across the world will not accept less than optimal exhaust solutions,” he said.

He spoke of one hybrid vehicle range “literally running on thin air” of five litres of fuel per 100 kilometres travelled.

“It’s incredibly efficient, and I think the list price is somewhere around R420 000. It’s a very, very cost-effective motor car, both from a capital point of view and on running costs.

“On that basis, we do not believe that we’re at peak PGM, as some people have portrayed. In our analysis, hybrids will do very well, and on that basis, PGMs are absolutely essential. We see strong demand into the future for the automotive metals – palladium, rhodium and platinum.

“The hydrogen metals – platinum, ruthenium, iridium – the same, and you’ve seen our graphs on depletion. The body of work behind those graphs is extensive,” Dunne said (These are shown in the attached Creamer Media video.)

Mining companies could only produce PGMs from the assets they had and those not reinvesting in mining would consume what they had rapidly in view of expected demand.

Meanwhile, during the long period of underinvestment by PGMs mining companies, costs had escalated substantially.

“When you don’t do things for ten years, you forget what it costs, and then when you wake up one morning and decide to build something, the cost of it is going to hit you in the face. It inhibits the decision to do a new build because of what it now costs to replace some of these PGMs assets.

“We have depleting mining assets. We have a lack of capital investment, a lack of build for at least a decade. The cost of that build today is difficult to swallow. In turn, that means that the existing asset base has a higher value because inherently it is rarer,” he added.

In that period of underinvestment, Northam has been investing. It has created close to 9 400 new direct jobs in some of the least economically developed and improverished areas of the county.

It has almost doubled its workforce against the backdrop of a shrinking mining sector and a struggling economy.

During the last six months, it has added over 1 100 permanent employees at Booysendal South in preparation for full production. It has been ramping up its mining teams at Eland Platinum and adding development crews at the Western extension of Zondereinde.

The salary bill for the half-year totalled R2.8-billion, with all employees having health care and home-ownership assistance.

Northam’s half-year tax bill was R3-billion. Over and above that, it paid R700-milion in royalties and employees paid R560-million in pay as you earn personal tax.

In reporting 60%-higher half-year headline earnings a share, the JSE-listed company stated that growth outcomes would inform its approach to dividends and highlighted that it still had an option to acquire a further 3.29% in Royal Bafokeng Platinum (RBPlat), which would take its holding to within a hair’s breadth of 38%.

“It aligns perfectly with our growth, sustainability and diversification strategy, and the consequent introduction of Royal Bafokeng Holdings as a significant shareholder further strengthens our empowerment credentials,” he said, adding that RBPlat investment was underpinned by its bullish view on the PGMs market, growth strategy, empowerment and community development.

Earnings before interest, taxes, depreciation and amortisation increased by 19.1% to R6.4-billion.

Northam stated that its capital expenditure (capex) of R2.3-billion kept all projects on track, with the operating margin falling marginally to 42.2% on an increased profit margin of R5.9-billion.

The company stated that the eastern and western limbs of the Bushveld Complex hosted ore bodies with favourable platinum and rhodium loadings, and described these deposits as being extremely rare.

In the period Northam reported that it had made expansionary project progress at the Zondereinde Western extension and at Booysendal’s South mine.

It stated that the Eland mine was continuing to ramp-up and the addition of the recently acquired Maroelabult section was adding considerable synergistic benefits.

Sustaining capital doubled to R776.9-million largely owing to the smelter furnace rebuild at Zondereinde and fleet replacements at Booysendal. Group capital expenditure for the full financial year is forecast to amount to R4.6-billion.

At Zondereinde mine, stoping is ramping up within the Western extension section, the deepening project has made further progress and reaming of number 3 shaft is on track. At the metallurgical facilities, upgrades to the material handling infrastructure together with the planned rebuild of furnace 1 were completed. Capacity upgrades at the base metal removal plant have also begun, aligning with the group’s growth profile.

Booysendal South development is on track. Construction of surface infrastructure has been completed and underground development and upper group two (UG2) reef stoping ramp-up at the Central UG2 modules is progressing. Decline development at the South Merensky module is on track. Underground stoping has started at the BS4 UG2 module and will ramp up over the coming 12 months. The North aerial rope conveyor was commissioned in December 2021 and is operating within design parameters.

At Eland mine, development of the Kukama decline system has progressed well, as has strike development to connect with Maroelabult mine, where underground stoping ramp-up is in progress. In addition, opencast mining of UG2 commenced in the eastern portion of the mining right during the first quarter. First ore was delivered to the concentrator during the second quarter.

In a Stock Exchange News Service announcement, Northam described RBPlat’s metals mix as being complementary, with a higher relative platinum contribution, which, it said, fitted well within the broader Northam metals basket.

“The RBPlat assets are young, shallow and well capitalised and occupy a strategically important position in the western limb of the Bushveld Complex. Northam recognises the Royal Bafokeng Nation’s important contribution and ongoing legacy in respect of RBPlat and is cognisant of Northam’s responsibility in respect of the long-term sustainability of RBPlat’s operations and its impact on the broader communities and the Royal Bafokeng Nation as a whole,” said Dunne.