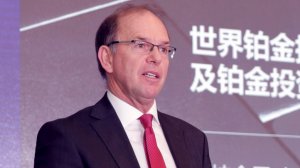 “Why I say that platinum remains undervalued is that we've got a situation where the opportunities for platinum look good.

"Supply is expected to be down by 8% this year. We've had jewellery and industrial very strong, very robust under the circumstances, and automotive particularly strong,” WPIC research director Trevor Raymond told Mining Weekly in a Zoom interview. (Also watch attached Creamer Media video.)

“If you look at the automotive demand, despite all the headwinds that we've seen in the global market regarding economic growth and inflation, we've got automotive demand higher than it was in 2019.

“That’s largely to do with loadings and some substitution for palladium, so you've got this very interesting supply-demand balance, yet we have a price that remains almost range-bound, and it looks pretty weak”, which Raymond attributed largely to metal that has flowed out of both exchange traded fund (ETF) holdings and exchange stocks, for different reasons.

Mining Weekly: High platinum lease rates have persisted throughout 2022. What does that indicate?

Raymond: That's the rub. You’ve got this unusual situation. When we spoke in May, we were forecasting a surplus for 2022 of about 627 000 oz. In today's report, we're forecasting a surplus of nearly a million ounces, 974 000 oz. Yet we've got a lease rate in the market that is ridiculously high. We know that when there's unavailability of platinum in the spot market, more people are forced to lease metal and that puts pressure on the lease rates and in May this year, we saw the lease rate higher than it was even at the peak of the pandemic, when understandably, it was very difficult to get metal. So, we've got this very high lease rate and then a sustained rate, which is still about 4%. That might not sound like a lot, but for the ten, 12 years before Covid, that rate sat at about 0.1% to 0.5% in the market. Obviously, financing costs would be added to that between counterparties but you've got a rate that is four or five times what the historic norm is. The real reason for that is that there's been huge imports of platinum into China. Last year, we saw that China imported an extra 1.2-million ounces above their identified demand. If we project the quarter-two surge, it looks like the same thing will happen, and that will almost entirely absorb the surplus that we're publishing, so it is a bit of a paradox in that you've got an indication that there's tightness in the market, extreme tightness, yet we’re publishing a surplus and I think what it is, is part of that metal going into China certainly is of a speculative nature. People that understand this market, see the point I raised in your first question, the fact that platinum is undervalued. They’re prepare to increase the stock holdings, but we also do believe a lot of that metal is being used either in industrial applications, or certainly in higher loadings on heavy duty trucks, so I think that lease rate does tell a lot about what's currently going on in the market.

To what extent are constrained mine and recycled supply adding to platinum supply risk?

So, yes, it's been a bit unusual over the last few years. Covid reduced supply from South Africa, but at the same time we had a metallurgical lockup at the Anglo converter plant and they took a lot of material out and that will basically came back into the market last year, so there was quite a high flow of platinum from supply, and because of the high palladium and rhodium prices, fantastic dividends being paid by all of the platinum group metal mining companies in South Africa, I suppose, to the to the untrained eye, or the lay reader, the assumption was, well, their earnings are greats, they're producing more metal. That ended at the end of last year, so we've got 2022 supply significantly down in 2021 by about 8%, largely because of that release of metal in the last period. But if you have a look at our quarterly number, quarter two was quite strong. Although there's been some severe pressure on the electrical grid in South Africa, that only really started happening to the latter part of the quarter that we’re reporting on. Since then, electricity concerns have been quite high, labour shortages certainly, so supply, certainly from a mining point of view, has been constrained.

Then the second point you mentioned is recycle and what we know there is that there's been a lack of availability of new cars globally. The automakers have just been unable to produce enough cars to meet consumer demand, and what that's meant is that people have had to keep the cars longer. We've seen the price of secondhand cars go up by as much as 40%, in the US market particularly. Because people are hanging on to their cars for longer, there are fewer end-of-life vehicles being scrapped, and because the vehicles don't get scrapped, those scrapped autocatalysts don't find their way to the recycled supply. That recycled supply is quite significantly down 20% year-on-year, and not expected to recover anytime soon. The automakers are still having quite a tough time to get out of it, so both mining supply and certainly recycled supply are constrained for the next few years.

What is Europe's Russian gas cuts and the US’s Inflation Reduction Act poised to do for platinum demand?

Those are fascinating developments. What we saw when we last spoke was that Europe was extremely concerned about the importing of Russian gas and the purchasing of that gas funding the war in Ukraine. What Europe’s undertaken is to replace 20-billion cubic meters of natural gas using green hydrogen. The big focus of that is on energy independence and reducing reliance on Russia. What that's done is said that they need to generate more green hydrogen and PEM or platinum-based electrolysers are ideal to do that. The platinum electrolyser is more suited to solar and wind because it can adapt to the changes. The other technology, alkaline, certainly prefers a fixed load, so that boost, firstly in Europe to produce more green hydrogen, means more platinum going into platinum-based electrolysers, and the other thing is that it makes more green hydrogen available for fuel cell vehicles. Then, most recently, the Inflation Reduction Act in the US – most people are calling it a Climate Act because a large chunk of that funding is purely aimed at addressing climate change – that also means that there'll be significantly more green hydrogen. In fact, in the US, there's up to a $2/kg rebate on producing green hydrogen. That changes the game considerably, because suddenly green hydrogen is more attractive than grey hydrogen, and more attractive than fossil fuels. We think that these two significant funding sources from two major economies will result in a lot more green hydrogen being available. That spills over into that availability meaning the application of more fuel cell vehicles. That's likely to be fuel cell trucks, in the first instance. They certainly are poised and ready to do that, so both very good news for platinum being seen by a lot of investors for its essential role in unlocking the use of hydrogen to decarbonise, and lot of investors that we've engaged over the last eight years and encouraged to look at this asset, are now seeing that that connection is right, but then looking at demand growth and constrained supply as a good reason to increase investment in platinum.

There are concerns in the market that rising inflation and declining economic growth will reduce demand for consumer goods and in particular motor vehicles. Does this mean that demand for platinum, used in car catalysts, will fall, and should investors be concerned?

That's a great question, and I think you're quite right. I think people are assuming that as global economic growth is down, inflation is up, interest rates are up, particularly in the US, people are not going to buy cars, and because they're not going to buy cars, they automatically assume that in the US, there'll be less demand for palladium. With substitution, that impacts platinum more than it used to, and certainly in Europe, if people aren't buying cars that should mean fewer cars produced and less platinum. That is a logical assumption. The interesting thing is what we've had for the last two years is the significant difficulties in the automaker camp. Firstly, the semiconductor chip shortage that occurred and then, in general, supply chain shortages, so the automakers haven't been able to make enough new cars to meet consumer demand. They’ve also drawn down their stock levels horribly. While we believe that the inflation and economic outlook will reduce consumer purchasing power, and certainly consumers will struggle more to buy new cars, the amount of that production is unlikely to get even as low as the level that the automakers can actually produce at, so it's an impact but in terms of our forecast platinum demand, it actually doesn't impact the platinum demand because the automakers are going to make as many cars as they possibly can, and they probably still won't meet demand even though the demand is lower. I think that sentiment about just general poor economy, less vehicles, less platinum, has added to the fact that the platinum price has been range bound, as this metal has flowed out of ETFs, partly on the back of this type of sentiment, and certainly the exchange stocks reflecting our data as negative investment demand, but those exchange stocks have moved. We've had 500 000 oz that have come out of New York stocks that have come to London and Zurich that have then been exported into China. That metal is unavailable. It certainly has been a source of supply and that sort of explains why the price has been weak, but again, the assumption might just be, poor economies, poor platinum, so hopefully our data helps to unpack that, and you can see that the strong automotive demand certainly is counterintuitive.