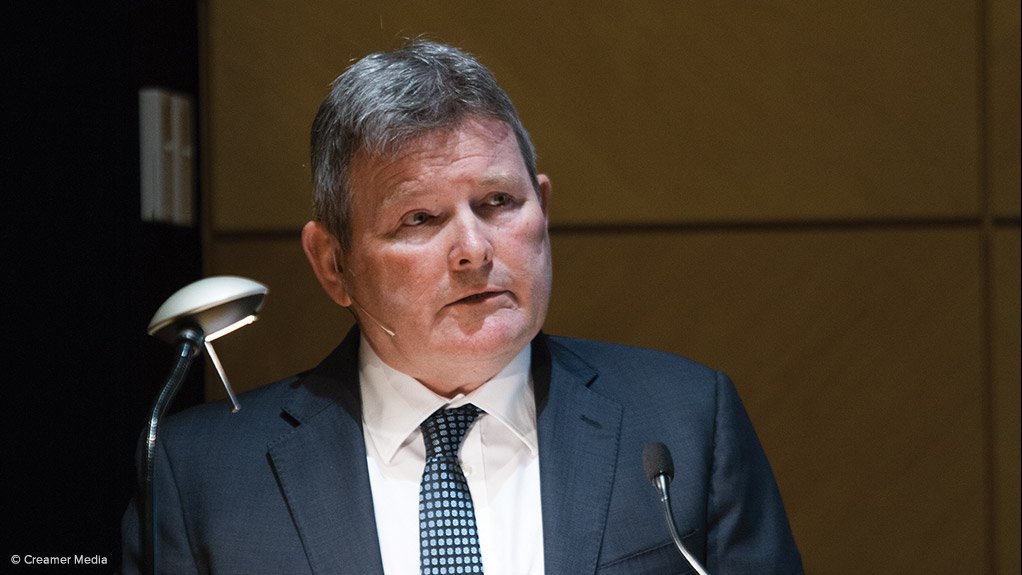 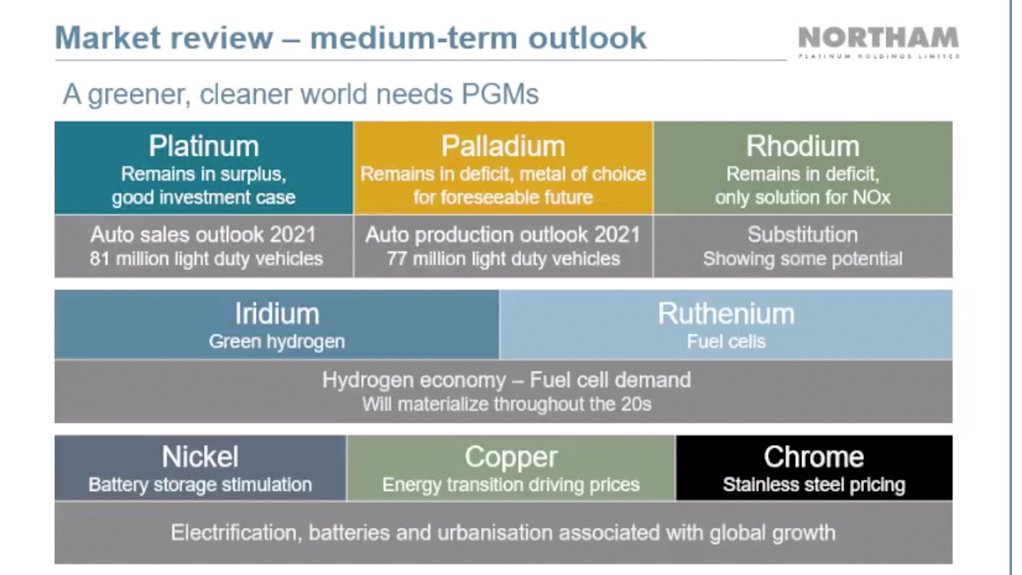 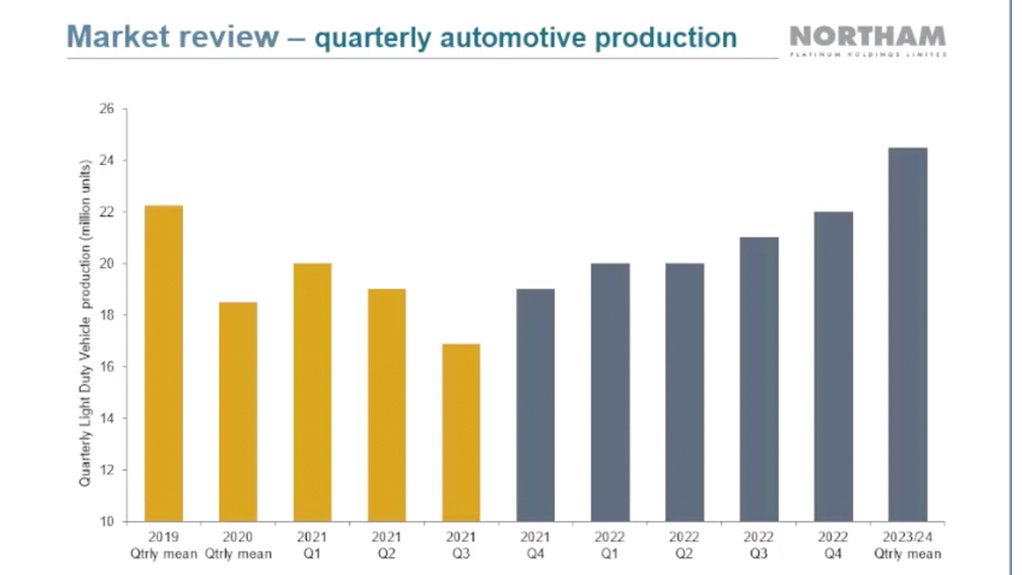 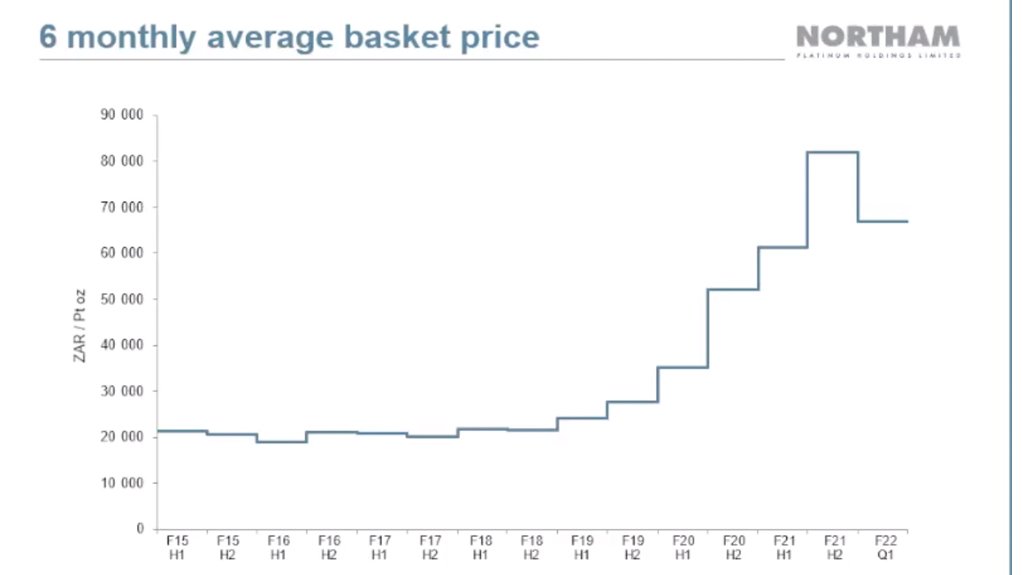 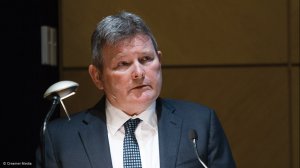 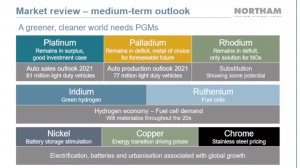 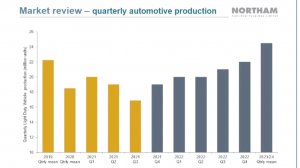 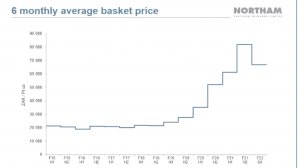 In delivering a market review at Northam’s presentation of spectacular operational and financial results, Dunne said we may expect platinum and palladium to reach parity over time as platinum benefits from the hydrogen economy, towards the end of this decade and into the 2030s.

However, he described current market conditions as being peculiar, owing to the semiconductor chip shortage the automotive industry brought upon itself slowing demand for platinum group metals (PGMs). (See also attached slides.)

“Most importantly, the chip shortage adds less to any platinum oversupply estimates for 2021 than the market might be assuming,” Clifford stated.

When it comes to the importance of the automotive sector to the PGM market, “we only have to look at the percentage of metals employed in autocatalysis to appreciate how important the automotive sector is to the PGM market. Around 85% of palladium and 90% of rhodium is used in this single application”, Dunne noted at the results presentation covered by Mining Weekly.

But automotive production in quarter three of this year has been very badly below par when compared with quarterly global light duty vehicle production for calendar years 2019 to the present, together with quarterly projections out to 2024, as shown on the attached graph.

“What we’re seeing here is a very unusual set of circumstances brought about by Covid-19 and the resultant logistical constraints across the global supply chain,” said Dunne.

During this period, the spot market for palladium and rhodium has been very depressed.

But Dunne emphasised that it remains important to realise that the underlying demand for cars by the general public, together with an aging commercial fleet, is creating substantial and as yet unsatisfied demand into the future.

“What we’re seeing is that the semiconductor chip bottleneck is slowly moving downstream, in fact to the testing facilities now, as opposed to the production facilities, situated mainly in Southeast Asia, and that region is currently experiencing lockdowns associated also with Covid.

“We would expect metal price recover to follow a similar path to the recovery in automotive production and this should be led by palladium and rhodium,” Dunne said.

Northam’s longer-term view for its major metals remains largely unchanged with palladium remaining the metal of choice for gasoline engines while rhodium will continue as the only viable solution for the control of nitrous oxide. or NOx.

“Demand for these metals will remain strong throughout the decade. Platinum is viewed as an investment case for the moment, offering good relative value. We may expect platinum and palladium to reach parity over time as platinum benefits form the hydrogen economy towards the end of this decade and into the 2030s,” he reiterated.

The emerging energy crisis in China, and to a lesser extent Europe, should, he said, convey to all investors that electrification of mobility through battery electric vehicle technology would face very substantial headwinds.

In the meantime, on Northam’s PGMs front, ruthenium, for fuel cells, and iridium, for green hydrogen, were continuing to grow in prominence, as was its base metal byproducts of nickel, for battery storage, copper across the board, and chrome for stainless steel.

“There is a growing shift towards renewable energy sources, and this will continue to support prices for all the minor metals,” said Dunne.

During Northam’s media roundtable, Dunne elaborated on the semiconductor chip issue and the multifaceted confluence of events that had led to the chip shortage.

The chip shortage, he said, began during the first Covid lockdowns. Because the automotive OEMs believed they were facing long periods of very depressed demand for vehicles and a lot of supply chain orders were cancelled, they effectively cancelled their orders on chip producers.

“Automotive chip consumption is only about 8% of the total world market for chips. We are talking about generic chips here. They are not the complicated chips. It’s your everyday chip.

“Post the Covid unlocking and the recovery of the situation across the world, there has been a tremendous demand for vehicles for personal transport, which has exceeded everybody’s expectations, including the OEMs themselves.

“Unfortunately, the OEMs do not have the purchasing power in the chip market as they may have perhaps in, for instance, our PGMs market and other parts of the supply chain. They are behind the eight ball a little bit here in terms of restoring health to that supply chain problem that has been created effectively by Covid.

“Complicating that issue was the fire at one of the big chip producers in Japan and a very harsh winter in Texas, also a big centre of chip production. More recently, in Southeast Asia, where a lot of the chips are tested before release into the market, are lockdown issues inhibiting people’s ability to work,” he said.

The semiconductors are shipped across seas in containers, which have had a threefold to fourfold price increases “and you still have to wait at this price level. If you want them quick you must pay even more. So, there are huge logistical constraints that have developed across the world in supply chains generally.

“Also, when we all stayed home during lockdown, people surrounded themselves with devices and appliances and many televisions sets, iPhones and iPads were purchased. In fact, there has been an absolute boom in electronic goods, and that is a high source of demand for chips,” he said.

Although uncertainty regarding the scale of the impact from the global semiconductor shortage increased downside risk for automotive demand for all PGMs, WPIC stated that it saw automaker efforts to protect higher margin product lines as shielding platinum demand and the chip shortage adding less to any platinum oversupply estimates for 2021 than potential market assumptions.

The global semiconductor shortage, Clifford stated, stemmed from increased demand for personal electronic equipment since 2020, exacerbated by Covid-related semiconductor production disruption and shutdowns in 2020 and 2021.

In response, automakers had suspended production lines, and/or limited the availability of optional extras, for example automatic handbrakes, to reduce per-vehicle semiconductor requirements.

Automotive production challenges were reportedly more acute in North America and Asia, than in Europe, which was potentially again more detrimental for palladium than for platinum, WPIC’s analysis reiterated.

Uncertainties around the duration of supply chain challenges as well as automaker ability to thrift semiconductors to support vehicle production numbers, were leading to a wide range of global vehicle production estimates for 2021, extending out to 2023.

WPIC said that it would update its 2021 forecast on November 24, but presented a range of vehicle production scenarios and the flow-through impact on platinum and palladium demand, as well as sensitivities in that demand
to changes in the global vehicle product mix.

A key assumption in WPIC’s vehicle production scenarios was that consumer demand would be unchanged despite supply constraints.

Thus it anticipated automakers would respond to pent up demand as supply chain challenges eased. It put the spread in automotive platinum demand between the scenarios at as much as 369 000 oz in 2022 compared with 843 000 oz for palladium.

Beyond the automotive production scenarios, there was also scope for vehicle manufacturers to prioritise higher margin products, which were typically more favourable for platinum demand.

To put this into context, WPIC’s base case estimate was for a 35 000 oz variation in platinum demand for every one million change in global auto production, if cuts are spread evenly across all product lines.

That would shrink to a 28 000 oz per million vehicle reduction, if automakers prioritised the production of higher-margin, platinum-utilising vehicles.

It calculated the corresponding move in palladium would be an increase from 105 000 oz to 109 000 oz, highlighting that palladium was less sensitive to changes in the vehicle production mix than platinum.

WPIC stated that platinum’s attraction as an investment asset arises from: